The hype is real.

We've been all sorts of places lately in Magic, from the horror world of Innistrad, to the guns and gangsters of Streets of New Capenna, to the Wizard World of Strixhaven, to the Norse-mythology inspired Kaldheim, but sometimes it just feels good to go home.

Dominaria United is our return to the original Magic plane that was the setting for the majority of Magic's sets for the first 10 years of the game, as well as the home to some of Magic's most iconic characters. And of course, Phyrexians are back too to muck it all up!

At the time of writing this a little over 200 of the 281 cards in the set are spoiled, which means it's time for first impressions in the form of my loves/hates! Note that these are not just static rankings. The point is to shed light on cards I think are being over or undervalued based on first impressions. The point of my Loves/Hates article is not just to call cards good or bad, but to view cards based on the first impressions people have been having or are likely to have. The goal is to dispel undue hype or to draw attention to cards that are being overlooked.

Whoa boy what a place to start!

I am personally most excited about my preview card, Rundvelt Hordemaster being a goblin and all, but realistically all three of these new lords for famous Magic tribes are excellent and have a chance to see play across multiple formats with loads of tribal support.

Rundvelt Hordemaster is the best of the bunch, providing Goblins with their first ever two-mana "lord," but that's not the exciting part of the card. Rather, the triggered ability that allows you to potentially burn through your deck and vomit out Goblins is extremely exciting. This is great insurance against sweepers and removal, but perhaps even more important is how well it plays alongside Skirk Prospector. Whenever you are able to turn a resource into both mana and cards, you've usually got a winner. Throw something as simple as Mogg War Marshall into the mix and things start to go crazy.

Elves do already have a two-mana lord, but once again it's the ability that makes Leaf-Crowned Visionary so exciting. Glimpse of Nature is currently banned in Modern it's so good, as well as the cornerstone of Legacy Elves, which makes sense because Elves decks are typically very good at making tons of mana and are always looking for good ways to spend it. Turning every elf into a cantrip is big game and is especially good against sweepers, typically the bane of Elves decks.

The last of the trio is Vodalian Hexcatcher, which is also exceptionally good. Again, the lord effect is secondary here (as well as a dime a dozen in the Merfolk tribe) to the other two abilities. While most Merfolk decks often play out like aggressive creature decks, having flash means that Vodalian Hexcatcher can play well with counterspells which is excellent, while the activated ability allows you to trade on board Merfolk for your opponent's key spells on the early turns which can be game winning.

The only real downside to all of these cards is that they are only base 1/1s, and thereby very vulnerable to Modern format staples like Wrenn and Six and Fury, but those cards tend to be very good against tribal decks anyway. These are very exciting!

Sheoldred, the Apocalypse is a very strange card.

We've been seeing various Phyrexian praetors popping their ugly heads up across the last few sets, but they've all been big time heavy hitters. Jin-Gitaxis, Progress Tyrant copies your spells and denies your opponent's spells; Vorinclex, Monstrous Raider is huge and doubles your counters while denying your opponent's; while classic older praetors like Elesh Norn, Grand Cenobite also have huge effects on the game.

Sheoldred, the Apocalypse doesn't really feel big like those praetors do, and she's supposed to be the big bad of the set! Instead, she feels more like a Siege Rhino-midrange sort of card but falls a bit flat.

A 4/5 for four is a passable stat line this day and age, while deathtouch doesn't make a whole lot of sense on a larger creature. Rather than getting the life value up front like on Siege Rhino, you instead get it slowly as the game progresses - better if Sheoldred lives for a while, much worse if she is killed immediately.

Sheoldred isn't bad per say, but I'd expect either a better or bigger face card than a middling midrange card that probably won't see much play.

From ho hum to oh wow!

Leyline Binding is an extremely powerful new take from the Oblivion Ring school of removal, offering many exciting benefits for multicolored decks. Having flash is huge, allowing far more flexibility than sorcery speed removal, but the big draw here is that cost reduction. With a single Triome in play Leyline Binding is already better than Banishing Light, but once you get it down to two or even one mana we're talking about something really special. I'm older formats with fetchlands this will be comically easy if desired, and being able to hit anything while dodging popular cards like Prismatic Ending, Portable Hole, and Abrupt Decay is great.

There's also value too in putting a six-mana permanent on the battlefield for cheap as well. Something like Enigmatic Incarnation can easily turn your Leyline Binding into a busted 7-drop like Agent of Treachery, Titan of Industry, or Koma, Cosmos Serpent way ahead of schedule.

There's a lot of good stuff going on with Leyline Binding.

Do the Phyrexians have no shame?

The Weatherlight was once the ship of heroes during the first invasion, but has now been twisted and compleated. That's a pretty wild heel turn in the story, but as for the card itself I'm not too impressed.

At first glance, Weatherlight Compleated looks to have a lot in common with past tournament staple Heart of Kiran - it's a cheap legendary vehicle that isn't easy to crew, but that's where the similarity ends. Weatherlight Compleated isn't just hard to crew, it's impossible to crew until you have four creatures die on your side of the battlefield. That's a lot to ask! In the meantime, it plays sort of like an enchantment giving you a small benefit for each death, as you get to scry 1, and only if you manage to get it to seven counters you'll start drawing cards.

I'm always a sucker for a sweet prowess creature, but Electrostatic Infantry checks off a lot of boxes.

The most obvious comparison is Sprite Dragon, a card that has seen a good amount of play across various formats, but Electrostatic Infantry trades in flying for trample, as well as an extra point of toughness, a much easier mana cost, and the surprisingly important Wizard typing.

While Electrostatic Infantry probably doesn't make it in Modern, the card looks very real in Standard, Pioneer, Explorer, and Historic, giving spell-based Red decks not only a great scaling threat but also another Wizard to give them access to Wizard's Lightning. Getting to play Lightning Bolt in non-Lightning Bolt formats is a huge deal and Electrostatic Infantry does a good amount of the work to get there.

There's a huge difference in attacking for two or attacking for three, while the enlist mechanic seems almost purely made for Limited as it's far too restrictive to be reliable in Constructed. This means you're playing a Grizzly Bears with some extra flair in Constructed, which isn't really acceptable unless you're really looking for a Soldier or discard outlet.

Guardian of New Benalia has a lot of words on it, but it's exactly "fine," nothing more, nothing less.

Silver Scrutiny operates as a sort of Inspiration / Jace's Ingenuity / Mindgeyser triple split card, giving you a tremendous amount of flexibility all at very reasonable rates. All three of those cards (or their variations) have seen competitive play at one point or another, so Silver Scrutiny avoids the common pitfall that most modal cards have of being too often off rate. You're getting a very solid card draw spell, usually at instant speed, that can be tailored to fit the needs of the current game that you're in.

There will need to be a decent draw-go style control deck, complete with some good counterspells, to make Silver Scrutiny really shine, but if that deck exists Silver Scrutiny will be the centerpiece. 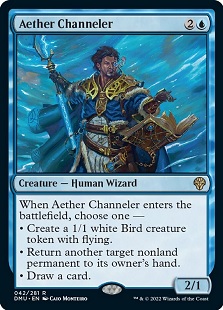 As mentioned about Silver Scrutiny, the biggest issue with modal spells is that you're often not getting a good enough rate to make up for the flexibility. When you look at something like Obscura Charm, you see flexibility, but the reality is you're just paying three difficult to cast mana for an Eliminate, Unearth, or Envelop, and therefore it's rarely a good deal.

Aether Channeler joins Charming Prince and Callous Bloodmage as creatures that enter the battlefield to "charm." You get to select from three somewhat overcosted effects and the flexibility provided is supposed to make up for the lack of rate. Both of those cards have seen very little play (unless they were being used specifically for one of the abilities - Charming Prince for blink/Yorion loops and Callous Bloodmage as creature-based graveyard hate) - and Aether Channeler is likely to follow suit except for special cases.

Standsteppe Outcast, Man-o'-War, and Priest of Ancient Lore are all passable cards, but they are not Constructed-level cards.

For very specific decks that have deck-building requirements (like a high creature count for Collected Company) or limitations (needing to play human creatures to make a Cavern of Souls/Ancient Ziggurat mana base work), Aether Channeler is definitely an option and will see some play, but this is not going to be a card you just play on rate.

By the time this article is published the full card list for Dominaria United should be out, which means I'll be going through my usual new set content run. That means a complete set review of all the cards for Constructed and Limited, a Bronze to Mythic draft run, and most importantly my Ten New Brews! Standard has actually been pretty awesome lately and I can't wait to starting building decks for post-rotation Standard with Dominaria United cards! 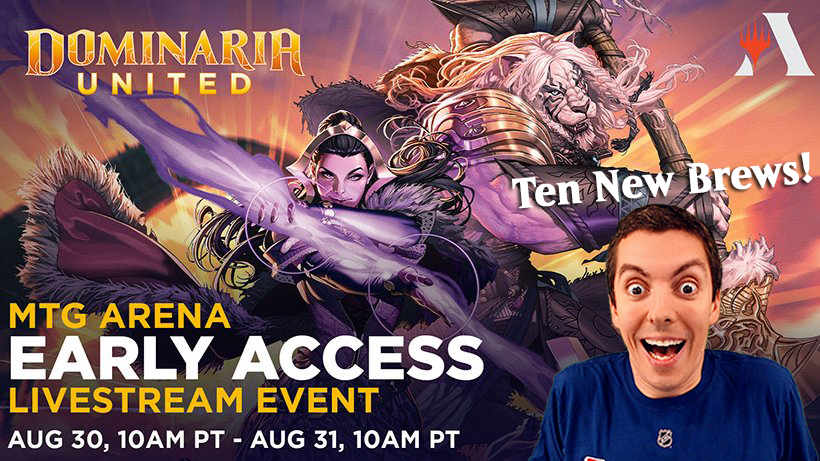 Thanks to Wizards of the Coast I'll be taking part in the Early Access Event on Tuesday, where I'll have a fully stocked account and one day to play against other content creators! I'll be building usual Ten New Brews and playing all of them, which will end up on my YouTube, but most importantly right here next Friday where I go over all ten decklists and give the full breakdown on what worked and what didn't.

I'll see you there!