Too often it's easy to focus on the negative rather than the positive. We often put ourselves into a mindset that "good" things are normal and the way it should be, while "bad" things operate outside of this axis and ruin the normal we expect for ourselves. This can make it hard to appreciate the good things, while also making us extra critical when things go wrong. This is especially so when things go wrong with something we care about deeply.

Magic has been around for 25 years because it's the best game ever made. Has it been a bumpy road at times? Sure, but we all play and continue to play Magic because the good always outweighs the bad by a significant margin. 2019 has been a rocky year for Magic, but that doesn't mean there haven't been a bunch of awesome things as well. So, in the spirit of Thanksgiving, I present...

The Five Things I'm Thankful For From 2019 Magic

It's hard to pick only five, but here are the five things I'm most thankful for from Magic in the year 2019. Some are big picture, some a little more selfish to me personally, but all are awesome and come together to show that 2019 was still a great year for Magic despite the issues.

The Return Of The SCG Tour Player's Championship!

The SCG Tour Player's Championship remains to this day the coolest event I've ever had the privilege of playing. An end of year, 16-person event celebrating an entire year on the grind with the best and most dedicated 16 players the SCG Tour has to offer battling it out in a three day, Hunger Games-style event makes for must see TV.

Seriously, the Player's Championship is literally just The Hunger Games.

SCG flies all sixteen players to Roanoke, where you have two days of wining and dining with your fellow competitors and SCG brass, as well as a media day where you're driven to the SCG home base to record interviews and take photos. Everyone smiles and shakes hands, but everyone also knows that come Friday it is kill or be killed. Your good friend you worked with for the event and travelled with all year? Sorry... you're in my way.

This creates an intense and exciting atmosphere where there's a lot of tension and secrecy going into the event. Metagaming is everything, as if you can figure out where you think the other 15 players are at there's a huge opportunity to gain an edge by going a bit off the rails. When Joe Lossett won in 2016 and when I won in 2015 it was both off the backs of risky metagame decks in Standard that were specifically built to prey on the expected field. With elimination always looming each round matters and you can see the tension on each player's face. 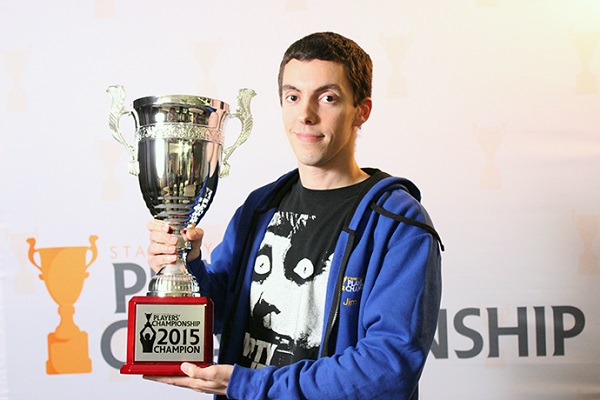 Sure, maybe I'm a little biased toward the event, but there's no doubt it is a fantastic year end event. While I'm a bit sad to be missing my first ever Player's Championship this year, seeing the excitement of all the players who are playing is awesome.

May the odds be ever in your favor!

Speaking of awesome events, I had the pleasure of being at PAX East this year to witness Magic's first Mythic Invitational ushering Magic into the esports era.

Instead of just a table with a judge and chairs, we get actual production values! A big stage! Pyrotechnics! An audience! A palpable air of excitement! Tons of prize money! And best of all a fantastic broadcast crew hosted by none other than esports legend Sean Day[9] Plott! This is so important for the growth of the game, and we've seen this template replicated with the MTG Arena Mythic Championships all year.

If you're a longtime grizzled Magic player who's been watching Pro Tour coverage since before you could actually make out what cards are in play this may not seem that important to you, but it's hard to undersell how important having Magic's premier events look like premier events to a casual viewer is. Esports is the name of the game right now, and Magic deserves to be right there alongside the other esports titles. If you want to #paythepros and have Magic grow to be bigger than it's ever been, this is the way it's done. And, of course, it helps that MTG Arena is awesome and doesn't look like it was made for Windows 98.

Okay, maybe this one is a little selfish, but it feels great to see old friends back again.

As someone who's been playing Goblins since, well before you could actually make out what cards were in play on Pro Tour coverage, seeing old friends enter the Modern format feel great. Goblins had mostly fallen by the wayside in Legacy, but with Goblin Matron joining the fray with Modern Horizons and Goblin Ringleader getting snuck into Core Set 2020, we had basically everything we needed for Modern Goblins to be a thing. So much so that I brought Goblins to Mythic Championship IV in Barcelona!

While I would only end up going 5-5 with the deck (1-3 vs Hogaak), the deck showed significant promise and it felt like putting on an old comfy pair of shoes. I hope to work more on the deck in the future, but if you missed my content about it make sure you check it out!

An Exciting New Format In Pioneer!

There's nothing quite like a new format, and Wizards of the Coast dropped a bombshell on us in late 2019 with the introduction of the new Pioneer format!

With Legacy on life support thanks to the reserve list and Modern getting increasingly powerful and expensive, the Pioneer format was created as a bridge between Modern and Standard. When Modern was created it was meant to fill this role between Legacy and Standard, but that was over a decade ago and the divide was getting too wide to manage. Enter Pioneer.

Playing a ton of Pioneer the last month or so has been my Magic highlight of the year. Part of that is just due to the fact that exploring an unexplored format is just about the most enjoyable possible thing to do in Magic, but the gameplay feels in a very nice space. It feels like Standard where you're actually playing Magic and normal things like tempo and card advantage matter, unlike in Modern where things are much more degenerate. The format is still fairly open and there are still a million things I want to explore.

New formats can't come along that often, so enjoy them as much as they can when they do!

Wait what? Don't we hate Oko, Thief of Crowns?

Oko may be a design mistake, but the fact is that Simic cards have often gotten the short end of the multicolored stick. Trying to properly populate the Simic section of my Cube has always been a huge pain compared to basically every other color pair but the similarly unexciting Izzet. Cards like Trygon Predator and Edric, Spymaster of Trest haven't aged well, and beyond that there's what... Shardless Agent and Mystic Snake? Compare this to Bloodbraid Elf, Knight of the Reliquary, Baleful Strix, and Vindicate and it's a bit embarrassing.

Yes, they missed way to high on Oko, Thief of Crowns and Hydroid Krasis can be annoying at times too, but pushing cards is what makes Magic exciting. I'm happy to add both cards to my Cube, and happy to see that Simic can have more of an identity than +1/+1 counters and inefficient creature-based spell effects.

The Future Is Now!

The year 2020 looms, and if video games and pop culture has told me anything it's that things are going to get very futuristic.

How will MTG Arena and the foray into esports continue? What is to come of Legacy and Modern now that Pioneer is here? Will we ever get a Standard format where cards don't need to be banned? What is the future of the MPL? Will all future articles be nothing more than never ending sideboard guides? Will they reprint Gempalm Incinerator so I can really have some fun?