One of the most difficult things for Magic this year has been the effect COVID-19 has had on tournament play. Quite simply, "the Gathering" has been one of the things that made Magic, well Magic, and losing that element has been tough. There's just nothing like being up at 1am in your hotel room trying to figure out that last sideboard slot, or the Sunday night dinner and drinks to celebrating success or just commiserating failure.

I miss traveling to events!

As such, it's not really surprising that it has been a bumpy year for Magic Organized Play. There are other issues for sure, but not being to hold large, in person events has made things very difficult. However, there has been one shining spot when it comes to tournament Magic in 2020: 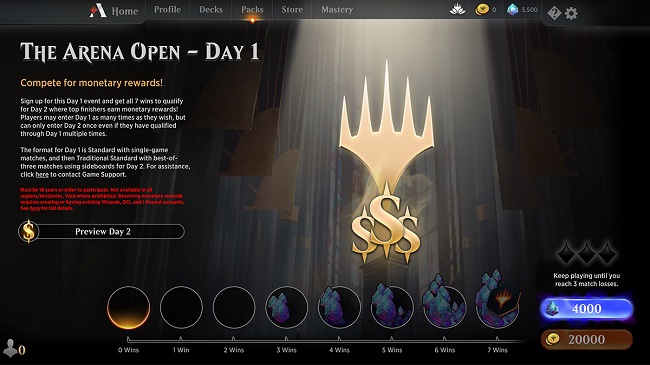 The MTG Arena Opens are one of the best things to happen to tournament Magic in years.

One of the biggest issues with playing online is that it can feel like it doesn't have any major purpose or end game. With Magic Online you were playing in leagues or drafting to try and accrue more event tickets or packs, while there was also the Magic Online Championship Series and PTQs as well as weekly challenges. On MTG Arena there's the ladder, but that can feel like an endless grind sometimes where the hamster wheel never ends.

The MTG Arena Open is a simple, two-day tournament that you get to play at your own pace and if you do well you can win up to $2,000 cash. No qualifier for qualifiers, no camping the ladder for a month, no confusing systems - sign up, play and win, get cash. This is largely refreshing as most players have no idea or concept what is happening right now with Organized Play other than "if you're in the MPL or Rivals League life is good."

So, let's take a quick look at the details and then get to the advice. 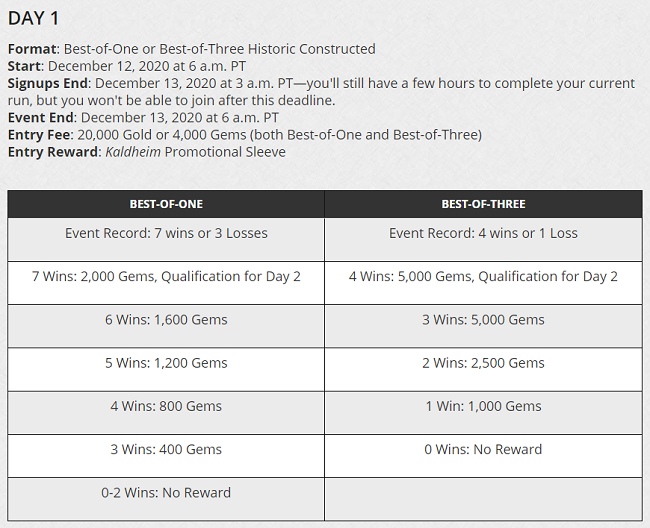 For day one you have the option of Best of One or Best of Three play, with different win/loss requirements for each. The entry fee is 20,000 gold or 4,000 gems, which sounds steep but in reality is about $20 - far less than entry into a Grand Prix or SCG Tour open and without any travel costs. You may also enter as many times as you would like. You'll have most of Saturday to play up to nine matches at your own pace, getting the requisite number of wins before losses gets you to day two. 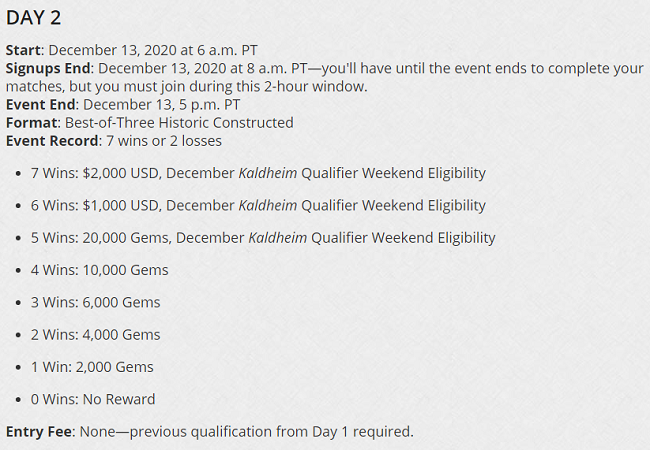 Day two is where things get serious. There is no entry fee and are no rebuys; you get the one shot you earned on day one and that is it. It is very important to note that you only have a small two hour window at the start of the event to sign up and if you don't sign up in that window you're out of luck. Don't be one of the saps posting on Twitter about how mad you are you missed it (yes that was me once)!

Once you start playing you are, again, playing at your own pace and trying to get seven wins before you take your second loss and are eliminated. It is only Best of Three play and you may play a different deck than you did on day one.

The prizes for day two are substantial - only one win will combine with your day one prize to break you even for the weekend, while anything more is profit. The gems scale up rapidly with wins until you get to the cash: $1,000 for six wins and $2,000 for seven wins, a very fine prize for a weekend's worth of play at home. Five or more wins also allows you to skip the ladder and insta-qualify for the next Kaldheim Qualifier Weekend.

So, with the logistics out of the way, you've got some big questions to answer.

What Should I Play?

The format is Historic and the competition will be very serious, so you're going to want to bring your best. 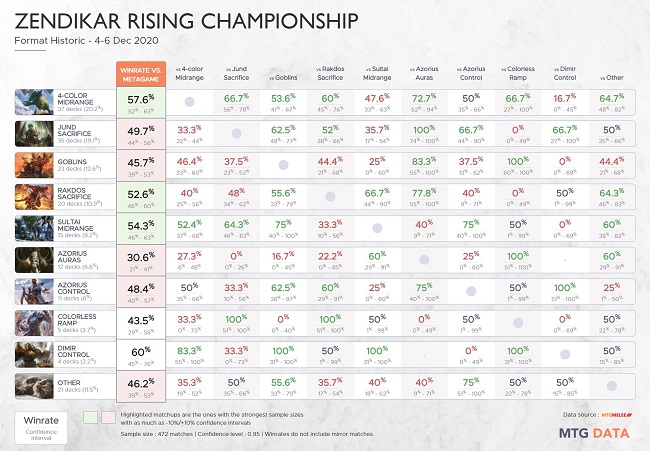 With the Zendikar Rising Championship last weekend we got a very good look at high level Historic play and what the format looks like, and while the finals may have been Goblins against Azorius Control the story of the event was the domination of Uro, Titan of Nature's Wrath midrange decks. The entire rest of the Top 8 was all three and four color interactive Uro decks and it was the second most played deck in the field after various Sacrifice decks. Having a plan for Goblins and Azorius Control is nice, but you must be sure to have an at least passable matchup against Uro and friends or you're going to be in trouble.

So exactly what to play?

Honestly at this point you're probably not reinventing the wheel. The most important thing you can do is a play the deck you are most comfortable and practiced with, as that preparation makes the stress of a big event or a big pressure money match much easier to handle. You don't want to be playing your win and in for day two, or even worse your big match for actual cash, and be asking "hmm... how should I sideboard in the mirror?" or "am I the beatdown or control deck in this matchup?"

Make sure you have good plans for the top decks and let your experience guide you.

Best Of One Or Best Of Three?

Perhaps an even bigger question that "what deck" for day one is which queue do you want to join, Best of One or Best of Three.

If you follow my content at all you'll know that I almost never play Best of One. Almost all serious tournament Magic is played Best of Three with sideboards, as it has been done for over two decades. However, the Best of Three queue is pretty punishing. Not being able to take even a single loss is tough, as one bad matchup, awkward game, or mana screw will have you sitting on the sidelines very quickly. The gem rewards are higher, making this more of a "high stakes" queue, but your goal isn't to win gems on day one, it's to get to day two where the real cash is. There's also a stigma among pros that Best of Three is the only "real" Magic there is, which would in theory make the queue full of more difficult competition.

The Best of One queue allows two losses and while the gems prizes are much thinner, if your goal is to make day two (as it should be) it seems to be a much better path. Despite the volatility of Best of One at times, 7-2 is much more reasonable than 4-0.

What Pace Should I Play At?

Another very interesting aspect of these events is that you play them at your own pace. Rather than playing round by round and needing to wait for all matches to complete so you can play the next round, you can simply queue up matches when you are ready and you will be paired with someone else who is waiting. Aside from the lack of downtime being amazing, this also means you can play at your own pace.

Make sure you a ready to play when you hit that start button and don't be afraid to take a break! This can be as simple as a bathroom or lunch break, but can also be used strategically. Just took a tough loss against a sideboard strategy you didn't expect out of Azorius Auras? Take a moment to check the major websites and see if there has been content put out about it you can read up on, or ask your friends how they think they would approach the situation. You can take some time to do this without feeling like the next round is looming and then queue up when you are ready.

It's also a great chance to blow off some steam after a tough loss or rough beat. Sometimes in an event you are immediately paired up for the next round or can't really risk leaving the tournament hall, but you can literally take a break and go for a walk, play with your pet, or watch an episode of your favorite TV show. You don't want to take yourself out of the competitive mindset, but you also have an opportunity and time to reset yourself before you play again.

How Many Times Should I Re-buy?

The unique feature of this event is that on day one you can re-buy and play again. This is awesome for a number of reasons, but also can be dangerous as it can border on gambling if you have those compulsions. The worst thing you can do is take a tough loss and immediately fire up another queue angrily without taking the time to decompress and calm down.

The best thing you can do is decide how many times you are willing to re-buy before you start playing. Like in poker or any other gambling activity, you need to make the responsible choice for yourself before you get actively involved. If money isn't really a concern and you want to fire off up to ten entries, sure! But if you know you can only afford to play in one or two, don't let yourself get fired up and go over the limit.

Set your expectations beforehand and then battle with them in mind, don't be making those choices in the heat of battle.

One of the most important things to remember is that you are still playing a game.

Wanting to win is great and being competitive is great, but at the end of the day you are playing a card game where there are a whole bunch of variables that help to determine your success or failure. Less than a dozen matches is a relatively small sample size in the grand scheme of things and many more people are going to lose this event than win it.

It's important to mentally prepare yourself for this by understanding that you may do well or you may not, but your overall goal is to have fun and improve yourself as a Magic player. You should never feel like if you do poorly that you have wasted your time or money (assuming you set proper limits for yourself). You gave yourself a chance to do well in an event and should hopefully be coming out of it with more experience and more tools to improve yourself as a Magic player.

That's the real goal - the big picture concept that your goal is to improve as Magic player over a long timeline, not just one event. If you can consistently do that, your time in the money will come. If you let a bad event sour the experience, you will neither learn nor grow. The best Magic players in the world still only win 70% of their matches and have bombed out of more major tournaments than they could possibly count.

I'll be playing and streaming the event too, as well as many other Magic players and content creators from all over the world. While it does stink to not all be in the same room having a shared experience, these events are still a load of fun and I've really enjoyed competing in them.

Good luck and don't forget to look at the big picture!