Get ready to raise Mjolnir!

Kaldheim is upon us, bringing to Magic a new plane filled with Vikings, gods, dwarfs, and frost giants! The first few preview cards for this Norse mythology-inspired set have arrived, so let's waste no time and jump right in! 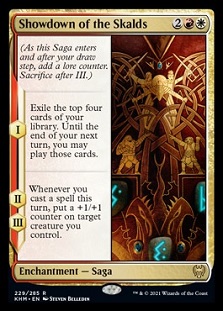 One of the biggest problems Boros, and the color White specifically, has had over the years is being combat focused while having few avenues for card advantage. When there's a great planeswalker legal, like Gideon, Ally of Zendikar White can overcome this with the advantage he brings, but for the most part White is left in the dust while every other color is drawing cards and/or producing never ending threats.

Red has solved this problem with the "top card Exile" effect first seen on Chandra, Pyromaster that has become a core part of the color's identity. It is card draw, but it feels impulsive and very Red. Blue draws cards naturally, Black at the cost of life, and now Green just draws cards and does whatever the hell it wants and White tends to suffer.

Well, this problem hasn't been solved yet, but here's Red to help give White some help!

Showdown of the Skalds gives us the return once again of the excellent Saga mechanic, which plays out like a sorcery version of a planeswalker across multiple turns. Remember that Elspeth Conquers Death is still legal, so these being enchantments may matter.

The first chapter of Showdown of the Skalds is very reminiscent of Escape to the Wilds, a card that is currently banned in Standard. However, there are some key differences. Five is more than four, and while that extra land drop may have felt more like flavor text it was very self-synergistic with exiling five cards you need to play all in one turn. Escape to the Wilds was also Green and best used as a ramp payoff, while Showdown of the Skalds will probably need to be played in a more low-curve aggressive deck to make sure you can cast the spells and make use of the other chapters.

Chapters two and three are directly creature and combat related, further distancing this from Escape to the Wilds. You're going to want to have combat-oriented creatures in play when you untap with Showdown of the Skalds and be able to cast all the spells you hit. This is a bit of a tall order, but very powerful if it works out.

Showdown of the Skalds is a powerful card, but fairly niche. It fit the "card advantage aggro curve topper" role previously filled by cards like Experimental Frenzy or various planeswalkers, helping the aggressive deck gas up in the midgame if the initial blitz didn't work. 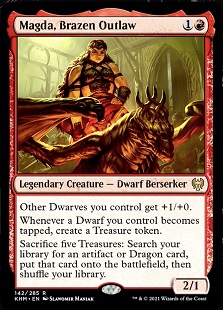 Wily Goblin eat your heart out!

Lotus Petal is a powerful Magic card, so a tribal lord 2-drop that produces Lotus Petals while also pumping your team is something that must be respected. While not a true lord in the +1/+1 sense, Magda's reasonable body more than makes up for it. Magda is likely playable even without this lord text, so adding it on is quite the bonus.

So, let's get to the real meat here, the Treasure Token abilities. Captain Lannery Storm saw mild play at three mana, and while she had haste to allow for immediate production Magda can do a very similar thing if you already have a dwarf in play. Furthermore, vehicles are in the set and tend to play well with dwarves, meaning you can crew immediately. This has the potential to produce quite a bit of extra mana and material very quickly.

But that's not all!

If a bunch of Lotus Petals wasn't enough for you, you can actually sacrifice five treasures to search for any artifact or Dragon in your deck and put it right onto the battlefield. There are many great applications for this, aside from just being card advantage and a surprise attacker or blocker, but I'd imagine this will be getting Embercleave in combat a good amount of the time.

Magda, Brazen Outlaw does a lot for a 2-drop and feels fantastic. 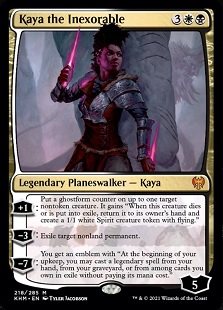 Kaya returns, sporting a new and awesome vintage Storm from the X-Men look. However, her new planeswalker incarnation is less than exciting.

Cut from the standard "5 mana walker, 5 loyalty, +1 advantage, -3 kill, -7 mostly win" planeswalker cloth, Kaya isn't very exciting. Her +1 ability is decent, but neither adds to the board nor offers her protection. It requires other cards to be good, which isn't a great place to be for a 5 mana planeswalker. It's also devastating if the creature is killed in response to the activation.

Her -3 is one of the best versions of your usual planeswalker removal, offering a near Vindicate. This is extremely powerful, as she can kill other planeswalkers as well as difficult to remove cards like The Great Henge. Due to the power level of the minus ability and the relative awkwardness of her +1 ability, Kaya feels like she will mostly be played as a five-mana Vindicate with potential upside.

As usual, she has an ultimate that puts you in a great spot but doesn't immediately win the game, allowing you to recast your legendary cards over and over again for free. This is a bit exciting with something like Urza's Ruinous Blast in Historic, but considering how often Kaya will likely be using her minus ability it doesn't feel like this will come up often.

Is Kaya bad? No, but she's not a huge draw either. I do prefer this level of Planeswalker power level to Oko, Thief of Crowns or Nissa, Who Shakes The World, but it's not super exciting from a preview standpoint. Still, Kaya will see play. 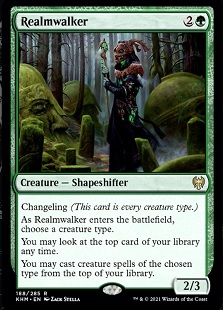 The changeling mechanic was a core component to Lorywn, one of the better tribal sets of all time, and frankly does a great job bringing together tribal mechanics by giving you many more options to fill out your tribal deck. Normally this is a bit more important in Limited than Constructed, but don't forget that party was the key mechanic of Zendikar Rising and changelings are incredible with party cards.

So, Realmwalker. Essentially Realmwalker is just Conspicuous Snoop for whatever tribe you want, which is a very solid effect. The low hanging fruit is elves, where you can cast Realmwalker turn two with Llanowar Elves or Heritage Druid and start tearing through your deck, but the application is there for essentially any tribal deck looking for some card advantage. The body isn't great, but it is more durable than Conspicuous Snoop which is nice.

This may be one of the cards to make Party work in Standard, while also having a big impact on tribal decks in older formats. 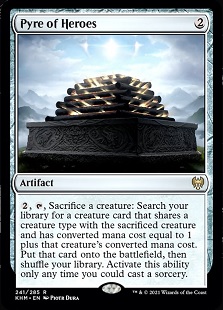 Me: Can I have some Birthing Pod?

Mom: We have Birthing Pod at home!

Of course, part of what made Birthing Pod so powerful is the motley crew of creatures you'd assemble to set up either a never-ending value chain or a game winning combo. Being tribally locked to only one creature type is far more limiting, even if you can choose a popular tribe or try to abuse subtypes (say sacrificing Pelt Collector to get a Goblin Piledriver). It's going to be very hard to set up the kind of things that Birthing Pod was able to do.

However, this is still a pretty nice sacrifice outlet and potential value engine. Decks like Humans or Elves that are about getting onto the battlefield and going wide aren't going to want this effect, but decks more concerned with value that have good fodder creatures may be. Something like Goblins which has things like Mogg War Marshall and Goblin Matron laying around, or perhaps Clerics with things like Archfiend's Vessel or Orah, Skyclave Hierophant.

There's power here, but it's not easy to use.

Modal Double Faced Cards return! Looks like we will be getting a Mythic cycle of legendary God creatures that are legendary equipment on the backside, with Halvar, God of Battle being the first.

As a creature, Halvar isn't that exciting. As a 4/4 for four the stats are fine, but messing around with auras and equipment has never been a recipe for constructed success unless you're way up there on efficacy and rate (think Kor Spiritdancer or Stoneforge Mystic). Conditional double strike is nice, but just that, conditional, while Halvar can't even do something cheesy like equip a Colossus Hammer for you.

On the flip side is Sword of the Realms which is a bit more impressive. +2/+0 and vigilance is decent, and when you tack on the ability to make the creature essentially immortal then Sword of the Realms feels like it could be a serious weapon in matchups that revolve around attacking and blocking. The problem is that if your opponent isn't interested in blocking or letting you equip before they cast a removal spell things get a bit dicey.

Still, this is a solid equipment and there are some equipment synergies from prior sets that it could slot into.

It really irks me when Wizards of the Coast gives us incomplete dual land cycles, so I'm extremely happy that the flip land cycle is now done. The flip lands are some of both the best and most well-designed duals printed in a long time. In many ways they are the perfect Standard dual land.

Can't wait to play with these!

That's all we've got so far as of the time of writing this, but it's a great start!

I've always loved tribal sets and think what Wizards of the Coast has been doing with tribal themes lately (humans vs. non-humans in Ikoria, party in Zendikar Rising) has been very interesting. I can't wait to see how it all plays out the rest of the set.