This week is the culmination of the world-building discussion I brought up in my first column here on Gathering Magic. Today, weâre going to build a world by changing one basic assumption of a fantasy settingâjust like Mirrodin did with its question: âWhat if everything was made of metal?â That question led to Memnarch, his Myr, and abducted species from other planes. There are an endless number of interesting choices for these changes, but as @Chah pointed out, to be memorable, a change must be obvious.

Now itâs time to get a bit experimental: I want to try a setting that exists completely underwater. That idea begs the question of how we can keep everything from being a blue card. Iâm not sure we can, but given the success that Wizards had in keeping Innistrad from being mono-black, I think itâs plausible. 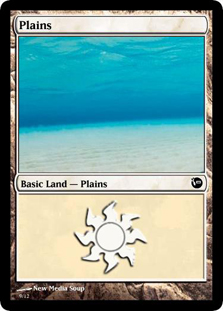 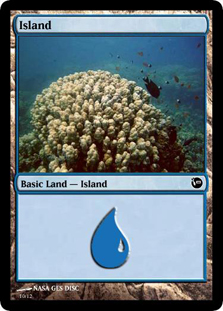 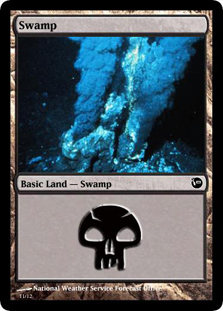 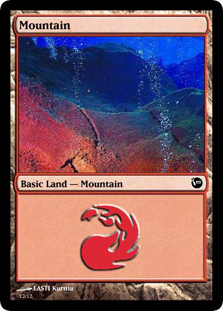 Now that we have a vague notion of the current state of things, we need to decide how they came to be the way they are. Was this plane always aquatic, or was it more conventional before some cataclysmic event? This choice will determine whether we end up with strange ruins or a different mana systemâ.â.â.âand all sorts of other details. I think things will be more interesting in the case of a disaster because that route will allow us to weave clues from the past into the first set of the block. Backstory time!

Clewug is a world that exists entirely underwater. Eons ago, the plane was much like any other, but a callous planeswalker decided to make it his aquarium and flooded the world. A few brilliant mages managed to save those around them, but most of the human populous drowned quickly, leaving behind ruins of a once-great civilization. Other species were luckier, and as time has passed, they have evolved to fit their new environment. For millennia, behemoths dominated the seas, but life was predictableâ.â.â.âUntil a new planeswalker arrived to claim the great Leviathans the first had left behind.

Kiora Atua is a merfolk planeswalker who commands the powers of the depths. Kiora venerates the huge monsters of the sea, such as the leviathans, the krakens and other denizens of the inky depths. For her these creatures embody the best the world has to offer, persistent force, time, water, predation and darkness. The conflicting nature of blue and green magic has created a very individual being in Kiora. One who values deception and knowledge but also brute force and the awe inspiring power of life. She is calm and wise beyond her years as is any good blue planeswalker but her dreams are bizarre beyond imagining. 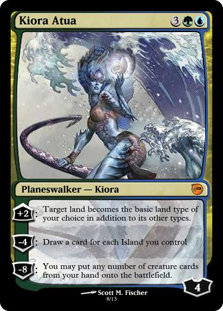 Planeswalkers are always tough nuts to crack, and this first iteration is far from perfect. First off, it doesnât feel as green as it should. On top of that, there are a lot of situations in which she doesnât do anything productive, and we want playing a planeswalker to feel great. Finally, thereâs more overlap between Kioraâs and Garruk, Primal Hunterâs gameplay than Iâm comfortable with, but the whole Sorin, Lord of Innistrad/Elspeth, Knight-Errant mirroring leads me to believe that might be acceptable if Garruk is popular enough.

The intricacies of the storyline can be dealt with later; we need to flesh the current setting out some more than just saying âitâs underwater.â First up, Clewugâs humans have remained in their native form. They canât breathe underwater, but rather, they live in bubbled cities and take their own air supplies with them wherever they go. From a world-building perspective, they could either be able to maintain a breathing spell indefinitely, or they might frequently need to return to a city to get more air. The decision rests on whether some sort of drowning mechanic akin to one found in RPGs adds to the design. 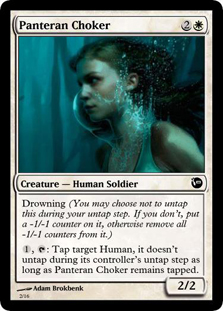 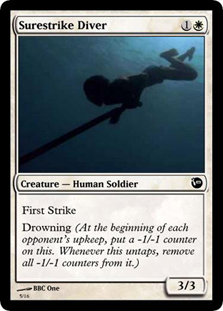 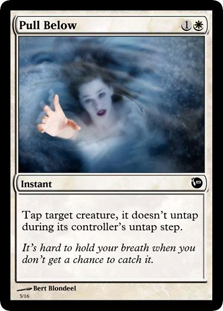 The biggest problem with this sort of approach is that drowning sucks. Even the version on Panteran Choker, which is pure upside, reads like a drawback. Wizardsâs market research seems to indicate that a huge portion of the player base despises drawback mechanics, and that means that no matter how much I like Pull Below, this isnât a route that we should go down for a major block mechanic.

Even if we opt not to go for a drowning mechanic, itâs still possible to instill the planeâs humans with a mechanical identity through their air bubbles. With the capacity to make air out of water, humans have a powerful weapon against all of their gilled foes. 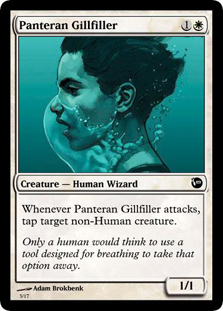 This decision, like basically any other, is context dependent. If this design was slated to happen in the next few years, Iâd want to avoid a lot of cards that care about non-Humans because itâs too reminiscent of Innistrad, but further down the line, it would be perfectly fine.

Plenty of Fish in the Sea

With that question unresolved, weâll move on to populate the landscape with some better adapted inhabitants, starting with everyoneâs favorite fish: 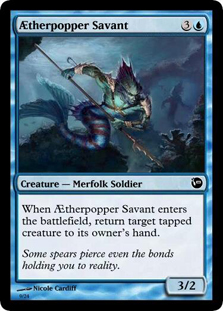 The Merfolk of Clewug feel that humankind is encroaching on their turf, never mind that thereâs no longer any other kind. As such, they routinely attack humans, but being unable to enter their air-filled bubbles, mostly content themselves with carrying off those who leave to gather food. That, in turn, makes food gathering an unsavory line of employment, and only those humans who fancy themselves warriors or who have no other skillset take on the duty.

Moving deeper, we find the Pekel. Theyâre sort of like Treefolkâor Kelpfolk, as the case may be. 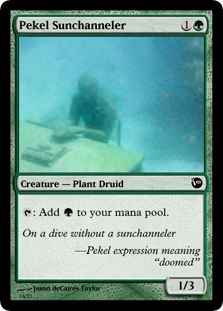 Since they donât eat anything and have no way of stopping their natural predators, the Pekel focus entirely on growth. An individual life is valuable only in its capacity to create more, so the Pekel donât consider humanity an enemy any more than Treefolk consider a rock their enemy. Itâs just somewhere very hard to grow.

In parts of the sea where there are fewer inhibitors, the Pekel often grow together into solid blocks of biomatter. Unable to move and overflowing with green mana, these concentrations are Clewugâs Forests. 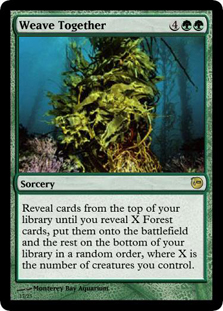 Sleepwalking with the Fishes

So, this great flood happened eons agoâhow does anybody even remember it? Letâs just say they get frequent reminders. 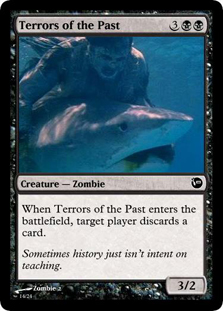 Soon after the flooding of the world, a grieving necromancer named Gahou took it upon himself to set things right. He spent months gathering materials from across what was once a continent. Finally, he was ready; he closed his eyes, and called upon the Swamps of his youthâ.â.â.âonly to find them washed away. Lost, embarrassed, and crushed in spirit, he sat alone in his house and spoke to nobody. Eventually, a pernicious Demon made its way into his consciousness and convinced him to trade his soul for the spell he could not cast. He agreed, and necromantic magic surged from his body into the corpses that littered the sea floor. Of course, by this time, they had decayed somewhat, and the surge of power did not undo that. It did, however, raise them to their feet, and there theyâve stayed ever since.

This Zombie story seems like a fairly interesting backdrop, but the walking deadâs existence lends a grimmer tone to the setting than Iâd intended. A plane filled with coral reefs seems like a prime location for a more tropical, upbeat aesthetic, but that, too, is a less pressing issue if this block is supposed to exist a long time after Innistrad.

Each of the other colors felt like it had a natural fit for this setting, but redâs at a bit of a loss. Some sort of finned Goblins are always an option, but I wanted something more fitting to act as the colorâs characteristic race. I considered using electric eels, but itâs important to have a sentient life form take up a colorâs card slots low on the mana curve. Using animals with magical powers restricts you to a tiny range of what makes sense, whereas thinking beings can have professions and thus a wider range of effects. 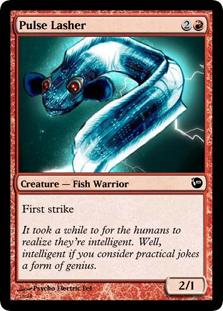 Given that, I decided to try sentient eels. Unfortunately, Iâve found it hard to convey sentience without a humanoid form. Obviously, this would be less of a problem with an actual creative department to develop a unique look for the critters, so I guess it might be fine for now. Using sentient electric eels begs another question: Is their electricity magic? If so, we could just as easily have fire.

Iâm not absolutely convinced that this setting can be done without feeling blue across the board, but this exploration has given me hope. Interestingly, I think the biggest issue may lie not in the mechanics or flavor, but in the cardsâ physical appearance; itâs awfully hard to convey the idea of being underwater without giving everything a blue background, and youâd be surprised just how much the tones in the art influence what colors a card seems to be.

Another issue is how Magicâs ionic races such as Demons, Dragons, and Angels hold up underwater. I donât really have room to explore them here, but next week, weâll take a look at some possible adaptations and alternatives. Until then, feel free to share your ideas for new setting using this method or elements of this one.