Final exams got in the way of writing anything for last Wednesday, but now that those are over and done, we can return to discussing the nautical setting I brought up two weeks ago. Thereâs been a lot of talk about bringing back old water-born races in new colors to fill out a list of civilizations, the most popular of which are the Cephalid and Homarids. I started playing with Odyssey, and after having opened some Fallen Empires, I was skeptical about Homaridsâ nostalgic appeal. But a big part of game design is observing your players, and Gatherer comments tell a different story:

IT'S A LOBSTER! :D Homaridae is a classification of lobsters with particularly large claws.

I hope they bring them back. And I'm not talking about Viscerid Deepwalker!

Yeah, I wish they'd bring back Homarids, too.

I had a Homarid/Deep Spawn deck when I was a kid. Fun times!

I want a Homarid tribal. No, seriously, I really do.. Faeries and Merfolk are cheesey. Homarids are Badass!

The cardsâ actual ratings arenât very high, but people tend to rate them based on perceived power level as much as enjoyment, so it seems that some portion of the player base is anxiously awaiting Homaridsâ return. The question is whether that portion is large enough to cater to. I donât have a good answer for that, but as Jay Treat pointed out in the comments, a lot more people are going to be expecting Pirates. So, maybe things shouldnât take place completely underwater.

I think what turned me away from the high-seas approach initially was working on Magic 2013 over on Goblin Artisans. For those of you who havenât been following the project, it reintroduces Pirates to Magic with designs like these: 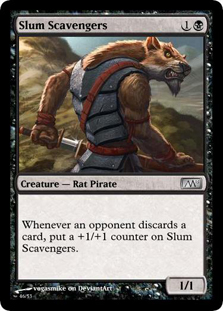 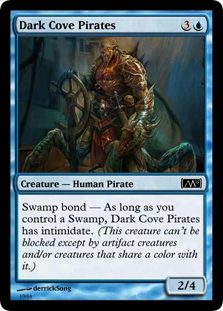 Ever since reading the last piece of Gregory Marquesâ Dark Ascension review, Iâve been thinking about how design plays on itself. As game designers, we take inspiration from everything we run across, but the easiest place to take ideas from is our own medium. You may have noticed that Iâve had a lot of Innistrad-inspired mechanics lately, but Iâm sure by this time next year, Hook blockâs themes will be at the forefront of my subconscious. In an effort to thwart this tendency, I defined the world of Clewug much more narrowly than I should have. If people are going to expect Pirates sailing the seven seas, we had better deliver.

Fish Out of Water

Expanding our scope is not without its costs; as Alex Spalding pointed out, the reason that Merfolk were discontinued around Odyssey was that they broke the land-based narrative of a wizardsâ duel. Swimming certainly isnât something exciting enough to act as a hook for the block, so our options are basically to come up with something as unobtrusive as flying or to ignore the issue. 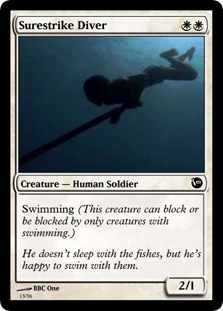 Within the Limited format, this shadow clone effectively cuts the number of creature interactions in halfânot exactly an admirable first impact. And acting as yet another horsemanship in older formats certainly doesnât help its case. The issues in Limited might be turned into benefits if there werenât many flyers, but that has other consequences. Take a look at Magicâs ionic creature types: Angels, Demons, Dragons, and Sphinxes all fly, and Iâve heard calls for Manticores to replace greenâs Hydra even though green hates flying. If we make a bunch of swimming Dragons, theyâre no more evasive than Consecrated Sphinx in a Standard format made up of Moorland Haunts and Lingering Souls.

We could also look into something a bit farther afield, like wobblesâ suggestion of a blue-hybrid-filled set with psi: 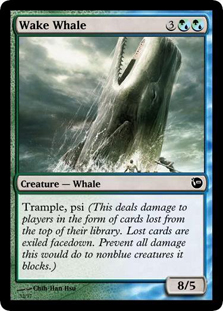 But while cool and innovative, psi forces an ocean-centric set to be about blue, and thatâs not the direction I want to go.

The third option Iâve heard proposed is ignoring the issue entirely. Magic players are a creative bunch, and it doesnât much matter if they imagine Sharks being summoned within floating spheres of water or in streams winding across the landscape so long as all of the creatures can interact with one another. Iâm all for using this sort of explanation for the numerous possible interactions that twelve thousand cards provide, but one thing kept bugging me. The planet we live on is mostly covered in water, but our civilization isnât based on it. How do we end up with a water world if we have solid land? Iâm sure something could be done with miniscule islets, but real civilization requires space, and as I contemplated all of this I was inspired by some of Magicâs older swashbucklers:

The fact that things take place above water doesnât mean they need to happen on land, and players have been clamoring for steampunk influences for ages. Perhaps Dominarian natives came to this water world in ships based on the Skyship Weatherlight, and now theyâre searching for the planeâs hidden treasures. Little do they know of the monsters that lurk beneathâ.â.â.âCome to think of it, what all is down there?

Thing from the Deep

If there was any doubt that Dragons were popular, the fact that Wizards decided it was necessary to print Balefire Dragon and Moonveil Dragon where they really donât fit should dispel it. One option is to stick normal Dragons in a less hospitable environment. 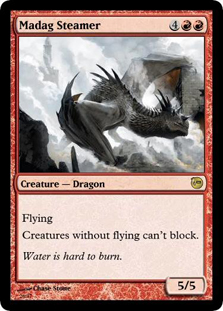 Interestingly, this top-down design using red mechanics functions nearly identically to a very different trope we could hit on in this setting. 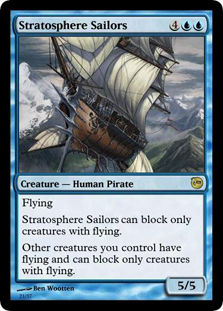 In the absence of reach creatures, both cards make your team unblockable by ground guys, but they let you block flyers; the difference is that this version lets your ground guys block flyers rather than letting your flyers block ground guys.

Thatâs all well and good, but we would be foolhardy not to try introducing some aquatic versions of the tried and true ionic races. 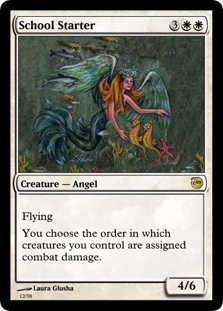 Here this thought experiment becomes pretty hard to run without a creative department. Merfolk with bird wings arenât a good approach to Angels, and itâs unclear whether theyâll fly at all. Maybe we want humanoids with enormous fins sprouting from their backs for Angels and rock formations glowing with magma for Dragons. Even though these creatures sell the set, their issues can probably be left until later in the process because rares have fewer requirements to fill and thus have little impact the rest of the setâs design. But more to the point of this column, how would one go about making the choice once design reached that stage?

To a degree, itâs an artistic choice. Whether Sphinxes are part Merfolk and part catfish or manatees with Cephalid torsos is up to the discretion of the art director, but as soon as you have a customer trying to gain some utility from your product, youâve left the realm of art. What exactly is the divide between art and design?

Take Inception. Everyone you talked to after the movieâs release would tell you it was awesome; it even made MaRoâs Top 5 favorite films, but there was no takeaway. Thatâs great design, but terrible art. Where art seeks to make meaning, design seeks to make experience, and the majority of Magic players buy cards to have the experiences this wonderful game offersânot to contemplate what the injustices of Innistradâs class system say about the human condition.

So, while building a world that is beautiful as a setting is a fine goal, it must be subservient to the needs of the game it serves. Thatâs not to say that flavor is secondary to mechanicsâif that were the case, weâd never have a card like Bonds of Faithâit means that flavor needs to add more to the gameplay experience than the mechanical elegance it supersedes. Basically, I canât tell you right off the bat how important flying is to being an Angel as Iâve never made one without it, but I can tell you that the answer to that question has a lot more bearing on this planeâs angelic lore than being able to merge them seamlessly with the setting.

Obviously, thereâs a lot more to this setting left unexplored. In the halls of Wizards of the Coast, design and world building happen concurrently, and I try to do the same here, but the linear nature of the written word makes that impossible. As Magic design is a pretty rarified subject, I donât have a whole lot of information about what really interests you. Below is a poll about the coming installment of this column, but I hope youâll take some time to share what interests you about making Magic in addition to any thoughts you have about this column in the comments.