Usually when I write about a deck, itâs because Iâve brewed up something wild and crazy that I want to share with the world. Todayâs a bit different; Iâm writing about something that the world of Theros has shared with me. 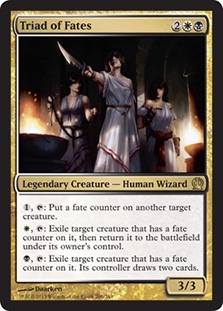 Iâm a longtime fan of Flicker effects, and I know Iâm not alone in having maligned the lack of a suitable commander for a focused deck. Well, that all ends now. Adam Styborski made good use of all the Fatesâ abilities in his preview article, but I want to really focus on the Flickering.

So, letâs go crazy. Weâre not here just to get a little bit of value every other turn, but to build a toolbox of creatures ready to blink out of existence at a momentâs notice. We need Flickering thatâs varied, repeatable, and fast.

That last partâs the sticking point. Triad of Fates is consistent, but itâs not exactly winning gold medals in the hundred-meter dash. How can we speed it up?

The Blink of an Eye

Granting haste can knock a turn off the clock, but it doesnât do much to increase the overall efficiency of our engine.

Doubling the Fatesâ activations is better, allowing us to Flicker two creatures every other turn instead of one, but it still requires a turn of setup wherein our opponents can disrupt our plans. We need to address the underlying issue: Triad of Fates canât both pick out and Flicker a creature in the same turnâ.â.â.âor can it?

Untapping the Triad gives us the freedom to Flicker a creature without prior planning; heck, we can Flicker it multiple times in the same turn. On top of that, we can add to the flickerfestTM by copying the resultant enters-the-battlefield triggers with Strionic Resonator and Minion Reflector or we can turn to the worldâs one other font of fate counters: Oblivion Stone.

So, now weâre left to wonder what exactly weâre accomplishing with all these entrances and exits. The Fates donât go in for mass Flickering like Ghostway or Sudden Disappearance, so the name of the game is quality over quantity. That is, weâre a lot better off with one Grave Titan than four Attended Knights. The same limitation pushes to have a variety of enters-the-battlefield triggers for all occasions rather than every single card that, say, makes tokens. Just take a look at my deck list, and youâll see relevant triggers scattered throughout.

"Three Shall Be the Number of the Counting"

There are plenty of Theros cards at work here. Some are obvious inclusions. 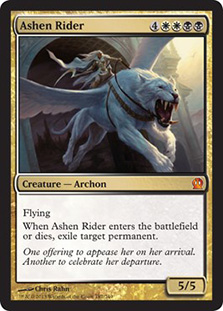 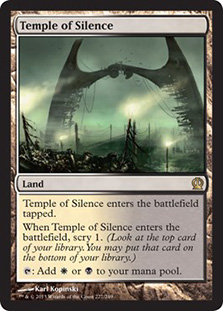 Some are less so. 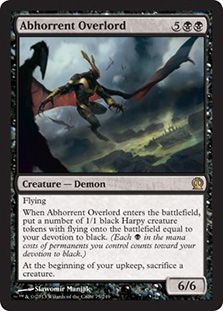 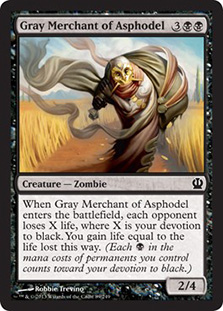 The devotion to black may seem odd given how white-heavy the deck is, but its presence underlies an important lesson. Not everything needs to be maximized. Sure, there are other decks in which Gray Merchant of Asphodel would be an all-star, but even with no black symbols besides the Merchantâs own and that on Triad of Fates, it will still be draining 9 life every time we Flicker it. Thatâs plenty to be worth playing in my book.

The oddities donât end there either. Take Corpse Dance; at first, its presence makes sense because if we bring something back and then Flicker it, that creature will stick around forever. Unfortunately, that trick doesnât seem to work too well with Triad of Fates because we need a turn to add a fate counter to it. But thereâs a workaround: Just return the creature during the end step of the last player before us in the turn order, and then add a fate counter. It wonât disappear until the beginning of the next end step, giving us plenty of time to untap and Flicker it first.

There are a few other tricks, such as blinking Flickerwisp with the Fates to let a creature survive the Wrath of God or such as putting fate counters on our own Skeletal Vampire tokens to make a Jayemdae Tome of sorts. But for the most part, this deck plays out the way youâd expect. Play a few creatures, Flicker them for fun and profit, and start beating down with an army in a canâor donât.

Much of the fun of Flicker effects is that we always have options. Do we want to stop an attacker? Untap a creature to block? Save something from removal? Get rid of Auras and counters? Reuse a triggered ability? These choices exist for each Flicker, but we have even more of them when weâre Flickering repeatedly. A single Cloudgoat Ranger lets us play tokensâa single Ashen Rider: control; Kor Cartographer: ramp. Flickering can lead to repetitive gameplay by reusing a trigger, but it also allows a deck to take a whole new approach to every game. So, if you want to know what Triad of Fates is capable ofâ.â.â.

Itâs your turn to enter the battlefield. Go out there, and uncover your fate.