If you've been following me and my content for a bit now, you may know that I have quite an affinity for Elves. One of the first cards I ever played with was Llanowar Elves and I owe a great debt of gratitude to Onslaught block Elves for kindling my competitive spirit when it came to Magic. Since then, I've played Elves in just about every format you can think of, but there's always been one format that I didn't quite enjoy the archetype in: Commander.

You see, I tried to play the usual Elfball style for a while thanks to Ezuri, Renegade Leader. The problem? While the Elfball type of strategy works well in competitive formats where you try to go off as fast as possible and outrace your opponent, it feels like the antithesis of Commander. It feels very much like you're trying to try-hard a casual format. In addition, it makes most games have a very similar feel to one another, whereas in my opinion the beauty of Commander comes from the fact that every game feels different.

Beyond that style of deck there didn't feel like many ways to go about it. Golgari had the most off-color support but even then, most of the commanders didn't quite fit what I think of when I think *Elves*. Nath of the Gilt-Leaf makes elf tokens, but it doesn't feel like quite his thing to be doing elf nonsense and it's more a byproduct of him doing discard shenanigans. Savra just sacs stuff but doesn't really make anything, Glissa does artifact nonsense that has nothing to do with elves, Izoni deals with insects more than elves... you get the idea. Even when we got the new Abomination of Llanowar, it ends up being nothing more than an oversized dork that gets blocked forever.

It's not just Golgari either. Gruul, Simic, Selesnya, and tri-color combos never really hit it right either. Tana, the Bloodsower; Radha, Heart of Keld; Obun, Mul Daya Ascendant; Momir Vig, Simic Visionary; Prime Speaker Vannifar, Mayael the Anima, and so on. All of these are fantastic cards and great legendaries, but they're all pretty medium as far as elf commanders go. In fact, one of the only other real elfball kinds of commanders is probably Rhys the Redeemed, and let's be real: if you're playing him, you're a token deck, not an elf deck.

That all changed when we got our new Commander decks for the upcoming Kaldheim and had an elf on the front of one of the two - a Golgari one at that!

Lathril, Blade of the Elves is here and feels exactly like the type of thing that you can use to make a proper Elfball deck that's a little different. She not only makes elves by attacking, but also can single-handedly take down games with her life drain ability. That might seem like a lot, but hey, if there's one thing elves are known for, it's making a lot of tokens! And so, I couldn't resist trying my hand at making a new deck out. Let's have a look!

All the usual suspects are here. You've got your dorks, your lords, your Reclamation Sage, and your Wellwisher. Draw some cards? There's the ol' Beast Whisperer. Need tokens? Lys Alana Huntmaster and Imperious Perfect have your back. And yeah, you've even got that sweet, sweet Craterhoof Behemoth to end games. What really makes this sweet is the sweet new Black toys we get to add thanks to the new legendary Commander!

Several of those other Golgari legendaries I mentioned previously (Nath, Savra, Izoni) make appearances here, as well as Rhys the Exiled and the new Harald, King of Skemfar. I even liked what Savra has going on enough that I added a minor sacrifice subtheme to the list with cards like Golgari Guildmage, Phyrexian Tower, and Ayara, First of Locthwain without it being the focus at the same time. It's absolutely delicious if you sacrifice an Elvish Dreadlord to any one of them - and then anything you don't kill probably dies anyways with Savra down.

There's also some sweet graveyard recursion we get in Golgari that we wouldn't have in your typical Mono-Green builds. Agadeem's Awakening and Haunting Voyage can both bring back tons of critters all at once (the latter filling a budget role for the classic Patriarch's Bidding), while Golgari Findbroker and Storrev, Devkarin Lich bring them back incrementally. Sometimes they might not be as effective, however, when playing a card like the new Serpent's Soul-Jar. Think of that card as more insurance from board wipes and the like if you don't have the other cards. And if you do, you can either hold this or else blow it up with the many artifact removal spells at your disposal. 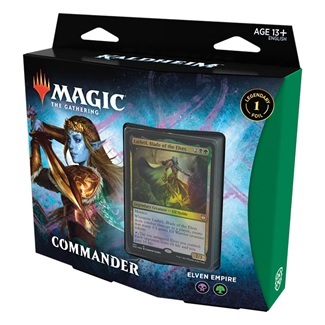 In fact, speaking of new cards, I do have to mention just how great the new Commander precon really is. There are several all-new cards in this deck (the decklist can be found here), not just from Kaldheim but exclusive to the deck as well! Several of them are present in this list, which makes this feel like a bit more of an upgrade than a fresh list. In my opinion, though, that's just a testament to how awesome this deck is. Tons of great reprints and an excellent way to put together the basis of an Elfball deck for a dirt cheap price.

If you can't afford the Craterhoof, that's fine, the precon comes with End-Raze Forerunners which does a fine enough of an impression on its own! And if you don't want to get there that way, you can always do my favorite and play bounce-house with Shaman of the Pack! Wirewood Symbiote and Temur Sabertooth both pick it up just fine all so that you can drop it right back down to massacre life totals. And if all else fails, you can do it the old-fashioned way with Ezuri and a ridiculous amount of mana that your board state can no doubt produce.

I really can't wait to get my hands on the precon and upgrade it with all these toys to put together this awesome new Elves build for my Commander nights with friends. We might not be able to hang in person, but it's still a riot when the webcams turn on. I've definitely got a ton more decks I want to build around thanks to Kaldheim and I hope you'll check them out when they go up! But for now, let me just leave you with one final note of advice: