As a kid starting out playing Magic when I was just 8 or 9 years old, playing from a competitive angle largely escaped me. I didn't really know too much about that side of the game in my formative years. I had picked up a World Championship deck by the legendary Kai Budde and saw that you could watch Magic on ESPN 2 but I had no idea about tournaments or FNM or anything like that. In fact my first TCG tournament experience was through Pokemon rather than Magic.

Instead, I turned my attention to having fun, with various cards from all five colors just mashed together with all manner of powerhouses of the day. Playing with cards I'd gotten like Sliver Queen, Survival of the Fittest, and Mox Diamond - all unsleeved, I might add, as sleeves were far from the norm at the time. It was a blast, but it was made even more fun when I found out about the silver-bordered cards from the Unglued expansion.

I found these silly cards to be a ton of fun and turned an already immensely casual experience into a hilariously great time - especially as a kid. So many cards played like normal Magic cards that merely enhanced the experience while at the same time adding an element of humor to it all. Cards like Chicken a la King, Fowl Play, and Timmy, Power Gamer had become staples at my kitchen table when playing with my sister. And if a game went on long enough, I would likely find myself dropping a copy of Incoming! to make the game incredibly silly.

A few years later, we got Unhinged. I loved it but didn't get to experience it at quite the same level as I did with Unglued, although a few cards like AWOL, Cheatyface, and Enter the Dungeon all stuck with me for some time. It would be years before I got another chance to experience silver bordered Magic with Unstable but boy was it worth it! The Limited environment was second to none and created situations such as a judge call to find out the specific collector number of a token (thanks Knight of the Kitchen Sink)

Nowadays, though, I'm a much more competitive player. It's harder to find homes for these silver bordered cards outside of somewhere like EDH with friends or maybe Cube. As such, it lessened some of the impact of Unstable for me, since now I've just got an unused box of cards from the set. It bums me out, honestly, and I keep saying that I'll make an Un-Cube one day but it never happens. 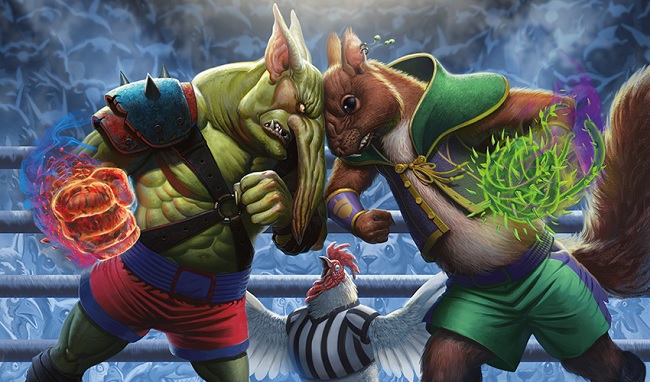 Now, however, we have Unsanctioned, and with it comes a fresh way to play with Un-cards. For those who have been out of the loop, Unsanctioned includes five 30 card decks of each color featuring nothing but silver bordered cards and a bunch of basic lands. Included with those lands are one foil full-art and one non-foil full art, plus a bunch of regular basics that have squirrels hidden in their art.

A lot of classic favorites have made it into this set, like the above pictured cards, both original Infernal Spawn of Evil cards (plus a new one), Jack-In-The-Mox, and more. For a long time player like myself, it's great to see so many classic cards all wrapped up in one sweet package, and it's a great way to introduce a new player to all of these too.

We even get some fantastic new cards added to the mix! Flavor Judge is probably the most Vorthos card ever to see print and I love it. Alexander Clamilton is both a great throwback to the clamfolk from Unglued and an excellent reference to the Broadway hit Hamilton. Spirit of the Season is nothing short of an excellent card for Cube that's not only a decent rate on its own, but changes its role in the Cube throughout the year, keeping things fresh. We even got our first silver-bordered planeswalker with B.O.B. (Bevy of Beebles). And don't forget the sweet new dragon Stet, Draconic Proofreader who fellow CoolStuffInc.com author Bruce Richards recently wrote a piece on.

Last but not least, Surgeon General Commander makes for not just a sweet card in these decks, but also a sweet General Commander with neat formatting and a funny poke at EDH Commander's name change. A number of players have also pointed out that the card references mutating creatures - something we've never seen before but will in an upcoming set. Perhaps Ikoria Lair of Behemoths? You can find all these and more right here on CoolStuffInc.com or look up the decklists in the official reveal over at Cracked.com.

The big thing about this set for me, though, isn't just the homes that you can give these sweet new cards. It's about the fact that it makes for an outstanding package to pick up and play right out of the box. If you're an experienced player (which you likely are if you're reading this article), it can make for a refreshing way to get away from competitive Magic for a short while. If you're new, it can be a fun, if maybe slightly complex, way to learn the game for the first time. This to me makes Unsanctioned a blast for all levels of skill and play, as well as something you can play as a game night. That makes it an arguably better board game-style product than, well, Game Night.

The problem here is that unlike Game Night, which features full 60-card decks, we've only got 30-card decks. The idea is that you can mash them together and then take them apart to do it with a different combination. That's not as much fun and can be a huge hassle, however. Not to mention that you only get to play one match at a time which can make this product feel like just a one-on-one experience rather than something for a big outing with family or friends.

In order to make it something everyone can play without the hassle of disassembling or reassembling, build a battle box. To do this, you're going to need to pick up a couple copies of the set and a bunch of different colored sleeves. Personally, I'm going to be picking up four copies of Unsanctioned so that way I can make the full ten guild color combinations for maximum pick up and play gaming.

Given the price of the product ($54.99 here on CoolStuffInc.com) this can get a little pricey. You don't need to go nearly as extravagant as me. You can simply buy two copies and make the five allied color combinations, the five enemy ones, or even mix them up for some other combination. If you get tired of doing it one way, you can take a day and switch them around. This is probably a more reasonable way to go about things, especially if you have a smaller group to play with. The full-art lands are also worth a decent little bit and should allow you to reasonably recoup some of your money if you sell them off. Just replace them with any ol' basic land or buy extra copies of the squirrel basics for pennies to make things match a bit more.

I'm super excited for this set and can't wait to play so many games with cards that I grew up with as a kid, and even find myself introduced to new ones along the way. It's going to be a fun time breaking out Unsanctioned, be it at my local game store or at the kitchen table. It's a product that's got something for everyone, and I'm here for that. I only hope the next Un-set comes quickly.