Whenever a new set comes out I, like many others, try to find cool new cards to build around. Strixhaven brought plenty, both thanks to the cards in the set itself and in Commander 2021. One of the cards that quickly caught my attention was the double-sided creature Valentin, Dean of the Vein // Lisette, Dean of the Root. 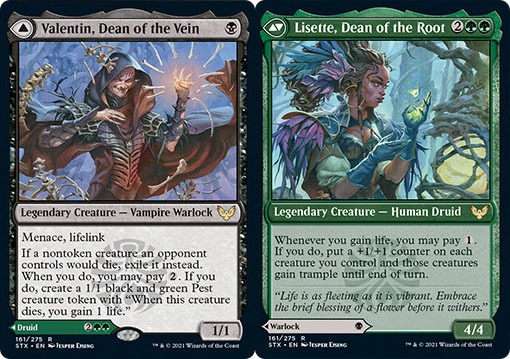 In all honesty, I barely knew anything about what Lisette's side did or what the lore of their characters were. Turns out that Valentin is a vampire who feasts on the blood of bayou creatures and Lisette is a nature witch who despises Valentin's methods. Sounds like a reasonable pair for enemy colors and ideologies! Valentin's methods are actually quite good, though, because he's quite strong in Commander.

Removing creatures from opponents' graveyards is already some big game on its own. Creature reanimation is seriously common in the format, and this is a great way to stop it cold in its tracks. No more opponents getting away with their shenanigans! If you want, you can even pay into his ability and get some tokens out of it in the process. Talk about powerful! This inspired me to build a deck around the card, so let's take a look!

So, you may have noticed it, but the deck has a bit of a sacrifice theme to it. Turns out I've been picking out a number of Commanders that just happen to work best with sacrifice themes of late. Armix and Tormod? Sacrifice the creatures so you can get them back to benefit Tormod. Sengir and Prava? Well, sacrificing tokens fuels the ol' Baron. And Hofri's at his best when your creatures are dying to double dip on their abilities. So, yeah, sacrificing.

Now we're on these two, and Valentin really likes to make Pest tokens. Not only that, but with the back side of the card, you want to gain life - which you do by sacrificing Pest tokens. So yeah, I guess Commander's just sacrifice decks and always has been!

As it happens there's still plenty of ways to get some tokens onto the field to fuel our aggressiveness as well as our sacrifice strats. Bitterblossom, Awakening Zone, Creakwood Liege, and the campus founder herself Beledros Witherbloom all spit out plenty of little critters to get devoured, or to put counters on. Avenger of Zendikar and Izoni, Thousand-Eyed can also swarm the board with tons of tokens, only to get sacrificed and be brought back with something like Phyrexian Reclamation or a flipped Journey to Eternity to swarm some more.

There's plenty to do with them as well. You can sacrifice them to the standard boring ways that everyone knows like Viscera Seer and Phyrexian Altar, or you can get a little cute using Yawgmoth or Vampiric Rites to get some more value out of the effects. If you happen to have enough tokens, you can sacrifice them to Bolas's Citadel and start taking opponents out of the game. As you sacrifice, you can reap further rewards with cards like Savra and Dictate of Erebos to wipe out your opponents' forces or use cards such as Moldervine Reclamation and The Ozolith to keep your game plan rolling.

The best part is with so many ways to gain life, you can also keep a small army of critters around and pump them up with Lisette. Cards like Winding Constrictor and Corpsejack Menace help you get your creatures buffed up faster. If you don't have the army to pump up, you can instead use creatures like Marauding Blight-Priest and Dina, Soul Steeper to take your opponents out with your lifegain effects.

If it's all sacrifice decks, at least this one does some interesting and different things from previous sacrificial lists I've put out lately. I really like a lot of what Golgari - or Witherbloom - has going on with this type of effect and it's not too much of a stretch to see Savra in the lead spot over the two deans if you really wanted to. That said, one of the coolest little benefits to having the pair in your command zone is that you can simply cast one side when you need it, and then if you need the other side later, you can simply sacrifice it and recast the other side!

I hope you enjoy this list when you try it out at your next night of Commander! After all, it's bound to be some kind of sacrifice deck, so why not make it one with two of the biggest names on Strixhaven? Give it a whirl and feast on some sweet, delicious tokens!