Livio just wanted to help people and defend the common folk from the dangers of Fiora. Having seen the horrors brought about by the wealthy of the plane's lands by way of his own family's horrendous deeds, he chose a life dedicated to the less fortunate. After all, if those in power weren't going to stand up for the common folk, someone had to. He took what he had remaining from his family's wealth and used it to buy the best training money could afford. In a way, you could say he is much like Fiora's very own Batman. 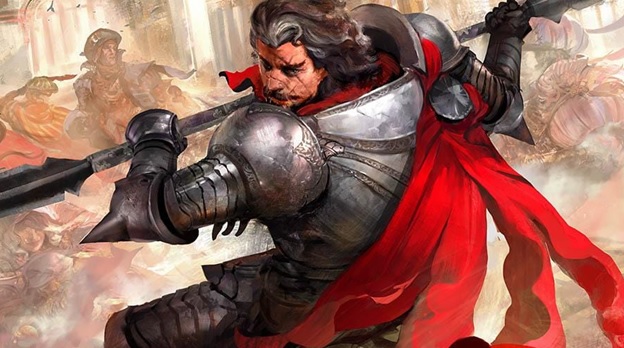 Every good hero needs a mighty sidekick, and Livio is no exception. However, when I first saw Livio I was perplexed at the idea of doing really much of anything with him. His abilities struck me at first as a sort of Parallax Wave or Helvault where you could control the board. Then I reread it and noticed the part where your opponents have to be okay with you taking their creature. That's good for some political play, but it seems kind of dull from the side where you utilize it toward your own board.

Then I found just the thing! It turns out that when you pair him with a great big tree spirit, the abilities really shine. As it happens, Kodama of the East Tree's triggered ability benefits greatly thanks its wording. Because Livio is the one putting the cards back into play and not the Kodama, we get to flood the battlefield with sweet permanents while also replaying powerful effects. Let's check out a list!

One of the first things you'll notice is that there's tons of heavy hitters in here. Tokens generators like Avenger of Zendikar, Hornet Queen, and Myr Battlesphere can swarm the battlefield very fast. Need to get some other creatures back? Karmic Guide and Sun Titan can help! Or maybe you need to blow up some stuff instead? In that case, Acidic Slime and Terastodon have your back! Best of all, whenever you "flicker" one of these creatures back, you can get even bigger value by dumping your hand in the process!

My favorite interactions, though, involve these cards:

If you've been playing Magic for a while, then you probably know the neat little trick involving Fiend Hunter and thus also Skyclave Apparition. Basically, if you target a creature and then flicker your creature while the ability is on the stack, your opponent ends up not getting a creature back! This is because it tries to either bring the creature back that hasn't been exiled yet (in the case of Fiend Hunter) or there's been no creature to get a CMC off of (with regards to the Apparition).

One of my personal favorites, though, is the card Dual Nature. It's a weird little oddity from Prophecy that I doubt very many people know about and is one of those cards I've always tried to find a good home for. With a number of token doublers and the ability to temporarily exile our creatures before the tokens enter, it actually can pack a tremendous punch here! What's more, even though our opponents also get to benefit from the ability, we can exile their tokens with Livio's ability. Or not. Causing some havoc from the card sounds fun as well!

The best thing, though? You can get multiple Craterhoofs on the board at the same time to make sure that when you want your opponents to go down, they go down!

It really does go to show you that sometimes even the most innocent legendary creatures can be built in really interesting ways. And while this deck is certainly a fairly straightforward go wide creature deck, you can also use Livio's effects - and those in the 99 - to great political gain. It turns out that some old habits die hard and this native to a world engrained in shadowy politics can still get his way, even if he fights for its betterment in the process. Give this deck a try at your next pod and show your friends what the power of Batman Livio and a big ol' tree can do!