Jumpstart is one of the coolest ideas I have ever seen for Magic: the Gathering and it's taken the game by storm. It was a smash hit on MTG Arena and is repeatedly selling out at stores when it is available. People are loving it and it's an absolute blast. But not only has the sealed product produced by Wizards of the Coast been a big hit on its own, it's caused a lot of discussion in various MTG circles about the idea of custom Jumpstart packs. This is, of course, the idea of taking the basic premise for the Jumpstart product and making your own packs to play with your friends as you see fit.

As of now, though, it's something not many people have produced a lot of content for. There was obviously a ton of talk from Gavin Verhey and Chris Mooney over what your own personal pack based on you and your playstyle might be. There was so much possibility, even, that I wrote two articles based on it, which you can find here (the first one is linked at the top of the page). As I also mentioned in those articles, my fellow CoolStuffInc.com author A.E. Marling has been writing a substantial amount of articles on custom Jumpstart packs in the vein that the product was designed.

Today, I'm going to take things a couple steps further. Let's talk about Advanced Jumpstart. What is Advanced Jumpstart? Well, you may or may not know this, but the product of Jumpstart was actually geared towards newer Magic players. This is why its release coincided with Core Set 2021, as core sets are usually seen as the launching point for many new Magic players. Given the fact that it's a fairly normal release, it emulates a lot of the Standard expectations of what a booster pack contains. This is generally some number of commons and uncommons, some lands (more than usual because we're making Limited decks here), and one or two rares depending on a pack.

In some ways, this lends to making packs less complex. Sure, it helped that a number of these cards were basic common and uncommons from a core set or else dull reprints, but they felt flavorful and cohesive despite that basicness. That's what made it fun. So now, what if we instead went and got rid of those pack construction restrictions and just built them however we wanted? What about like a Cube, with souped up power levels? And then what if we took several of these kinds of custom booster packs, pre-packed them into some Cubeamajigs or something similar, and rolled dice to randomly pick and distribute packs to play with?

It's like a Cube in a box that instead of drafting you can just pick up and play with some powerhouse gameplay. Most importantly it's a total free-for-all on how you want to build these packs - provided you have the means to do so. You could as such build it however you want. Got a bunch of ABUR duals and fetches? Cool, shove them in! But at the same time, it shouldn't be the expectation unlike a typical Legacy or Vintage Cube. After all, for those you only need one of each. For this type of endeavor, you might want numerous amounts of them, and most people just don't have the money.

There's lots of great alternatives, though. Shock lands are at some of the cheapest prices you'll ever see them thanks to extensive recent reprints courtesy of both Guilds of Ravnica and Ravnica Allegiance, making them solid inclusions in high numbers. Alternatively, you have lands like the check lands from Magic 2010-2013, Ixalan, and Dominaria as well as the ten Temples from the various Theros sets and the two most recent core sets. These are both reasonably priced and work reasonably well to help provide better mana to help your decks function better.

To show off how some of these Advanced Jumpstart packs might look, I took my own personal Cube list - which you can find here if you're interested - and made four packs out of it. Some of these are mono-color, but a few are multicolored as well. This way I can give you a better idea of how this might look, so let's start with some good old-fashioned Mono-White (you'll have to forgive me for my lack of ingenuity with themes today).

This pack is pretty easy and if you're familiar with Legacy at all, you might be able to tell where some of the inspiration here came from. No, it's not Maverick - which would look similar to this - but rather it bears a strong resemblance to Death & Taxes. You've got your Mother of Runes and Thalia, you have your Stoneforge Mystic package, some sweet spot removal in the form of Path and Swords, and even some land destruction with Ghost Quarter. Round it out with some other great goodies that are more meaningful in a Cube's Limited environment and you get something that looks like this.

This wasn't the only direction I could've taken this, though. I could've gone harder on a token focus, for example, with cards like Spectral Procession, Lingering Souls (adding some Black splash lands in the mix as well), and Cloudgoat Ranger. It could also have just as easily went less with the D&T style and more of an all-in White Weenies pile. And that's the beauty of something like this: you can build it many different ways, however you want.

Now we're talking my language! Mono-White Death & Taxes style is cool and all, but how about Reanimator Mono-Black? If there's one strategy I seriously love in Cubes, it's definitely Reanimator strategies, and here we get to distill that into some of the archetypes core aspects. There's even some extra fun things that you can do with it as well. Recurring Nightmare has a lot more potential once you start adding extra packs to the mix, creating strategies you might never think possible in a typical Cube environment.

Outside of Reanimator, Mono-Black doesn't have as much to offer as Mono-White does, but that's fine. Mono-Black Control might be an option given the amount of removal, even more so for custom Jumpstart. Normally a lot of the Black removal options and the like are better suited as being support effects, so when you mash up a pack that's full of them, you give a deck of creatures and the like a more midrangey feel. If you're worried that you might hit double the "Oops, All Removal" then maybe add something big on the top end as a sick control finisher.

Now let's do one more in mono-color:

This is exactly the kind of thing you might expect to see out of a typical Mono-Red Aggro strategy, and certainly when you've read the table right and gone all-in on the strategy. Classic Red creatures, powerhouse burn spells, and even some cards that only get to really shine in Cube like Koth of the Hammer. Once again, there's a lot of different ways to build Mono-Red Aggro, but I felt this really brought in a lot of the most iconic cards the archetype has to offer.

Some other sweet contenders might include more low to the ground creatures like Grim Lavamancer, Kari Zev, or Lightning Mauler. You could go the opposite direction and go more Chonky Red with cards like Rekindling Phoenix, Glorybringer, and Siege-Gang Commander. Heck, even Flametongue Kavu is pretty sweet there! Alternatively, there's enough actual burn spells that you could just make it all about burn and go upstairs to repeatedly smack face.

Hey, now this looks like a pretty nice deck we've put together! This looks like a decent little Boros Aggro/Midrange list that I could absolutely see myself drafting in a decent Cube. That's what makes this really fun too is that by having these packs ready to go and mashing them together, you can get play experiences like this without the drafting and deck-building. Even better, you only need two people as opposed to getting a whole group together to draft.

Let's try mixing the Mono-Red list with the Mono-Black one:

This deck, unlike the Boros one above, doesn't really seem to have a whole lot of synergy between the two packs. Sometimes that can actually be a lot of fun, allowing you to play things differently than you normally might. On the other hand, the way you're technically supposed to play Jumpstart is to buy four packs, open them up, pick two themes from them, and mash them together. You can apply this same logic to your Cube and make the less synergistic decks like this less likely to happen. Or if you're feeling frisky, you can just go all in and try something different and see how it pans out. After all, win or lose, we're here to have fun with it!

One big thing I can see people having some issue with, though, is taking the decks apart. Here, it's pretty straight-forward since the packs are mono-color. But what about when you've got multicolored in the mix? Well, why not use the brand new Zendikar Rising "checklist" cards? If you haven't seen them yet, they look like this: 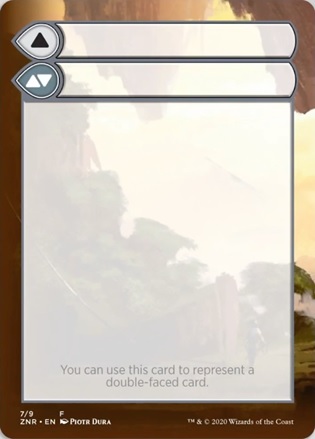 There's tons of space here to write whatever you need to, however you need to, in order to layout your custom pack list. What's more, you even have spaces at the top to denote what kind of pack they are, what colors they're supposed to be, and more. I'm not sure how well these might fit in something like a Cubeamajig - which is meant for 20 single-sleeved cards - but if this doesn't fit as well you can always tape it to the pack or something like that. It's an excellent option to have to ensure that everything gets put back together just the way you want it.

Okay, one more thing before I sign off: let's do a multicolored pack. This pack isn't as extravagantly multicolored as some of the others you'll likely see from me in the future - because I fully intend to make more of these Advanced Jumpstart packs - but it's a nice splashy take on something you'd normally find in a Cube. Let's have a look!

Yup, it's Green Ramp! But this is how it might look if you grab a couple sweet Simic cards in your draft to splash and don't exactly see enough Mono-Green cards. It's a nice light touch that lets us add a little bit of Blue to get some sweet cards like Tatyova and Coiling Oracle into the mix. Kiora, the Crashing Wave or Edric, Spymaster of Trest both would've made excellent additional options as well, but there's obviously tons of powerhouse Simic cards to choose from these days. While Uro and Oko might be a bit too much, throwing in the newly rotated Hydroid Krasis might not be a bad choice!

And with that, I'm going to wrap up this introduction to both Advanced Jumpstart and Jumpstart Cube. What do you think of this concept? I personally think this is a deep, deep well that can be drawn from for new and fresh ideas and can be a great new way to play. This is even more true in quarantine when we're not able to get with tons of people, but might have a single friend, relative, or roommate who is willing to play with you. You might not want to play with the same two or three decks over and over or you might have a Cube you can't draft because you only have a few players. Try this out instead, and may all your games be an absolute blast!