We're back with some more Advanced Jumpstart! This week we're kicking off a sweet set of articles themed around more advanced looking pack lists as I previously wrote about here. For the next ten weeks - with intermittent breaks for other relevant articles such as my eventual Commander Legends Pauper review - I'm going to be going through every one of the Ravnica guilds. We'll be going through by the order seen on the card Tablet of the Guilds starting from Azorius at the top and going around clockwise. 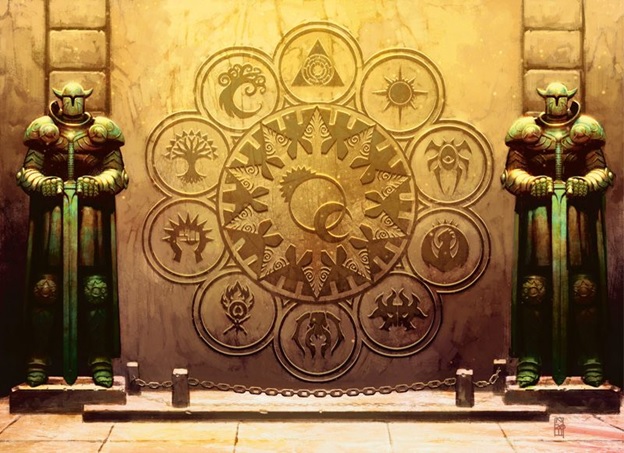 "Why start with Ravnica over the many other themes?" you might be asking. I figure that if people are going to set up the basics for a sort of Jumpstart Cube, then having a basis with the ten two-color combinations is probably a great start. The other piece of this is that with three blocks set on Ravnica at our disposal, there's a tremendous plethora of cards to choose from and work with.

For each of these articles, I'll be making four packs. The first three will be specifically built from each of the Ravnica blocks, but only limited to the sets where cards of that guild specifically can be found. For example, this week will be Dissension, Return to Ravnica + Dragon's Maze, and Ravnica Allegiance. I'm not going to be utilizing cards from outside those sets that depict guild members on them (so for example, no Compulsive Research or Flux Channeler in the Izzet packs) just for simplicity's sake. This will let us focus on the meat of each guild and hone in on the themes and mechanics at play in each specific block. The fourth and final pack will take cards from each of the sets and make a sort of super pack for the guild of the week.

So, with that, let's jump into this week's guild - The Azorius Senate - starting with a pack based on their first appearance in Dissension.

Making this pack really took me back, as I opened, owned, and played with many of these cards in their original release. I really loved how a lot of the cards played together. They're not as flashy as some of the later cards in the likes of Return to Ravnica and Ravnica Allegiance would be, but they were a lot of fun and played with some great design space.

Many of these read like playable draft commons and uncommons and that's because they are, truth be told. But they also play like spells with great abilities abound - either coming into play or by activation. Court Hussar gives you an extra card when you cast it with White mana as well, and Azorius Herald acts as a simple life gain spell if you don't have Blue. Heck, even Soulsworn Jury is a great example of a spell creature. This one's even better because it can stonewall opposing creatures - both by way of blocking and then by countering a problematic creature.

Some of my favorite cards here, though, are the forecast cards. Forecast is a mechanic where you can reveal the card with it from your hand, pay a cost, and get an effect out of it. Plumes of Peace is a slightly innocuous one, but plays well as a repeatable tap effect. Pride of the Clouds is my real favorite, being a powerful card that killed me many times over back in the day. Nowadays, you might recognize it in the similar modern version of Skycat Sovereign, but this was somewhat better because you could get the bird token without ever casting the Pride of the Clouds.

All of these creatures - and more - also fuel your card draw engine in Sky Hussar. My favorite time seeing the Hussar in action was absolutely the time it showed up in a deck called Mono-Blue Martyr at an SCG Open back in 2014. You should watch the video of its match vs. MUD from that event, because it's wild, but also shows how powerful cheap and repeatable draw power really is. While there were plenty more sweet cards with forecast in the set - like Govern the Guildless, Proclamation of Rebirth, and personal favorite Skyscribing - none of them are really a great fit for a pack like this. That's why this one feels a little more creature focused than you might expect for the Azorius. But hey, at least we get to be mean with Grand Arbiter Augustin IV.

Our land base rounds out with one of each of the common and uncommon lands related to the Azorius, as well as two Hallowed Fountains. Going forward you'll notice I have two shock lands per pack with each guild and that's because - thanks in no small part to their recent reprintings - they're cheaper than ever. This helps gives the packs a bit more oomph and also helps maintain a bit of balance with our basics at two of each.

Now let's dive into the pack featuring Return to Ravnica and Dragon's Maze.

Your first thought here might be, "But Kendra, why does this pack get two sets when the others get just one?" The answer is simple! Dragon's Maze was, frankly, a hot mess of a set, but it did give us a few additional Azorius cards to work with. Most of them weren't great, but a couple felt too awesome to leave off - especially one of my personal favorites in Lavinia of the Tenth.

Like the Dissension pack, this booster is a little more creature heavy than you might think of the Azorius. The reason for this, though, is that a lot of the cards that would seem like the sort of control-oriented style Azorius is known for clash with the creature-oriented style of Limited or else are too slow to be worthwhile. This includes Supreme Verdict - which is excellent but wipes your own creatures - and cards like Martial Law or Fall of the Gavel.

Once again, though, we're going with some sweet effects. New Prahv Guildmage, Azorius Justiciar, and Lavinia of the Tenth all detain tons of opposing creatures. Arrest - while being Azorius largely in flavor of the Azorius being like police in this block - isn't exactly an Azorius card with a watermark and such, but clearly fits the role well by shutting down an opposing creature. If you want to get creatures off the board as well and clear your way to victory, you can use Skymark Roc.

The real fun begins when you manage to stick the landing on Azor's Elocutors. Protecting it is difficult - especially in a pack like this with limited control options - but doing so is always going to be worth the story you get from achieving such a victory. And if that fails, you can always drop the big, bad Isperia, Supreme Judge and beat your opponents down with raw power and card advantage.

Because this time we don't have quite as sweet common and uncommon lands, we're just putting in two Azorius Guildgates alongside the two Hallowed Fountains. These may come in tapped, but that's fine - even when our Azorius Signet from pack one turned into the Azorius Keyrune. The Keyrune is actually a fantastic upgrade because you can turn it into an extra attacker and push some serious damage through.

We've got one more block to go through, so let's move onto the pack based on the Azorius' appearance in Ravnica Allegiance:

This pack features the least creatures of all the packs here... or does it? As it turns out, most of the Azorius creatures in Ravnica Allegiance were kind of medium and were better when you could devote a whole 40 card deck to them and draft a proper Azorius list. In something like Jumpstart where you need to work with essentially half decks, the cards don't really shine through. That's fine, though, because a lot of the other spells are still great.

Cards like Summary Judgment, Lawmage's Binding, Absorb, and Sphinx's Insight all let us play the proper control route this time around. Deputy of Detention can be some excellent removal - especially if we find ourselves against a token deck like you might find with a Selesnya pack. Senate Guildmage and Sphinx of New Prahv both round out the creatures package.

The juiciness, however, comes from the fact that we now have a planeswalker in Dovin, Grand Arbiter, and our two split cards. All of these cards actually make creatures, allowing us to still get an aggressive finish in. That said, they offer plenty of flexibility with their modal nature and can be used for other effects as well. All told, this makes the Ravnica Allegiance pack quite a formidable foe.

So now how might things look if we combined them all? Let's look!

Yup, we're just taking the best of the best out of all of the packs and slamming them together. We might as well have just all the highlighted cards all under one banner. With so many fewer creatures, I did consider something like Supreme Verdict for this list, but I thought it still worked too poorly with the creatures. This can be especially true if the pack you're combining this one with ends up being very creature heavy. The beauty of these packs, however, is that if you disagree that's totally fine! You can take these and customize them however you want. I like to think of these as more guidelines and a basis by which you can build your lists off of or to just get the creative juices flowing in general.

I do hope you enjoyed this first look into some Ravnica guild-themed Jumpstart packs! Next week we're going to keep things going with the Orzhov Syndicate. We're about to see the likes of Haunt, Extort, and Afterlife all over again. I hope you'll check in then. After all, we're just getting started!