Come one, come all, to the greatest show on Ravnica! It's the latest show of the Cult of Rakdos. We have wild fire-wielders, blood witches, and more! Just be careful, as a Captive Audience can very soon be a dead one. But hey, that's just the fun of it! We even have a brand new card in Commander Legends representing our favorite head of the Juri Revue - mister Juri himself!

But alas, we're not here to merely shine the spotlight on Juri. No, we're here to share it with all and revel in the delights of the Rakdos guild! Make way for the big man himself as we dive into another round of sweet, sweet custom Jumpstart goodness! Juri won't make an appearance in any of these packs, but he's definitely an excellent addition to any Rakdos sacrifice pack you might build.

Now, let's raise some hell and give Lord Rakdos the show of a lifetime! 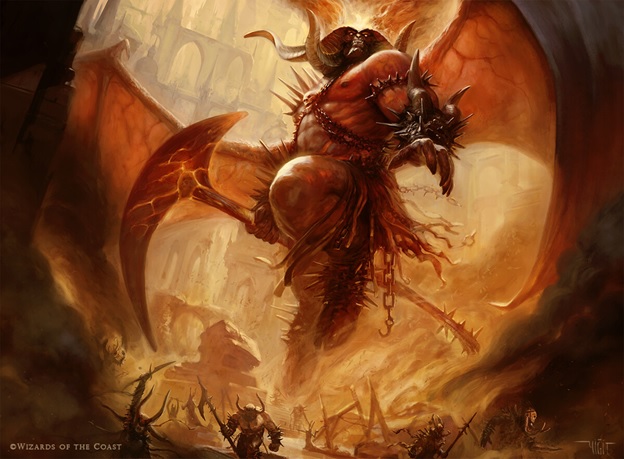 The Rakdos in Dissension were an interesting bunch, where there was a lot of interplay between the aggression of attacking and the madness of discard effects. Like most of the aspects of the Cult, there's not terribly a lot to say. These creatures attack and make players - even you yourself - throw cards away. But this can be advantageous to us, as many of the cards we're playing here benefit from having no cards in your hand.

Demon's Jester and Gobhobbler Rats get that much more powerful when you're hellbent, and iconic classic Rakdos Pit Dragon gets a monstrous double strike ability. Even something as innocuous as Slithering Shade now gets to creep up from behind and maul your opponent's life total. Cards like Anthem of Rakdos can amplify the crazed damage being dealt and Demonfire can close out the game in style.

Last but not least, if you need a little help clearing out your hand, powerhouse Avatar of Discord can help you there. It's a mighty creature that saw plenty of play in its heyday and now it's putting in work for us as well! We can also use Rakdos Guildmage to help clear our hands as well as our opponents' boards. If all else fails, there's always the mutual destruction of Rix Maadi, Dungeon Palace.

After the events of the first block, the great demon Rakdos fell into slumber, but why should the Cult stop there? The festivities are only beginning as we get into the Return to Ravnica block!

Boy, the Rakdos sure got more aggressive here, huh? Yes, you too can unleash your inner fury at the carnival tonight! In all frankness, this is one of the most difficult packs in all of the sets to discuss. Why? Well, because it's about as straight-forward as they come. Most of these cards are practically French vanilla, seeing as the mechanic of Unleash is really lacking in depth and is thereby fairly simplistic.

Even the better cards with the mechanic aren't much to talk about. Carnival Hellsteed has better stats and an extra keyword or two! Hooray! For most of your creatures, this means you're just taking the counter, losing your ability to block, and swinging the night away. There's some subtle nuance to whether or not you want to add the counter or not, such as with Thrill-Kill Assassin playing aggressively or a defensive removal card.

These cards are fairly few and far between, though. The block does have more interesting cards in Rakdos like Havoc Festival, Slaughter Games, and Rakdos Charm, but none of them play particularly well enough in Limited to be worth playing. As such, we're leaning on the simpler side of things, making this is the easiest pack of Ravnica you could hope for (outside of maybe some of the Boros ones). Pump your creatures and swing for the fences!

Thankfully, though, things look up for our favorite cult of demons and madmen in Ravnica Allegiance.

Thanks to the nature of the guild - as well as the inclusion of Red in the mix - Rakdos continues to remain a tremendously aggressive force in this set. It does manage to slow things down a little bit, however, lending more to a bit of a midrange role in the process. We're not just leaning in on simple beat-up-your-opponent creatures and instead have creatures with interesting angles of play and removal spells.

Rix Maadi Reveler, Light Up the Stage, and Blade Juggler all offer actual card advantage - and at extremely reasonable costs if you've managed to deal damage to your opponent. But even if you're not able to poke your opponent for damage, paying the normal rate isn't bad either. Hackrobat, Judith, and Spawn of Mayhem all offer fantastic ways to keep pushing damage through as well. If you're able to hit ping your opponent repeatedly as well, then Gutterbones can keep on coming back. It's a card that while not necessarily Rakdos in its watermark or anything still clearly is riffing on the spectacle mechanic.

Beyond that, if all else fails, we can jam big bad Rakdos himself to get some tremendous damage through as well as take out a lot of the board in the process. It's a gamble, but big splashy plays make great casual games, which is exactly what something like Jumpstart is all about. Make those stories and have a blast while doing so!

Now let's put them all together!

Put all together, there's a lot to love with Rakdos. The original set in Dissension was a beautiful mess of mechanics, Ravnica Allegiance played delightfully well with a bunch of different things, and RTR was so aggressive it was almost comical. As it turns out, each of these plays quite well with one another. The overall functionality of the Ravnica Allegiance cards lends to a strong core that's further fleshed out by a few of the powerful and niche cards from Dissension. In addition, RTR manages to still pull its weight quite well. It turns out that while an overabundance of basic aggro creatures can be a bit too simplistic, putting some of the better ones in a pack like this really helps fill some holes and provide solid efficient creatures.

And with that, we conclude our time with the Cult of Rakdos. As with all good shows, the curtain must fall on this one, and we must bid it adieu. This will also be my last Advanced Jumpstart piece for a few weeks, because Commander Legends is seriously exciting! There's lots to talk about between lots of sweet cards for Pauper and some classic characters I'm dying to build decks around. We'll pick these up again soon enough, though, with the Golgari Swarm. Until then, may you revel with rapturous glee!