When people see a format made up of nothing but commons , they don't think it's going to be very powerful. Those people clearly haven't seen what can happen when you play my favorite deck in the format: Elves. By now, many have seen me do numerous write-ups, discussions, and streams regarding the little green people, but it's been a while since I checked in on how the deck is faring.

In case you've never seen the deck or heard me go over how the deck functions, let me bring you up to speed on how it all works.

The deck's core game plan is to play out a few early mana dorks and create an engine for mana using cards like Quirion Ranger, Priest of Titania, and Birchlore Rangers. Priest of Titania is simply the deck's main card, easily generating obscene amounts of mana in little to no time. An opponent that doesn't answer this card in the first few turns will rapidly find themselves in a world of hurt. The mana this one card generates allows you to cast something like Distant Melody (minus the Blue mana of course) or Lead the Stampede and be able to cast most of the things you draw. All that off of sometimes just one activation.

You use all of this mana to play cards like Lys Alana Huntmaster followed by multiple other Elves to make plenty of Elf Warrior tokens. Generating a massively wide army will allow you to break through and go around even the biggest of creatures to kill your opponent. If that's not enough, you can play an Elvish Vanguard first so that every Elf made this way gives you at least one absolutely massive creature. If you don't like that approach, however, you can always utilize Timberwatch Elf in an effort to turn any single Elf on the field into a force of nature.

If an opponent is utilizing Fog-style effects such as a Moment's Peace lock from the various Tron lists out there, you can also use the Viridian Longbow as a means of taking out your opponent. You can either equip this to a non-summoning sick Nettle Sentinel for one long pinging session with a large number of Green spells or you can move it between the wide creature base you have using the mana Priest of Titania gives. You can also use Birchlore Rangers to generate extra mana in a pinch to get more Longbow shots in. Speaking of Nettle Sentinel and Birchlore Rangers, I must say that the two cards work really well together. This combo, often used as well in Legacy Elves, allows you to handily spit out one one-mana Elf after another with ease.

Lastly, you use cards like Wellwisher and Essence Warden to gain a ton of life. You may wonder if your life totals can ever get high enough. Let me show you this old screenshot of a game I played on Magic Online a few years back: 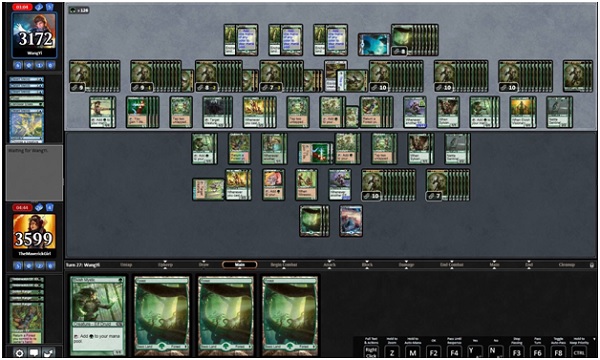 You're seeing those life totals correctly. My opponent and I ended up in a stalemate, unable to break our mirror match and get around one another. To make matters worse, both of us had multiple Wellwishers in play with Quirion Rangers to untap them for even more life. Eventually my opponent hit their Distant Melody and was able to chain it into more in order to find their lone Viridian Longbow. But by the time they found it, they only had three cards left in their deck. Once they were able to clear off my board a bit, even with multiple Timberwatch activations, they weren't able to kill me before decking out. As such, this extreme life gain can be an alternative win condition of sorts.

Speaking of the life gain, savvy readers may notice I've started running not one, not two, but a full four Essence Wardens in my main deck. This is admittedly a bit on the radical side and a good bit of metagaming. In terms of raw life gain, Wellwisher is almost always going to be better than the Warden. However, when you face off against Burn, they're likely to kill it before you can activate it. If you're up against Inside Out Combo or Izzet Blitz, they've often killed YOU before you can activate it. I've had games versus Inside Out and Blitz where I amassed a massive board state and multiple Wellwishers but they killed me by making their combo creature unblockable before I could activate for any life gain.

Essence Warden helps deal with each of these decks. You can usually use it to gain a bit of life before it's killed against Burn and can get a ton with good sequencing. Even more so, Inside Out and Blitz will often allow you to resolve something like a Distant Melody that will let you gain tons of life off of the Essence Wardens before they get a shot at killing you. The amount you gain is often so great that it can put you out of lethal range from your opponent. The fact that I'm running a full set should tell you just how prevalent these decks are currently. Burn in particular is everywhere and this card will help you stay in the game more.

Surprisingly, so will the newest sideboard card I've been running: Harsh Sustenance. For awhile I was using Massive Raid, a variant of Mob Justice, to get opponents when they least expect it. Then someone on Reddit pointed out that this card is just a strict upgrade. While the life gain is often irrelevant, as it's meant to be a card that wins you the game outright, I have found myself bringing it in against matchups like all of the above where I wouldn't before. This is because even if it doesn't kill them, it puts me in a range where I can survive long enough to take the opponent out before they attempt the same on me.

Speaking of techy decks, there's another Elves player in the online scene whose decklists have been getting a lot of attention.

People have been asking me a lot of questions about this list. There's definitely a lot of interesting things going on here. Four Distant Melodies and fourteen total lands as opposed to the usual two and thirteen respectively is highly unusual. While I see the appeal of bigger finishes off of Distant Melody, one reason I moved away from so many was because of the amount of removal in the format. As a result of the influx of sweepers, I found myself siding them out more and more often and still do.

Cookie circumvents this with a lot of sideboard hate to deal with those problem cards. Spidersilk Armor fulfills its usual anti-Electrickery role while Wrap In Vigor handles bigger ones like Swirling Sandstorm. The one really interesting card that catches peoples' eyes in this case is Hydroblast. A spell that's historically shown up from time to time in Elves lists, this can beat back sweepers while handling cards like Atog or Izzet Blitz's major creatures. It can even stop Burn dead in its tracks with a well timed usage. The reason I've never been a big fan of it is due to Elves' low number of Blue sources in the deck. Between the four Birchlore Rangers, two Sylvan Rangers, and one Island, there're only seven true Blue sources. Lead the Stampede can help get the creatures among these, but it's not a sure-fire thing. As such, it's difficult to ensure you'll have your Blue mana at the ready when you need it, another reason I've found myself moving away from high numbers of Distant Melody.

The other card that's raised a lot of eyebrows is Wildheart Invoker. The thing that Elves has long struggled with is creatures often being chump blocked. It makes punching through an opponent hard. You can even have something like a 50/50 Elvish Vanguard that gets stopped every day by a 1/1 token. The Invoker is meant to help get the damage through that you want to connect. It seems difficult to hit 8 mana, hut it's more than a breeze with the aid of Priest of Titania and your many other mana dorks. I'm not sure I'm the biggest fan of the card, but I have considered trying something like Elvish Herder before for the trample effect. So, it's definitely on the table as an option. What's more, being just a one-of, it doesn't dilute your deck all that much and can win you games you might not otherwise be able to close out.

Our return to Ravnica once again has brought with it some more Elvish goodness, albeit in rarities other than common. But there's still two more Ravnica sets to go, along with Ultimate Masters for more potential rarity downshifts. With plenty more potential options coming soon, what will the next breakthrough in Pauper Elves be? No matter what it is, you know I'll be giving it a shot, and I certainly hope you do too.