The SCG Tour is going to make its way to Indianapolis the weekend of February 22 which means I'm turning my attention to Pioneer.

The Player's Tour stops in Nagoya, Brussels, and Phoenix have kicked the format into hyperdrive. It's functionally a brand new format with a more defined metagame than in the past. Let's be honest, the format is warped heavily toward Lotus Breach and DImir Inverter. We're going to do our best to fight on a different axis.

Speaking of which I heard Team R.I.W. did pretty well in Phoenix... 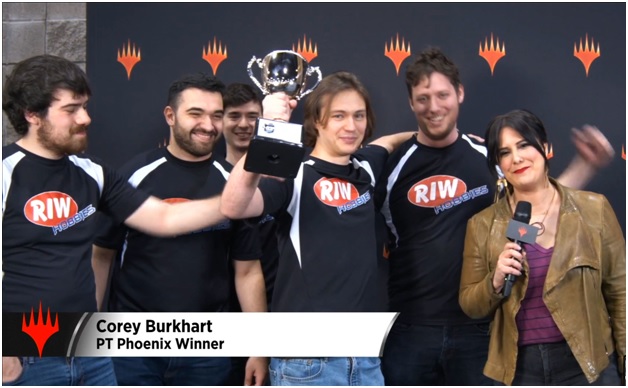 We didn't do too badly at SCG Philly either... 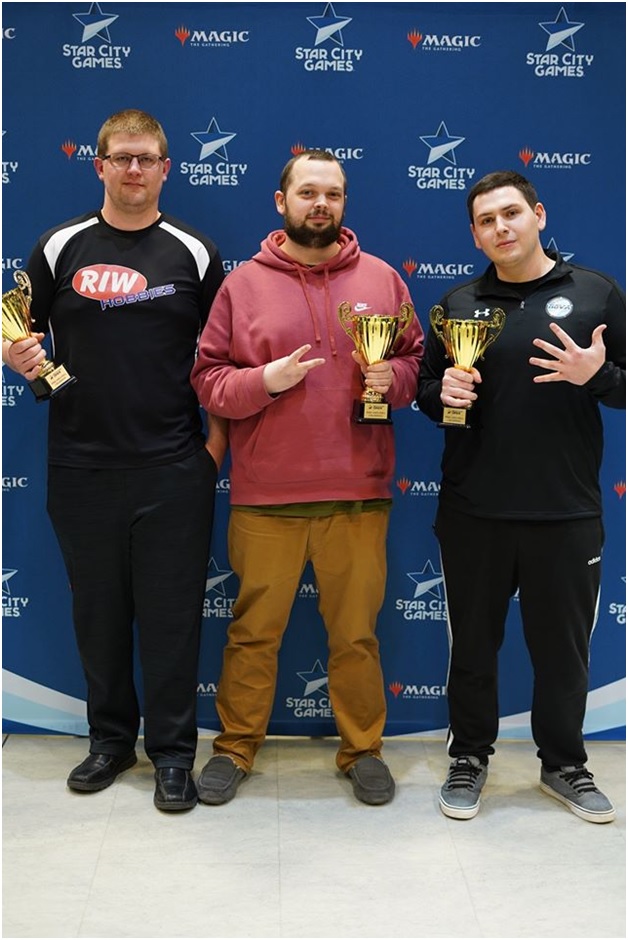 Zach is the control master and is also great.

Zach skipped the PT to keep on the SCG grind and then won it. How could R.I.W. win both trophies this weekend otherwise?

I worked with Max McVety in the weeks leading up to Player's Tour: Phoenix and we both initially liked

Spirits. We ran it through a league and went 5-0, but didn't face Mono-Black Aggro or Mono-Red. It's clear the deck has legs against combo and Inverter, but we did anticipate aggressive decks.

Azorius Spirits was well-positioned against Supreme Verdict due to Selfless Spirit. I had a feeling

Control would be pushed out of the metagame because the answers were passive. Pioneer had the tools available to fight Verdict and Azorius Charm which makes it easy to dethrone. It's still playable, but isn't well represented at the moment.

The primary issue with Azorius Spirits is mana. The dual lands fall off quickly in quality after Hallowed Fountain and Glacial Fortress. I don't want too many Plains because the eight 1-drops cost a blue. A single Port Town and Unclaimed Territory complement the eight good dual lands. I don't want to draw two copies of either land hence the split.

Green Ramp decks existed in Pioneer to fight Azorius Control which were a great matchup for Spirits. Now that Inverter of Truth is the stock Blue deck Ramp doesn't have a competitive edge in Pioneer. This may change in the coming weeks as Ramp can be the counter to Sultai Delirium. Thoughtseize is very well-positioned at the moment as long as there is a clock behind it; Emrakul, the Promised End counts.

A sure way to lose to Inverter is to try and win by going over the top. Splinter Twin-style decks are able to easily go under large threats. The way to attack Inverter is to strike quickly with creatures or play a faster combo. The fast creature matchups are challenging for Spirits because when two ships pass in the night you are overpaying for the flying ability.

Mono-Red was scary because Soul-Scar Mage negates Selfless Spirit outside of combat damage. Goblin Chainwhirler would enter the battlefield and kill several creatures. It was a bad time that got worse as they boarded in more removal.

Mono-Black Aggro's 1-drops have 2 power and come back from the graveyard while the Spirits are stuck playing defense. Fatal Push slants the race in their favor even further. Max and I found Reflector Mage to be helpful in the matchup after sideboard.

How to catch up?

Collected Company is able to pull you ahead in the mid game. This is key because the first couple turns against creatures decks are spent on the back foot. It's no wonder why Bant became the stock way to build Spirits.

The tradeoff between Bant and Azorius Spirits is Mutavault versus Collected Company. There are twelve shock lands in Bant, but that's less important given that it has a stronger Red and Black matchup. It is possible to cut the fourth Temple Garden for a Mutavault because there aren't many White cards in the deck. That change would come at the expense of playing Green cards in the sideboard.

The maindeck is fairly stock, but I have replaced two Selfless Spirit with two Remorseful Cleric. This spirit is well-positioned against Sultai, Dimir Inverter, and Lotus Breach. I mentioned earlier Selfless Spirit isn't in the right spot to want a full playset. The only matchup that gets worse is Azorius Control, but I'm willing to take that risk given the popularity of Sultai, Dimir, and Breach.

The sideboard is where I plan to gain the most significant edge. Collected Company decks don't want to overboard because diluting your deck is a real risk. Spirits is a very focused deck so there is no reason to overboard unless you are fundamentally disadvantaged in a matchup.

I saw Kraul Harpooner in the sideboard of Kyle Henrikson, who made Top 4 in Grand Prix Phoenix. This is smart given that Spirits is the one of the few decks that can hang with combo. Expect to face it in the near future.

In an effort to fight Mono-Red I have included Lovestruck Beast in the sideboard. There are plenty of 1/1s to enable attacking so that's not much of a drawback. The 1/1 token it creates also helps against Mono-Black Aggro as it can be sacrificed to edict effects or trade with a 1-drop. A 5/5 blocker isn't so bad either when you're attacking in the air.

The combo decks are where Collected Company is diluted. Mystical Dispute is too powerful not to run a full playset. This is complemented by a Disdainful Stroke because it hits Inverter of Truth, Jace, Wielder of Mysteries, and Pore over the Pages.

Bant Company is one of my frontrunners for SCG Indianapolis. I wouldn't be surprised if something from Dimir Inverter and Lotus Breach gets banned before SCG Indianapolis given the stellar performance at PT: Phoenix. Inverter is the scarier deck because it's more resilient to hate. As the weekend went on in Phoenix I noticed the Lotus Breach deck had a worse win percentage which tells me it is less resilient.

Another option was a creation of R.I.W. teammate, Raja Sulaiman. He loves good stuff decks and has good results with his brews. He finished 8-2 in Pioneer at PT: Phoenix and was ultimately in the Top 16.

Here we have a deck with a lot of play, but can also beat down quickly. This is the way to combat the combo decks: Thoughtseize plus pressure.

You may notice a lot of unique spell names and this is because they have high diminishing returns. Scrapheap Scrounger is a resilient threat against decks with removal, but I don't want too many against aggressive decks. Glory-Bound Initiate is good in the opposite matchups, but there are no bad threats, only bad answers.

Thalia and Kunoros are good creatures on rate that complement History of Benalia as 3-drops. They both crew Heart of Kiran. Since they are both legendary I don't want to draw two as they have merit in different matchups. Kunoros lines up well against Underworld Breach and Uro, Titan of Nature's Wrath.

Raja has been working on this deck for over a month at this point. It sounded like a great deck and is even more well-positioned as Gideon of the Trials effortlessly stops Dimir Inverter. The planeswalker can crew Heart of Kiran and Gideon, Ally of Zendikar can also boost the emblem. Inverter typically plays a single Hero's Downfall and they need to kill two Gideons to win the game.

This deck plays 24 lands and is able to do plenty with the mana. The curve of the deck is low, but Mutavault, Thraben Inspector, Knight of the Ebon Legion, and Scrapheap Scrounger provide many options each turn. It's important to have a low curve with so many mana sinks because there wouldn't be time to activate your abilities when tapping out every turn.

Not only is Knight of the Ebon Legion a good mana sink that gets pumped by History of Benalia, but it also gets a +1+1 counter when a player loses four life at the end of your turn. This isn't difficult to accomplish with Heart of Kiran and your two different Gideons. In a pinch you can take two pain off Caves of Koilos or shock a Godless Shrine plus a Thoughtseize if the opponent didn't take damage. An Anguished Unmaking off of Caves of Koilos can work, too. Note it does not trigger on the opponent's turn.

Another great aspect of this deck is threat diversity. The core of the spells looks like Mono-Black Aggro which is vulnerable to creature removal. A mix of enchantments, planeswalkers, artifacts, and creatures creating threats makes interacting a challenge. This deck is filled with individually powerful cards that also happen to synergize.

Inverter is the deck to beat in Pioneer and I like to avoid that type of strategy. I would have to fight through unique hate from each deck and it seems unlikely I could beat all of it. There is about a one week window before the broader population picks up on actual ways to defeat the best deck and I will be too late. The mirror match will mean I need to skew my deck against the mirror as well as the rest of the metagame and that's not a good place to be.

Sultai Delirium is the most popular midrange deck. I think it will pick up steam given that it did very well on camera at PT Phoenix. It's also filled with fun Modern and Standard staples. I worry that I need to skew my deck for the mirror and opponents will be ready with haymakers to up the ante.

When Hogaak was popular in Modern I played Humans.

occupies a similar space because the metagame is currently warped and I want to be playing something unexpected. Playing this deck is like arbitraging the market because it has a proven track record in the warped metagame, but doesn't have the respect it deserves. I plan on playing the best deck for the current weekend and not the previous.

Pioneer is currently in a strange position where the best decks are much better than the rest. They are beatable, however. Time will tell if I play Bant Spirits or

. This is a scenario in which you can thrive by playing something unexpected and that's what I intend to do.