I'm back from Magic Fest: Indianapolis and I'm happy about my last minute pivot to Karn, the Great Creator in Tron. Sometimes Modern can deal you some weird sets of matchups; my record wasn't great, but the team still made a deep run for day two.

This is the first time my squad consisted of both Clay Spicklemire and Max McVety. It was a great time despite missing day two. We even got to stay at Clay's house five minutes from the convention center. Value.

Max played one of his trademark decks, Hardened Scales. There are only a few decks Max plays in Modern because he knows his range and sticks with it. For this event he could choose between Burn, Prowess, Scales, and Infect. Paper Modern tournaments typically feature more midrange decks and that's exactly what Max faced. I would play Scales if I expect to face a lot of Stoneforge Mystic and Tarmogoyf. 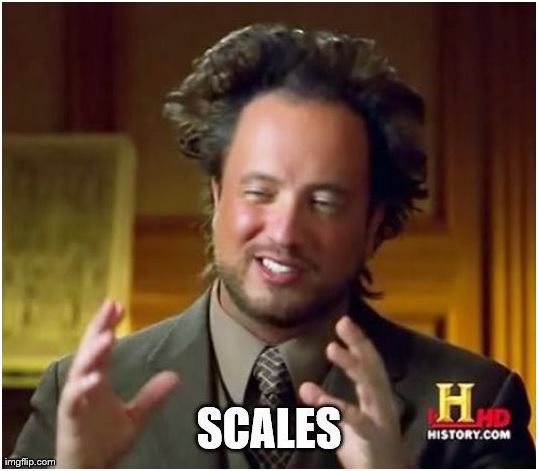 Max had a good record because he kept facing Stoneforge Mystic decks. The single Batterskull was not enough to stop the modularity of Arcbound Ravager. The swords are also quite weak due to the onslaught of colorless creatures to chump block.

Clay played Whurza. It appears to be the deck to beat according to the top players in the event. His individual record was also strong, but the mirror match can drag on for a long time. It's a deck that rewards dedication as you must be familiar with how every deck can win through lock pieces. It's not my kind of deck as there are too many decisions to make, but I will say that Urza, Lord High Artificer has increased the overall power level by a significant margin.

I spent some time learning the deck last weekend. It's important to understand the deck enough to innovate. Savvy opponents will know their matchup against Whurza and come up with a unique way to throw a wrench in your plans. Showing up with last week's technology is dangerous when your deck goes long.

Clay and Max both came into the event with the idea that Pithing Needle is well-positioned. It's no surprise that Whurza plays needle as it can be tutored with Whir of Invention to stop Oblivion Stone or Karn Liberated, but Max was finding it with Ancient Stirrings out of Scales. The Tron v. Scales matchup has shifted thanks to Karn, the Great Creator shutting down activated abilities. Needle costs a single mana which is a recipe for a fantastic Modern sideboard card. I lost what appeared to be a runaway game against Whurza by getting my Expedition Map needled on the first turn.

In addition to having fun playing Modern last Saturday we also got to play many games of Don't Mess with Cthulhu. 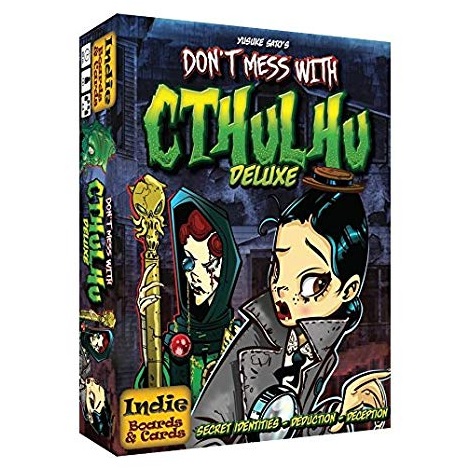 It's basically Werewolf or Mafia except there aren't any private conversations. This makes the game more about deduction and takes less time. The clues are cards in your hand so there's an element of randomness in choosing the right ones.

Max was making strange and suspicious plays as an investigator (good team) that suggested he had something to hide. Elenbogen was tilting off at Max for making such plays. It was a great time.

I like games simple on the surface, but have many layers of complexity. Magic is a complicated game and I don't have time to learn anything like it. It was my first time playing Cthulhu and was very fun.

The car ride down to Indianapolis was also fun: 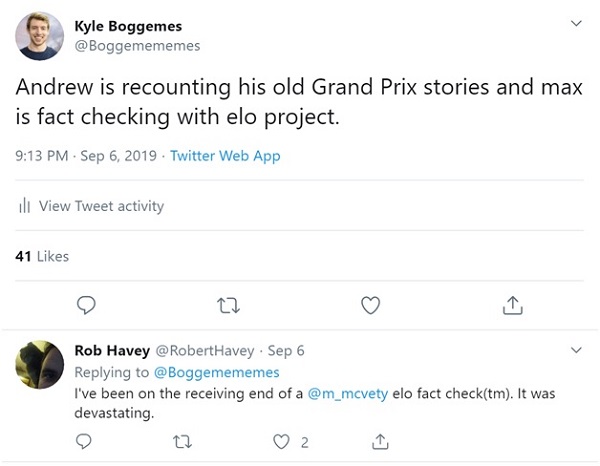 Rob Havey's response doesn't have to do with anything, but the use of "devastating" made everyone laugh.

The last thing to note is that there were absolutely no laws during the weekend:

Now that the scrapbooking is complete, here's the list I played:

I audibled from the traditional Tron list because I kept getting the suspicion that the most popular matchups in the room would be unfavorable without Karn, the Great Creator. Karn is fantastic against combo decks because he threatens to close the game in two turns.

Essentially all that happened was I cut three Walking Ballista and a Relic of Progenitus from the main to make room for four Karn, the Great Creators. This dramatically improved my matchup against Burn, Ad Nauseam, Tron, Whurza, Storm, Valakut, Twiddle Storm, Jund, Dredge, and you get the point.

After assessing this list championed by Andrew Elenbogen it was clear Karn was just a straight upgrade to the deck. Humans was the only matchup I wanted to board out Karn. I'm not entirely sure that it was ever correct to exclude, Karn, the Great Creator - even when Hogaak was legal. It's okay to be wrong; I can admit it. Karn is the truth. Play four copies.

There was a last second choice to cut the Trinisphere from the sideboard and that turned out to be the correct choice. It's similar to Sorcerer's Spyglass in that it's less versatile than Liquimetal Coating. The odds of needing to search for Trinisphere isn't high enough to warrant playing in the board for now. Nature's Claim, Dismember, and Veil of Summer are high impact and I want to make room for as many of them as possible.

I was talking with my friend, Max Magnuson, about the Twiddle Storm matchup against Tron. For a second I was feeling silly cutting the Trinisphere, but he reminded me the deck is full of effects that tap artifacts. If it's not even amazing against one of the Storm decks I want nothing to do with it.

The most noticeable drawback to playing Karn, the Great Creator was the lack of sideboard options. As I was playing the deck it was possible to pivot more than I initially expected:

These additional artifacts can be destroyed by your own Nature's Claim against Burn.

I also came across the cute interaction of Veil of Summer countering Gifts Ungiven when playing against Storm.

Ulamog wasn't great for me and might be better served as Emrakul, the Promised End. When the format contains many linear decks Emrakul is able to kill the opponent in one shot with their own effect. She is better now that there aren't many Relic of Progenitus making her more expensive.

Other than that topical switch of Eldrazi aliens the deck was great. Elenbogen lost three times over the weekend with the same list. Karn made sure I had a shot in any matchup.

A note here is I swapped Ulamog for Emrakul, the Promised End.

Blue/White Control (with or without Stoneforge Mystic):

Moving forward I'm going to stick with Tron. Karn, the Great Creator has reinvigorated my love for the archetype.

Once Upon a Time is clearly going to make waves in Tron in a couple of weeks. I'm not yet confident in what to cut or the amount to play. It may affect my flex slots such as Ugin, the Spirit Dragon that could be replaced with Walking Ballista. The important takeaway is to not play less Karn, the Great Creator even though it's not a creature.

Sylvan Scrying and Expedition Map offer a guaranteed Tron land. I've been burned many times searching for a Tron land with Ancient Stirrings; five cards isn't enough to consistently find the right card. Do not cut Sylvan Scrying or Expedition Map for Once Upon a Time. It might be correct to cut the 19th land for a copy- Sanctum of Ugin or Ghost Quarter. For now, I'm leaning toward playing less copies of Once Upon a Time.

I can see cutting the 41st spell, Thragtusk, for a copy to reduce the amount of Green cards in the deck. The Eldrazi alien spot can also be cut because Karn, the Great Creator searching for Mycosynth Lattice is another 10-drop.

I'll be looking to play this bad boy at SCG: Indianapolis on October 12. If the metagame appears too hostile to Tron I may switch it up and play Burn instead. It's a simple deck that I can play even when I'm exhausted. That's a big plus for a two day event.

The maindeck is stock. There aren't many places to switch it up; I have a split of fetch lands for Pithing Needle against Whurza.

Burn sideboards are where you gain the most edge. A pair of Searing Blood and Grim Lavamancer are for Humans and other tribal decks. If I'm looking to send burn spells at creatures Grim Lavamancer is a great way to gain traction.

Exquisite Firecraft is a great spell against Stoneforge Mystic and Batterskull. I can destroy a germ token with an uncounterable spell without needing to board in artifact hate. It's also been a good way to deal with Thought-Knot Seer.

Skullcrack has been overperforming. It's the best way to fight Wurmcoil Engine and Thragtusk out of Tron. It's also great in the mirror to counter Lightning Helix or turn off protection from Red against blocking Kor Firewalker.

I don't like Deflecting Palm in Burn. It's a reactionary spell and every deck with big creatures can stop it from being cast. Death's Shadow decks have discard and Stubborn Denial, Eldrazi has Thought-Knot Seer and Chalice of the Void, and the mirror has Skullcrack.

Path to Exile is medium, but gets the job done against Eldrazi and

Midrange decks. Since it doesn't deal damage I'm not interested in drawing too many copies. I can take down larger creatures with Exquisite Firecraft and Grim Lavamancer.

Kor Firewalker is currently being played in many Burn sideboards, but I prefer to avoid the narrow option. The odds of playing against Burn and drawing a Firewalker at a meaningful time is quite low. If Mono-Red Prowess picks up in popularity I could play a couple firewalkers.

I have liked Shattering Spree over Smash to Smithereens in the past, but there are fewer artifacts to destroy against Whirza. It's also important to race Tron. There are times where it's worth it to hold on killing the turn one Expedition Map to save it for Wurmcoil Engine.

Burn or Tron will be an excellent choice for any upcoming Modern event. Like Don't Mess with Cthulhu, these two Modern decks are simple to pick up, but difficult to Master.