If you've ever read one of my articles before, you know I build the deck before I write the article, then write the article around the deck I've built. I thought it'd be fun, however, to do something a little differently as the various commander writers on CSI and I take a look at all the Legendary creatures in Kaldheim. I am going to build the deck as I write, and let you get a peek into how I do this.

Looking through the various Legends available to us, one jumped out at me right away. 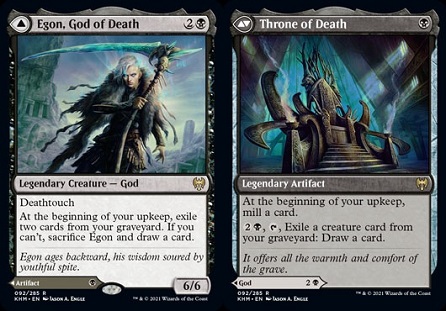 I love me a Mono-Black commander, and I especially love one when it makes me work for it. Aside from giggling at Deathtouch on a 6/6 (really? Okay...), a 6/6 for

is an insane deal. Additionally, we can cast it for a single

and get an artifact that lets us draw cards? Perfect. Let's look at two different ways to build to this guy.

Let's start with the more obvious and build to his front face.

A 6/6 for three is something I want to take advantage of. That means getting him out soon, attacking quickly, granting evasion, and winning with Commander damage. It's a bummer he doesn't have seven power, because then he would kill in three hits rather than four, but we can probably do something about that. If it weren't for his drawback, I'd want to load up on mana ramp and try to get him out turn two, but I think we're going to want to aim instead for a turn three commander, hitting on turn four, so we have a couple of turns to put some stuff in our graveyard.

Surveil will help us too. It allows us to have some say over what we draw if we have enough cards in our 'yard to keep Egon going, and lets us dump them if we don't.

Finally, we probably want a few ways to keep putting cards in our 'yard.

Is there a better card for this deck than Shard of Broken Glass? It mills the two cards we need automatically and gives our guy a power bump - just enough to put him at that magic 7-power!

Now we can fill out our deck with a few remaining pieces. We want to buff our commander up and punch him through, so we want a few pieces of Equipment, preferably ones that offer both of those things. Assuming 40 lands, we have 33 spaces left, so I think we can safely use 10 of them for these effects. We don't really need more than one, so with 10, we're likely to see at least one by the third or fourth turn.

With those selected, we have 23 slots left. Whenever possible, I like to run at least a few ways to reset the board. With an inexpensive Commander, value in having lots of stuff in the 'yard, and in a color that does it well, more than a few is probably worth it, so let's designate eight slots to board wipes. We could spend a fortune on Damnation ("It's the best!" you cry. "It's only 4 mana!" Yeah, that's true. But in Commander, frankly, I'd rather get more value out of my spell. Up till now, we have only four spells that cost more than 3 mana! We can afford to spend five or six [or even seven] mana on a board wipe), but we don't have to.

When it all shook out, we actually ended up with nine board wipes, but that's okay. It never hurts to have one in hand. That leaves us with 14 slots.

The vast majority of these slots should be put to point removal. We want solid removal, things that will make stuff really, really dead. Or at least we want it to be worth our while. The primary problem is if we have a Flying Egon and someone has a Dragon, or we have a Trampling Egon and someone has a 34/34 or something. We need to be able to kill it so we can attack and actually push our damage through. Dregs of Sorrow is almost always worth it for the card draw, but otherwise, we're going to look for effects that Exile or give -X/-X, to kill Indestructible creatures.

That leaves us two slots for some fun stuff. It might make sense to put in a couple of Gravedigger-style effects, or even straight-up Reanimation, but I'd rather go for more fun and stay on theme. My first thought was a couple of big Auras which, if they stick and we get to swing, will have a huge impact on the game. Eldrazi Conscription is great here, but it turns out Black isn't so good at that. Enslave, on the other hand, while not necessarily helping us by directly affecting Egon, is great. Rather than kill that 34/34, we can have it for ourselves! While we're at it, we can do some damage to its creator, and we can attack them without worry of a massive blocker! Seems good.

Since we're only in one color, we can also play some lands with abilities (Rogue's Passage, Sequestered Stash). Once we've filled that out, we've got ourselves a deck. Note the lands with Cycling are especially good here, because they can help to fill our 'yard. Also, we're running Snow-Covered Swamps, exclusively for Blood on the Snow.

This deck probably wants some more card draw (plenty of that to be had in Mono-Black) and could probably get it by dropping a couple of the mill cards and one or two of the Voltron pieces, but it's a good starting point. But now let's take a look at the other side of this card, and see if there's a deck to build around Throne of Death.

First thing we know is we can't win with Commander damage, at least not if we have no intention of casting Egon. So, we'll need another win condition. Second is we have very little control over what hits the bin, so we'll want to try to control that as best as possible - either we want stuff we can get back or we want stuff that wants to be in the graveyard. Third is we have built-in card draw... as long as we have enough creatures in our 'yard to exile.

Let's start with a win condition, because without one, most decks are fairly useless. I wonder (Living End) if there's a way (Rise of the Dark Realms) we can parley (Grimoire of the Dead) a graveyard-loving deck (Boneyard Parley) into a win (Liliana Vess)?

While Reanimating a large amount of creatures is one way, we could also work with a "you win the game" card like Liliana's Contract, Darksteel Reactor, or Revel in Riches. All three of them require some amount of support, but not a ton; if we run a few Proliferate cards we can run the Reactor, we need a few Demons for Liliana's Contract (and a way to make sure they can end up back on the 'field if they wind up in the bin), and we might be able to figure out a way to speed up Treasure production.

Looking at these two options, I think it makes more sense to go all-in on the combo route. The complication of getting enough creatures in graveyards, assuring we have a way to reanimate them all, getting enough mana, and making sure the right cards aren't in the graveyard (not to mention relying on our opponents both having creatures in their decks and that they're all dead) is really complicated. Do-able, but challenging enough to not be all that fun... unless you're into that kind of challenge, in which case, go for it.

Instead, I say we go for our three "win the game" win-cons. Rather than go for a full deck list, let's look at pockets of cards we'll need to support the combos. The rest can be up to you!

Everything needs ways to return these three cards from the graveyard should they wind up there. We are also going to have to run some tutors just to up the chances we can get one of our combo winners into our hand before they all wind up in the yard. Since both our ways to return (non-creature) cards to our hand are artifacts, a way to get those back wouldn't be bad either. So, start here:

The nice thing about the creature-tutors is we can get them back with other cards, plus Rune-Scarred Demon is a Demon for Liliana's Contract.

Let's start there. We need Demons. Let's look for some. We'll also want some ways to get creatures back from the 'yard, so let's have some of those, too.

Darksteel Reactor just wants to sit there, so a lot of winning is going to be based on how you play and your ability to survive. I'll leave the removal/survival package to you. But it's probably worth running these five cards, just to keep the clock ticking.

Finally, Revel in Riches wants Treasure. Since it makes it automatically whenever an opponent's stuff dies, again, it's going to come down to your removal package (Wrath effects are probably good here), but it will likely be worth adding some ways to get additional Treasure. Again, just keeping the pressure on.

Gold is the new Black:

If you run all the cards I suggested (keep in mind the Demons are all suggestions - run what you have) plus the three "win the game" cards and 40 lands, you have 20 slots for removal. Make sure you look at Flashback and other ways to cast from the graveyard, but you'll also be drawing cards, so it shouldn't be too hard to get the right mix.

I hope this trip down one-way-to-deck-build was interesting. Enjoy Kaldheim!