â.â.â.â That really, isn't much of a baseline baseline.

This is Fiery Confluence:

If you don't know Fiery Confluence, don't feel too bad. It's a card from Commander 2015, which was, as the name implies, a Commander product.

Fiery Confluence was never intended for the typical competitive formats. It was never at any point -- not even in 2015 -- legal for Standard. The reason tournament Spikes like Yours Truly even know what this card does is that it helped win a Legacy Grand Prix a couple of weeks ago.

My Top Level Podcast partner, Hall of Famer and PT Champion Patrick Chapin, understandably asked out loud what kind of damage this card could do in Modernâ.â.â.â

Which is to say that, sometimes, these non-Standard sets can get a little nutty on the flexibility. Fiery Confluence isn't the best Shatterstorm. It costs the same as Shatterstorm but can "only" destroy three artifacts. Put another way, it's a Shattering Spree for threeâ.â.â.â for one more.

And also a mish-mosh type. One to this, two to that, smash that artifact.

Like Commander 2015, Battlebond is a not-Standard new set. Don't be surprised if it gets a little nutty on flexibility.

Back in 1996, Australian Tom Champheng took down Worlds with this version of White Weenie:

The most unusual card in Champheng's deck is Sleight of Mind. He played one in the main deck and one in the sideboard. Sleight of Mind was unusual because he couldn't cast it! Tom meant to register Adarkar Wastes, but had four extra copies of basic Plains instead. Doh!

Sleight of Mind should have allowed Tom to change the allegiance of his White Knight or Order of the White Shield to match his opponent's colors. As it was, he had to settle for Black-hating 2-dropsâ.â.â.â And the occasional dead draw.

The title of this segment, though, is about tournament-playable three-drops!

While Sleight of Mind was unusual in this deck, the eventual champion's choice of three is probably a head scratcher in its own right. I mean, what mother could learn to love Phyrexian War Beast?

Remember: Tom's was a White creature deck. Small White creatures set the bar for some of the best and most efficient options even twenty-two years ago. His Savannah Lions were just as offensively lopsided then as they and their descendants are now. And who would raise an eyebrow at any of those 2-drops?

Yetâ.â.â.â There was this weird, impending time bomb, of a three.

Phyrexian War Beast was a three-four creature for 3 mana (with multiple drawbacks).

Our eyes -- a dozen years after this fact -- see a card substantially weaker than, say, Thrashing Brontodon. The Dinosaur has the best of both these worlds; the War Beast's size and the Spirit's lack of bad qualities.

To be fair, both cards were contextually driven. Phyrexian War Beast -- unlike the actual White creatures in Champheng's White Weenie deck -- could block a Black Knight.

Gnarled Mass, a vanilla 3/3, could tussle with and even dominate an opponent's small White creatures. Paul Rietzl, future White Weenie PT Champion -- famously played 2/2 creatures at every casting cost one (Isamaru, Hound of Konda) through four (Hokori, Dust Drinker). A 3/3 at three was bigger than any such 2/2, and could at least trade with a 2-drop Samurai.

It may seem odd to set our baseline with such disparate 3-drops.

Brightling is not even from a tournament-intended Spike set!

But if the past can be prelude, it may be instructive to set the table by showing how far the 3-drop has come. Champheng won the World Championship with Phyrexian War Beast! Gnarled Mass was as boring as can be!

What then might be the destiny of A 3-drop White Morphling?

Did somebody say "Morphling"?

The Greatest Creature of All Time, 1998

Morphling did it all!

Debuting in the powerhouse of Urza's Saga, the 3/3 for five mana was a wonder in a dizzying variety of decks.

A peerless racer, Morphling combined evasion and conditional offense. It could strike for five in the air like a Thundermaw Hellkite.

Winking at Serra Angel's past, Morphling could untap and play defense, returning to defend with a kind of pseudo-vigilance.

With two different kinds of self-preservation built-in, Morphling could increase its toughness or ignore point removal. Either, or, whatever.

Oddest of all, maybe, Morphling could kill itself by reducing its own toughness to 0. While this might not seem like something you would want to do when you were the controller of The Greatest Creature of All Time, it might be exactly what you wanted to do if you had an Oath of Druids in play and a Gaea's Blessing somewhere in your library.

Green decks loved Morphling. It combined sometimes with Opposition and other times with Survival of the Fittest. As we already said, it was a favorite of Oath of Druids decks as an elegant, resilient, and reliable finisher.

Blue decks loved Morphling more! Draw-Go loved nothing more than laying Island after Island, building advantages, and then closing out an already-won game in four quick Morphling swings. Morphling and a wall of Counterspells, that is. "Accelerated" Blue decks loved Morphling even more! Or at least they acted like they did, adding Grim Monolith for no other reason than to be able to play Morphling a turn or two early. Though these decks played fewer Counterspells, they could win faster by, you know, starting out with Morphling in play three turns early.

Morphling was 1998's physical manifestation of the inevitable. Given sufficient mana, this card was death. It would fly over your team, untap to defend, laugh off your removal, and win every combat. It was the perfect control finisher! You could compact so many different functions into a single card -- kind of like a Fiery Confluence now that I think of it -- leaving room for more counterspells, card draw, and lands.

Morphling ceased to be the Greatest Creature of All Time when Psychatog took its place as the premier Control finisher. But it never ceased to be a favorite in the hearts of Planeswalkers. WotC R&D has played on the Shapeshifter's popularity more than once. Torchling, Thornling, and Aetherling have all achieved some successâ.â.â.âBut none reached the pinnacle of the original.

Then again, none of them ever cost three mana.

The Many Faces of Brightling 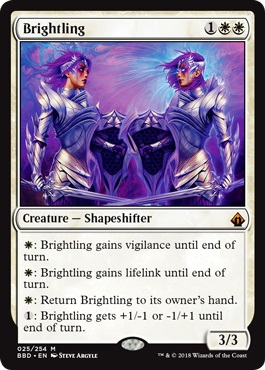 You'll have to understand that when intrepid editor Robert Burrows offered the Brightling preview to me, I had no idea Battlebond was a casual set.

The wheels didn't just turn on this oneâ.â.â.â They whirled, whizzed, and exploded completely off the rails.

My initial mental assessments on Brightling went everywhere from "is this the greatest Control finisher of all time" to "I'm not sure this is Constructed playable" on the range. Which is why I went back and looked at historical performances. My guess is that if this were indeed a Standard-issued card, Brightling would fall closer to the former than the latterâ.â.â.â But the truth is, like so many things, probably somewhere in the middle.

Brightling on Three: The Weissman Gambit

At three mana, Brightling is simply a 3/3 creature for two specific mana and one other. It's certainly harder to cast than Phyrexian War Beast, almost exactly the White Gnarled Mass.

â.â.â.â Not that that kind of thing has ever happened before.

On the turn you tap out for Brightling, it's basically a vanilla 3/3. Unlike the six snarky examples directly above, it's no worse than Gnarled Mass. But it's not actually Gnarled Mass.

Sure, you might have some purpose for tapping out for Brightling. Maybe you're about to die and you're desperate for a body. Maybe it's late and you're screwed for mana. But maybe it's also strategy.

This is the first face of Brightling; the so-called Weissman gambit.

â.â.â.â Anywhere but The Red Zone next turn, that is!

Tapping out for Brightling, assuming you later untap with Brightling, represents a vital mana savings. Maybe you will then have, effectively, a six- or even seven-mana Brightling on your hands the next turn!

Brightling on Four: The Classic PatrickJ

Back in the late 1990s and early 2000s, turn two Grim Monolith was Morphling's best friend. It was considered worth the investment in the artifact -- which might or might not ever untap later in the game -- just to get Morphling onto the battlefield with

open the next turn.

open, Morphling could fall back onto one of its defensive abilities, living through most point removal spells.

Just playing Brightling with four mana on the battlefield is like investing in that Grim Monolith first. You get your 3/3 in playâ.â.â.â But have one mana open for any of its abilities.

Soul reading the opponent for an Abrade? -1/+1 will give it the fourth toughness necessarily to live through three points of Red removal.

How about a more serious death sentence? Because Brightling can bounce back to your hand, it is even more resistant to removal than Morphling was! Re-casting Brightling after, say, a dodged Cast Out might be more annoying than just giving it shroud, say; but Morphling could never dodge a Wrath of God. There will be times when trading 3-4 mana for a little time will cost you a gameâ.â.â.â But more often, actual cardboard for just a couple of mana taps is a trade that you will sign up for all day.

This says nothing about more desperate versions of the four land Brightling. Need to trade with a four-toughness creature? Brightling will do that. Ready to go to Valhallaâ.â.â.â But not until you've activated lifelink? This card can be an absolute life saver. And life gainer! We're all imagining what Brightling can do unfettered. So losing yours prematurely, even "profitably" would probably suck. But painful as they might be, these options are far more attractive than shuffling up for the next game.

Brightling on Lots: The Greatest Control Finisher of All Time (maybe)

You've probably already come up with some kind of wild idea about what you can and would do with a Brightling given no limit to available mana. So there is no point in arguing any such points. Yes, you can smash for five, gain five, and still be tightly coiled for defense.

Seeing that you are probably a Control mage, you can take your pickâ.â.â.â Anger of the Gods style? Pump that toughness. Akroma's Vengeance style? Return Brightling to hand first, before re-playing with a ton of open mana. Because, hey, it's Magical Christmas Land and we have "lots" of mana.

Surely this is the greatest control finisher of all time!

Not to rain on our own parade to finish, but there are a couple of things that Brightling can't do that might be worth noting before we sign off.

And again, a special thanks to Wizards of the Coast for giving us this preview content!