Standard is, if you can believe it, even more diverse a format than you probably already think!

For some weeks prior to the Streets of New Capenna Set Championship, there was chatter about Ob Nixilis, the Adversary being too powerful. Yet we saw not a single copy in the Top 8. For a second there, I was afraid that we might see a weird, lopsided, Standard where Cleansing Wildfire brought a kind of anti-Growth Spiral ban. Two of my favorite streamers posted impressive performances in the same week! And then Hall of Famer Kenji Tsumura came to the Set Championship with an Izzet land destruction deck topping up on Arcane Bombardment.

An immediate impact of the Set Championship was that I personally incinerated between four and five thousand gems trying out the new decks. What had I gotten so wrong? My beloved Ob Anvil - which I had declared to be the best deck in Standard - made not a splash in Top 8.

Conversely, I had a hard time winning consistently with any of the new decks, even Grixis Vampires, which seems generally structurally sound. I am at this point really second guessing crafting the three Arcane Bombardments in Kenji's deck. I don't think I've ever won a game with it. Not one!

There are some reasons for this in a still-evolving Standard metagame that actually shake out. But if I were playing for my life, my full recommendation is still with Ob Anvil. Down to "chip and a chair" level of gems, this was my first foray back with it: 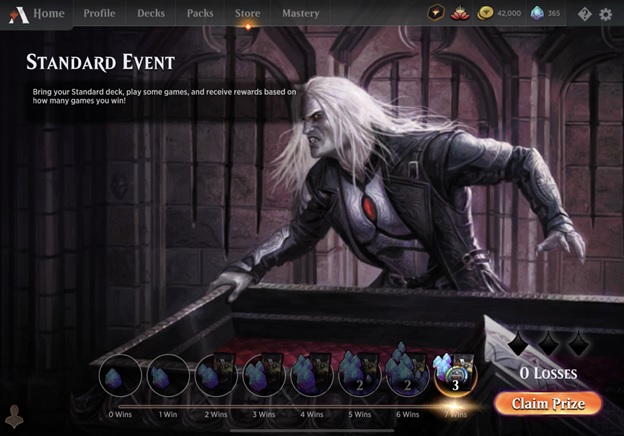 And - knock on wood - it has not yet left me with fewer than five wins.

But this article isn't about Ob Anvil!

There is a new hotness in the format that didn't make Top 8 of the Set Championship, either; but you really have to know if you're going to compete in Standard right now. While it hasn't been as consistent as Rakdos for me, I've generally won more than I lost so far, and have at least obtained a Play-in Point.

The deck is Boros Haste.

This is the version I've been playing with:

A lot of the decks floating around right now play Furycalm Snarl where I have chosen to go with Sundown Pass. Snarls in general have fallen out of favor for a reason. Here they reinforce one of the worst aspects of the deck, and ask you to double and triple down on basic lands. As you can see, I still have "more than one" basic but have room for Eiganjo and Sokenzan for some spell-like spice.

The best thing about this deck is that if you get a curve draw, especially on the play, your likelihood of winning is quite lopsided. The strategy is as sound as it is deceptively simple: Efficient offensive creatures, many of them with haste, plus burn cards; end.

Most of the rest of the cards in this deck see play elsewhere, but Sunrise Cavalier is a weirdo. If you were great at Innistrad: Midnight Hunt Limited, you might never have seen this card despite it being an uncommon, as it is not Blue, Red, or Green. So, you might not have noticed it has trample!

Haste and trample make for quite the little Gnarled Mass here; and, anything into Sunrise Cavalier into Thundering Raiju essentially exemplifies this deck's lopsided level of expectation. So many of the cards make +1/+1 counters... Everything but Brutal Cathar // Moonrage Brute can put a +1/+1 counter on something, which in addition to being effective in isolation, makes Thundering Raiju that much better.

These are the worst cards in the deck:

Valorous Stance is just a weirdo. It's a one-of. I'm usually all for one-ofs that can rock the boat, but this one is the only spell in the deck that can't deal damage.

I get why Brutal Cathar is played in this deck. It's technically a creature, so can get the benefit of Kumano Faces Kakkazan's Chapter Two. It can tempo away a large blocker. I'd go so far as to say it's better in Boros than it generally is in regular White Weenie (or Selesnya Midrange decks) because of its ability to promote the rest of the deck's momentum on offense.

But it's also terrible when you're playing against control. It can smell like a godsend against a Hinata, Dawn-Crowned... But you just know it's biting it to Flame-Blessed Bolt mid-combat.

You know what a good game for Boros Haste looks like. But what about a bad one? In my experience, there are two broad kinds of games where you're highly unlikely to win. Well three if you count "the mirror, only you went second" but let's put that to the side.

First is a matchup where it's about value and trading, and the opponent can kind of force you to play their game. Outside of the one Valorous Stance, you don't have a lot of interplay in those kinds of games. Play With Fire is particularly ineffective against Raffine, Scheming Seer; and you can become buried quickly by games where the opponent is operating multiple Planeswalkers.

Boros is really only good at one thing. The trample on Sunrise Cavalier gives it an additional dimension, but anyone good at interrupting its offense has already won an important battle. Every point removal card, every successful Jwari Disruption // Jwari Ruins, that sets the opponent up to play a trading a grinding strategy is actively challenging for Boros.

The worst thing about the deck - and this is a widely applicable fault - is how bad the mana can be. You can hit your land drops but be all one color, for instance. Most multicolored decks in Standard have better mana than Boros. So, you can often find yourself playing from a position of uncertainty. I know that I've kept a larger number of "speculative" hands - hands with potential, but where I need to draw something particular relatively soon - more than with other decks. Boros hands can be seductive. You have a Kumano Faces Kakkazan // Etching of Kumano and lands. You can technically Roil Eruption turn two if you want to... Not the best use of either card, but at least you can tap your mana.

How much better does that hand get if you can guarantee a Plains for the Luminarch Aspirant in your hand? Or at least a Bloodthirsty Adversary that you can deploy as a 3/3? Winning with this strategy often means getting comfortable with uncertainty. Keeping hands that are most of the way there but not all the way. Planning your next move with the faith that you're going to draw the proper card to make that play before it's in your grip.

Chose to play 1 basic land since I felt land destruction wasn't a functional strategy. Lost to LD round 1. 0-1 #SNCChamps

One thing the otherwise inconsistent mana base does is provide a lot of basic lands. This is the kind of deck that a Cleansing Wildfire control pile never wants to face. Since the Set Championship lots of players have shifted to playing more basic lands, but few can punch the opponent in the face while they are kind of stuck cantrip-ing with Cleansing Wildfire quite like Boros. If I were doing a SWOT analysis of the deck, I'd chalk this up to an "Opportunity" ... Some opponents have built their decks and devoted slots in a way that this one is essentially immune to; their very existence in the metagame leaks value toward your strategy.

Boros, broadly speaking, offers a lot of incentive in Standard. A Mill deck would probably rather face straight Mono-White than Boros! Even in a spot where it's likely to have to play attrition, or where the opponent might go over the top, Boros presents efficient offensive creatures and finishing burn.

In this end, that's its biggest pull: There aren't a lot of decks right now that can win the game completely non-interactively, despite presenting a fair, interactive, game up until that point. Roil Eruption, Play With Fire, and of course Bloodthirsty Adversary provide reach. But don't sleep on Thundering Raiju! Any Raiju can offer a little bit of reach, but multiple ones attacking together can often kill the opponent before they declare a block. Whenever possible, spread out +1/+1 counters to help maximize the Raiju's Thunder.