I'm always up for finding new ways to play Magic. Duels of the Planeswalkers has allowed people to play wherever a Wi-Fi location can be had, but playing at work has felt like an unsustainable model for a variety of reasonsâsuch as the high cost of the game and children. Beyond the geek shame of being âthat wizardâ or being unable to find another Magic player at your nylons-and-pocket-square corporation, it's quite hard to bring in a leisure activity into a workplace.

I've never heard of âlunchroomâ as a term for playing, but apparently, that's a thing for high schoolers. I found many examples of lunch-playing as early Magic examples but very few for adults. Our own editor Adam Styborski wrote on Winchester Draft for if you only have two players at your company who play Magic. If you haven't tried the format with a Cube, you haven't lived. It's awesome. I've only played over lunch at a gaming company where I used to work. I knew I needed some new, fresh information on this. Luckily, my next-door neighbor poked me with a stick about playing Magic at his workplace. He told me to come in and we'd shuffle up some Commander.

I was a bit apprehensive, knowing that he works at The Nerdery, a web development firm in a Minneapolis suburb known for its geekiness. The geek shame there is quite low, and I don't hang my flag that high to be honestâdespite my Melira alter saying swag otherwise. Not sure I'd have the brass balls to contact a local game store and bring in judges to host prerelease parties at a corporate office. It's serious business, you guys. It's the only place I've seen where you can play Magic and pet dogs at the same time. Magical, I tell you. 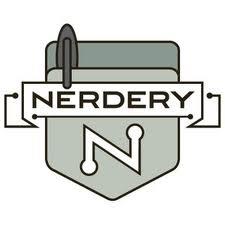 From their experiences, they informed me so I could write this article. If youâre a web developer and donât want to work on fixing MTGO and having it ported to Mac OS XâahemâIâd look into working thereâ.â.â.âseriously. Serious hat tips to them.

This is a list of why your company should encourage you to play Magic:

Hiring people is an awful chore. Despite the unemployment rate slowly dropping, thereâs a ridiculous amount of underqualified people applyingâ.â.â.âand the worst part? Qualified people can easily become lost in the shuffle. Even after doing objectiveâand a great deal of subjectiveâchecks to make sure someone isnât a serial killer, the person could just have a great faÃ§ade and be crazy-lazy at the job.

Referrals are pushed because saving money is good, and HR tends to be always overworked. Itâs the reason you receive a kickback bonus for referring someone. Having an employeeâs explicit thumbs up basically skips a full round of interviews to weed out the crazy. I mentor a lot of University of Minnesota students, and I actively tell them that they need referrals for all job applications they submit.

We had Magic Drafts at my old work, and bringing in outside people introduced people to the company's brand. With our current job market incentivizing us to switch positions (work thirty years and receive a gold watch? Homie, that ship sailed), retaining employees and having their friends and colleagues join lowers turnover, which helps the bottom lineâjust saying. 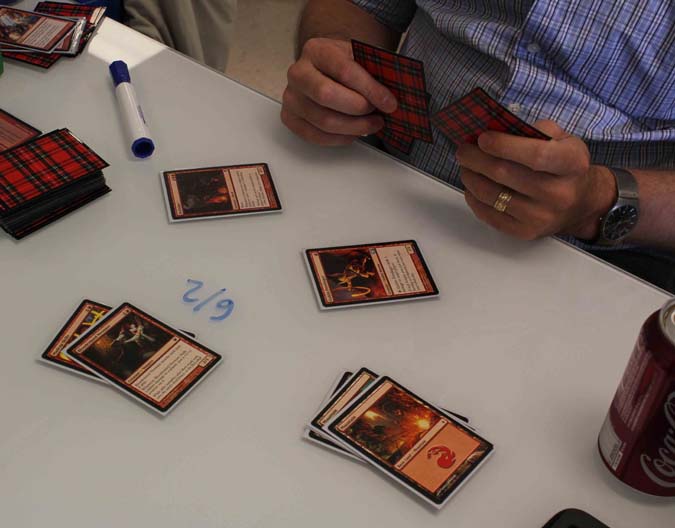 Itâs a heckuva lot easier to pick up on Magic and get back in when you can see tokens and counters by writing on the table.

2. Being rated as a best place to work is incredibly important to company morale, retainment, and recruiting.

Aside from the personal plug for The Nerdery, if people know that you have a good place to work, Magic included, others will want to join you. 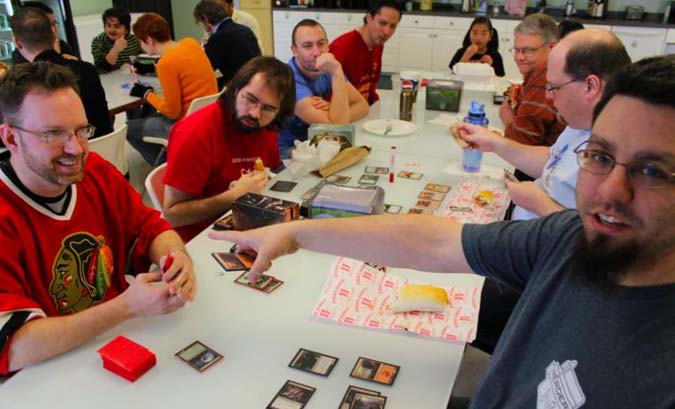 A typical lunch at The Nerdery

You only have to change the organizational mindset around playing games at work by exploring the multitude of benefits, value, and additive nature it creates for the organization. Playing games at work acts as the catalyst for free morale. You canât create workplace culture, but you can shape it. This means you need people who want to play Magic and other games already. The proliferation of geek-chic games such as Killer Bunnies, Settlers of Catan, or Pandemic in social circles allows for an addition of a happy hour on site by bringing in adult beverages and playing board games. It's a minor addition and fosters people's interests.

How The Nerdery added Magic was organic. Some people started playing over lunch, and then more added, and eventually, a league was started. From there, players asked management if they could have events afterhours, such as prereleases. Things were quickly approved, and a desire was met. That's nimble management and does wonders for morale.

Turns out when a company encourages people to do their hobbies and have fun, people like to work there. Shocker.

For a mere forty-five-to-sixty-minute game of decisions, the big things in lifeâtaxes, work struggles, and issues at homeâtend to dissolve away because the game forces you to focus. I never hear my text messages during a Magic tournament, much to my wife's annoyance, but it was the same way with track and field. I didn't hear anyone during a race either. It was all kind of a blur.

Despite obesity being battling with stress as a present-day, first-world problem, companies have to fight both of these issues to reduce company insurance plan health costs. Working for the weekend matters a lot less when you have friends willing to play a game every day at lunch. It's only four hours until something funâinstead of four days. I'm sure our resident psychology of gaming researcher Natasha will have something on Magic's stress-reducing elements in the foreseeable future. 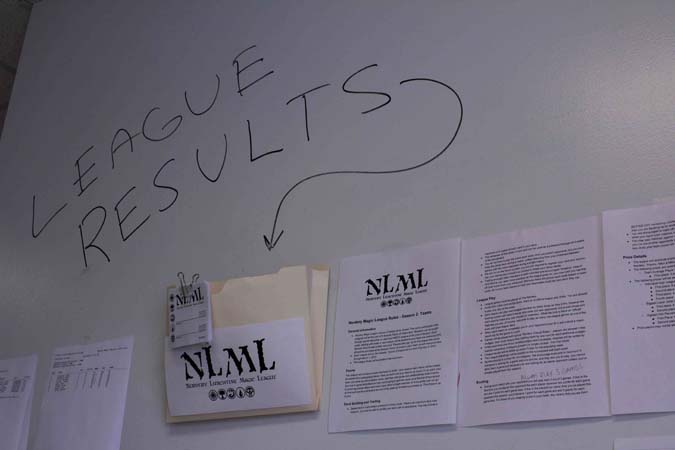 4. Increase productivity by lowering the addiction.

Playing Magic at lunch is the nicotine gum for your Magic addiction. We all know that Magic's subreddit, the #MTG Twitter hash tag, decklists, and articles of all varieties are always open tabs. If you have that itch to do Magic, playing lowers the amount of it you need to consume. Will you still keep a tab open? You probably will, but it won't be as rampant when you know you'll be playing.

If you don't have a bunch of people to play with, have your work Magic buddy set aside a calendar event to do it up. Others will be able to see it, and if someone sees, âMike, Frank, Jim, Karen, MTG Draft,â that person'll know the lingo. 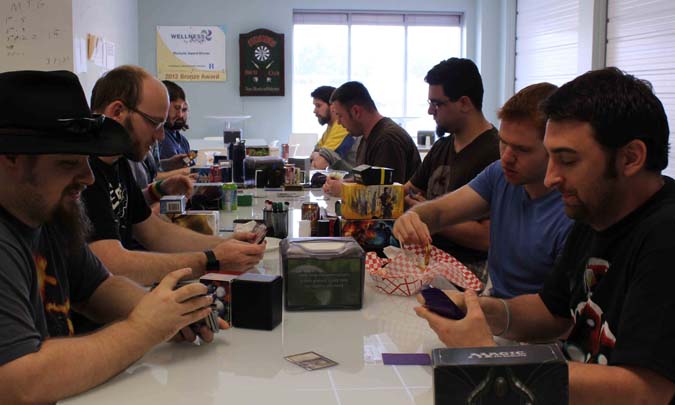 Work + Play = Jack not being a dull boy

Don't mention to HR that you're reading Magic articles during work, but comparing a slightly longer lunch break with colleagues compared to shopping for shoes or power tools will earn their attention and quick approval.

Creating bonds between team members is great. (Yay for trust falls!) Creating bonds with a structure that lowers the awkward factor is even better. Getting to know people outside your department is best. It creates a community from withinâinstead of recruiting people into the company. That's in addition to the obvious morale boost and the investment employees will have for other department and employees. âI hope Roy's accounting department gets their work done early and efficiently so we can play Magic,â moves to, âI hope accounting does well in my company.â Finding ways to build bridges is very, very beneficial to the company and is normally crazy-expensive. This is like resort-retreat expensive with catered-food-and-expense-reports-for-mileage expensive. Culture investment is expensive. Even the party-planning committee costs a ton of money. 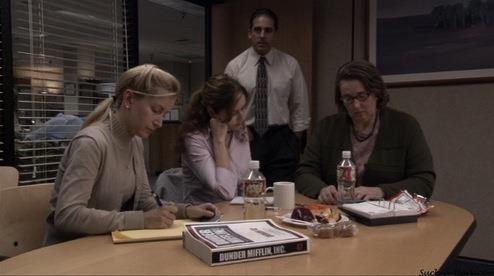 Creating additional social structures helps a lot when a colleague next to you just won't stop talking about how great being a vegan is or about the moon-landing hoax. Vent with the marketing person if you're in HR or check into the HR policy on company dating. I'm just saying that meeting more company folk is usually a good thing.

I plan to play Magic at work as much as my company will let me. Finding that secret wizard in another department will be an awesome day to keep my skills fresh. I barely remember the upkeep during Commander because it's rarely used in my playgroup. My friend Eric has mentioned how he lets folks know that he plays. âI keep a few oversized cards on my desk, so in case anyone walks by, batsignal-like.â Wearing a pin of your favorite guild on your bag will also bring people to noticeâI guarantee it. Thatâs an 8:00 A.M. invitation for a next-day game over lunchâI guarantee it.

Even Brady Dommermuth kept playing Magic because of his lunch hour, as explained by Doug Beyer on Getting a Job at Wizards. If he hadn't, maybe we wouldn't have had guilds, which were something he worked out. I'm just saying: Playing at work pays more dividends than it shows at face value. If your choice is to not play, find a way, and I encourage you to do so over your lunch hour. If nothing else, talk to HR, and see if they would cater an evening Draft as a teambuilding activity. I hear Jimmy John's is pretty quick to deliver.