Previews for Fate Reforged are upon us, and one potential deck stuck out to me almost immediately. Warrior tribal was never much more than a draft archetype in Khans of Tarkir, but this new set adds several amazing new tools for the deck that might be enough to push it into Standard. As a deck thatâs not currently on the radar, it will probably be a great option for those on a budget. Hereâs the list I put together.

Pulse Tracker was a strong 1-drop for the Vampire deck in Zendikar-era Standard, and Mardu Shadowspear is even better, thanks to the addition of dash. Although the ability wonât come into play often, it can occasionally help you deal those last few points of damage when you draw a Shadowspear later in the game.

Another new Warrior that caught my eye was Battle Brawler. Although itâs just a vanilla 2/2 by itself, it becomes a 3/2 with first strike when you have a white permanent on the battlefield, making it a great deal for 2 mana. Although this deck is mostly black, it has enough white permanents that the Brawler should be beefed up most of the time.

Mardu Strike Leader was the main reason I wanted to make this deck. Not only is it a Warrior, it also gives you another Warrior every time it attacks. Making 3 power for 3 mana is pretty standard, but Mardu Strike Leader also gives you a 2/1 every time it attacks. Thatâs even better than Brimaz, King of Oreskos, although the Leaderâs 2 toughness will probably hold it back on occasion.

To help solve that problem, Iâve included Chief of the Scale. Although usually shunned in favor of Chief of the Edge, I included it here for two reasons. First, itâs another white permanent for Battle Brawler. More importantly, it allows the deckâs plethora of 2-toughness creatures to attack into a Courser of Kruphix without fear. It also prevents the 1-toughness creatures from being taken out by tokens from Hordeling Outburst or Elspeth, Sun's Champion.

Of course, Chief of the Edge makes an appearance here as well, boosting the power of your Warriors while making for a pretty good attacker itself. With Chief of the edge in your opening hand, you can take out around half of your opponentâs life total by turn three.

Bloodsoaked Champion is by far the best 1-drop for this deck, thanks to its ability to return from the graveyard pretty much whenever you want. Along with Tormented Hero, it attacks for 2 damage, dropping your opponentâs life total before he has a chance to do much about it.

Brutal Hordechief is basically a Hellrider in disguise. Although it doesnât have haste, it does add some free life-gain onto its ability, making it even easier to win races. It also has a second ability that allows you to win games in which you wouldnât otherwise stand a chance. For 5 mana, you can force all your opponentâs creatures to block your smallest threat, letting the rest sail right past to end the game.

Suspension Field gets rid of basically any creature you care about, and it does so for just 2 mana. It also gives you another white permanent to make sure you can use Battle Brawler to its full potential. The 3-toughness mark just so happens to be the point at which a creature can survive combat with many of your creatures, so Suspension Field is perfectly positioned to deal with any blocker that can cause you problems.

Although it costs 1 more mana, Hero's Downfall allows you to dispatch a creature at instant speed. More importantly, it allows you to take out Planeswalkers without using valuable attack power. 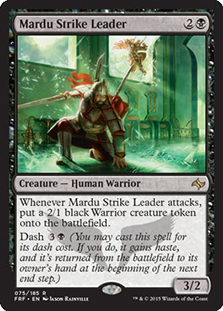 I won the roll and led with a Tormented Hero. My opponent played Temple of Deceit and passed the turn.

I cast Chief of the Edge and swung in for 3, and he played a land and passed.

I moved to attack, and my opponent killed Chief of the Edge with Bile Blight. I got in 2 damage and cast Battle Brawler. My opponent played a Temple and passed the turn.

I attacked for 4 and then cast Mardu Strike Leader.

My opponent cast Perilous Vault, and I attacked with everything to drop him to 4.

He played a land before ending his turn, and he activated the Vault when I attacked again. I cast another Mardu Strike Leader and passed the turn.

I used dash to bring out a Mardu Shadowspear. My opponent killed the Strike Leader with Bile Blight, and I attacked for 2. My opponent played a fetch land and activated it. He exiled his graveyard to cast Dig Through Time and ended his turn.

I cast Mardu Shadowspear with dash, but he countered it with Dissolve. I passed the turn. My opponent cast Interpret the Signs, drawing four cards.

With my opponent at 1 life, I cast Tormented Hero and targeted it with Hero's Downfall to trigger heroic and win the game.

My opponent led with a Temple, and I cast Mardu Shadowspear.

He played another Temple, and I attacked for 2. I cast Battle Brawler and ended my turn.

He played a third Temple, and I attacked for 4. I cast Bloodsoaked Champion and passed the turn.

My opponent cast Perilous Vault, and I cast Chief of the Edge. I dropped him to 4 and passed the turn.

He played a land and passed. I moved to combat, and he activated the Vault. I cast Tormented Hero and Chief of the Edge and then passed the turn.

My opponent played a land and passed. I cast Brutal Hordechief, and my opponent killed Chief of the Edge with Hero's Downfall. I attacked to drop my opponent to 1.

He drew for his turn and conceded.

This deck certainly has a lot of attack power, and as we saw here, it can actually fight through removal and board wipes pretty well. Iâm a bit more worried about how it fares against Siege Rhino decks, but in early testing, it seemed that the matchup might still be slightly favorable. Brutal Hordechief probably has a lot to do with thatâactivating its second ability almost always means you win the game.

With decks moving further and further toward controlling the late game in order to fight the glut of midrange decks in the format, an aggressive deck like this one could be the perfect choice to take your local Friday Night Magic by surprise.