Itâs award nomination season, and the finalists for the Chesley Awards, awarded by the Association of Science Fiction and Fantasy Artists or ASFA, were just announced. ASFA is a nonprofit where dues-paying members have built a supportive community to do everything from running forums and charity auctions to technical assistance for its members.

From its website, hereâs an explanation of why the awards are named Chesley:

"Each year ASFA gives out the Chesley Awards, which are named for the great astronomical artist, Chesley Bonestell. The Chesleys were started in 1985 as a means for the SF and Fantasy art community to recognize individual works and achievements not otherwise recognized by the Hugo Awards, during the previous year."

The group is nonprofit and the award is meant to fill the gap left by the Hugo awards, which donât include all the art categories. For $35 a year, you can become a member and vote for your favorite.

Below, Iâve included all the categories and nominations. Iâve marked the category where Magic illustrations are located by putting it in bold.

Tyler Jacobson, Beyond the Pool of Stars by Howard Andrew Jones (Tor, October 2015)

Donato Giancola, Beron and Luthien in the Court of Thingal and Melian, Oil

Jeremy Jarvis, Wizards of the Coast

The winner of each category will be announced at MidAmeriCon II in Kansas City, August 17-21, 2016. The Hugo awards are also announced there.

Are there quite a few names there you recognize? Youâll notice a few things about art awards for science fiction/fantasy or imaginative realism. The community is small. For trading card games, those with truly exceptional art are Magic and occasionally other brands will see some greatness every now and then. Donato is always nominated because heâs incredible, and it is incredibly difficult for new artists to break onto the scene. Being socially accepted can coincide with awards if someone is accepted enough to be nominated while making stellar works on top of that.

Art awards are the difference between painting novel covers for years, a reputation of quality, and having to constantly reprove yourself as an artist. Getting paid better rates and more leverage to negotiate also come with that territory.

This is the first time Magic has swept the entire category. They had all but one nomination in 2014 and that single outside artwork won the category. Last year, Pharika, God of Affliction by Pete Mohrbacher won the category. Distress by Michael C. Hayes won in 2012, Stoic Angel by Volkan Baga won in 2009, Blazing Archon by Gabor Szikszai & Zoltan Boros won in 2006, and Shivan Dragon by Donato Giancola won in 2002.

A quick note: not single one of the 2016 Magic card art nominations are mythic rare or rare cards. One is even a reprinted card and all pieces are digitally created. Letâs examine each piece of Magic art that made it in. 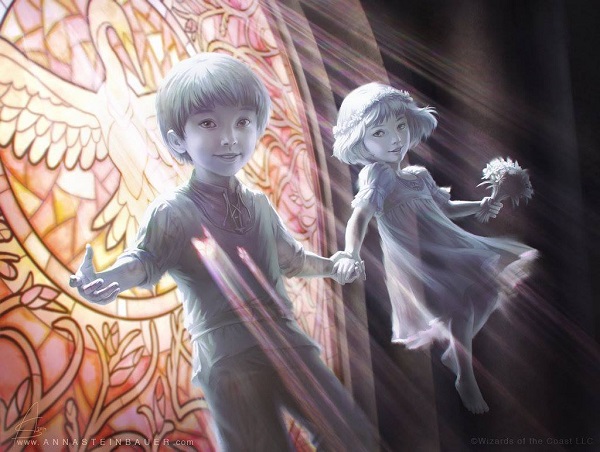 I wrote about this in More Art Controversy and the link is mildly NSFW. The piece is haunting, and the meaning changes as your experiences change throughout life. Itâs a broadening of Magicâs brand to show highly digital children ghosts. There is nothing morbid about them, yet, as a marquee brand, what is brand-appropriate shifts over time. I think itâs lovely and makes you ponder they're saint-like appearance.

Fruit of the First Tree 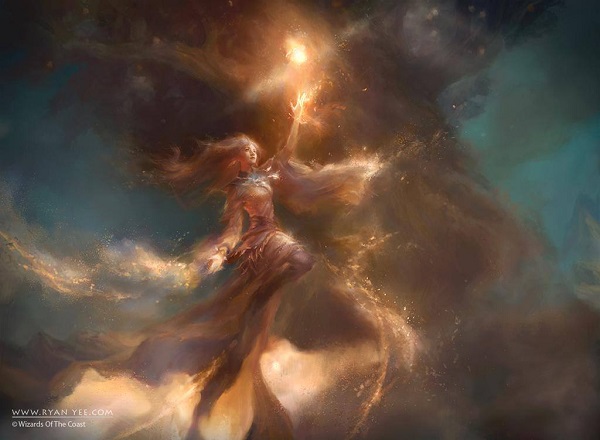 Fruit of the First Tree by Ryan Yee

Ryan was given Anafenza and the Abzan spirits. It was an excellent choice by the art director to take Ryanâs more conceptual interpretation on an art description for a dying creature which draws cards.

Itâs haunting. Itâs eerie and beautiful. Nothing else to say on why this works. 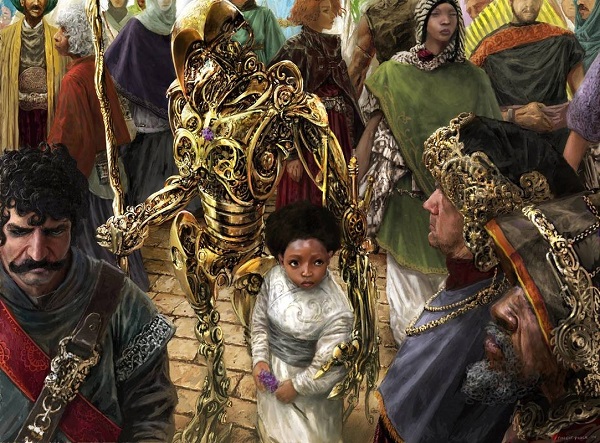 I wrote about this masterpiece in my Origins Art Review. I wrote about the serene scene amidst a busy street. Vincent created a strong scene with ease, integrating numerous diverse characters into a 2âx3â square. Not to mention how well the figures read at card size.

As Kaladesh images go, this snapshot clues us in to an immense amount of information about the culture of the plane. We see constructs as babysitters, ornamentation is constant, and the streets are busy. I want to see this zoomed out to see more, and in a few short months, we do get to see more. 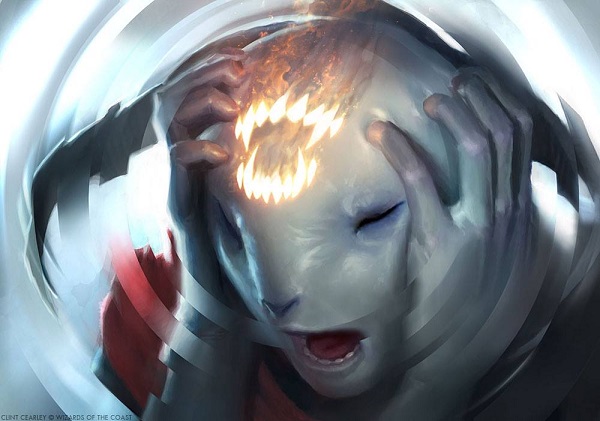 Distress was a previous category winner and a reprinted card. Itâs mighty difficult to ignore a previous version and not integrate anything for fan service or, frankly, determine how far you should deviate. At size, itâs really hard to see the fingers pushing into the creatureâs head. You miss the best part of the artwork! I thought immediately of Bernini when I saw the fingers pressed into flesh.

Detail of the Bernini masterpiece

The concentric circles are so impossible to paint. There are blurred lines to show focus on the pain. 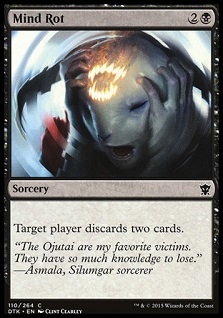 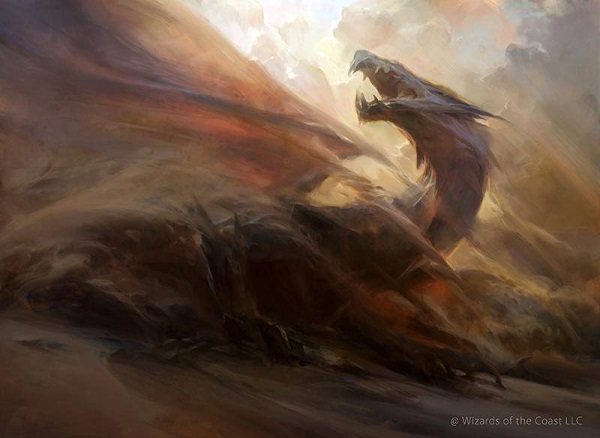 Remove the card frame and doesnât this card artwork breathe?

Itâs almost a deconstructed dragon, isnât it? Take all the forms that mean Dragon, then strip away each piece until all you have left are only the most essential forms.

Taken to its most bare form, we recognize a Dragon also being annihilated by wisps of sand with a triangle for a wing and a serpentine head. Itâs dynamic, the way the digital brushstrokes imply sand. Keeping the palette limited in color choice grounds it on the plane of Tarkir. Were this traditionally painted, it would look almost identical.

In addition to the art, art directors can also be nominated. Often one of the art directors at Wizards of the Coast, whether it be Dungeons and Dragons or Magic is nominated. They make the most amount of art in the entire field. Itâd be rather odd to not have a Wizards art director nominated.

Ron Spears won his category in 2000 for being a Magic art director. Jeremy Jarvis has been nominated five times, 2007, 2009, 2010, 2015 and 2016. Recall I mentioned the community is small? Well, book cover people and people who love Magic card art arenât the same people. Since so few TCGs exist producing phenomenal art, getting acceptance into the fine art crowd has taken time and constant knocking at the door for nominations. Letâs hope this year is the year Jeremy Jarvis is finally recognized for his world building efforts and vision for making planes visually unique and immersive places to visit.

Good luck to the artists and Jeremy!