Letâs talk about art today. Specifically, letâs talk a little deeper about visceral art. Controversial art usually means controversially negative, as outcry is generally a poorly received context. But as infamy is just negative fame, itâs still relevant. Magic has had a little blip of âcontroversialâ art this week, so Iâd like to showcase a few things to put things into perspective.

Letâs touch base with a little history.

The Nude Maja by Francisco Goya

This piece fired up the public something fierce because the woman is gazing directly at the viewer. There is no modesty, no aversion of her eyes to her nakedness. She is nude, but she is no longer naked. This was a huge deal at the time. Showing a nude womanâs back, reclining, was a lot more common than seemingly an actual painting, of an actual woman. The nude as actual person is so synonymous with art now that itâs even a Drawing 101 practice in nearly every college class.

Whether Duchampâor R. Mutt, as he signed itâmade this urinal with his own hands or not has no importance. What changed and was so controversial was that he, as an artist, chose it. He took a normal object, removed its normal context and significance, and put it on a pedestal for people to look at it with a new view with a new title. He literally created meaning out of nothing. That is art in a nutshell: An artist can add intention to anything and make it art. Whether or not you or I believe this is good art, or valuable art, isnât even important. It is art, whether or not we agree. Itâs a hard concept, even today, to explain to someone that even a poorly made painting or popsicle statue is still art. It could also be craft art or fiber art, too, but itâs art.

Serrano originally made it to comment on the cheapening of Christian icons in contemporary culture, it being a cheap plastic cross in a jar of his own urine. He didnât intend it to denounce religion, but even today, whenever this photograph sees an exhibition, vandalism often happens because of how it was made, no matter how rather lovely the actual image looks. His original comments on it to the first crowd that saw it was that he thought it looked pretty. He intended for it to be beautiful and then laid a groundwork for people to interact with, to shock depending on the viewerâs comfort level. Heâs now so attached to being shocking that heâs quite tame, like Lady Gaga or Miley Cyrus.

These paintings were made to push a narrative, a discussion of what it means to be art and what intention can have on public discourse. Intention is what makes them great art. Their role matters because the artists wanted their intention to be larger than life, and at worst, larger than the sum of just the technical prowess of creating the work.

Magic creates the largest amount of fantasy art in their entire genreâand probably more in this Imaginative Realism niche, the fine art nameâthan anything else thus far. As such, their main intention is making great art from art descriptions that create immersive experiences for the game. Art descriptions can reflect, mirror, or showcase card mechanics or they can be conceptual or really anything âfittingâ to the brand. Among the historical instances, only a few have risen to a large public discussion, similar to the three artworks posted above.

The most recent, and arguably most viscerally discussed, was Triumph of Ferocity. 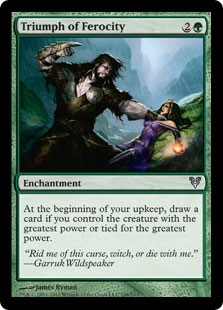 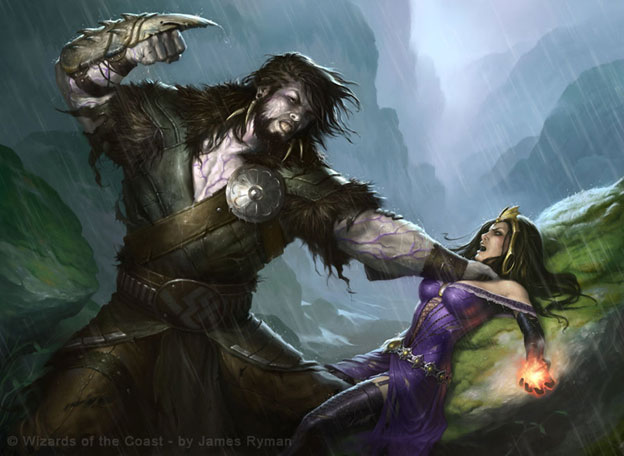 Triumph of Ferocity by James Ryman

This artwork has a variety of issues to it, which have been stated and restated numerous times. What cannot be ignored is that this artwork, on a singular card in a collectible card game, had visceral reactions enough that the brand director for the entire game commented on it below, summarized by this source: 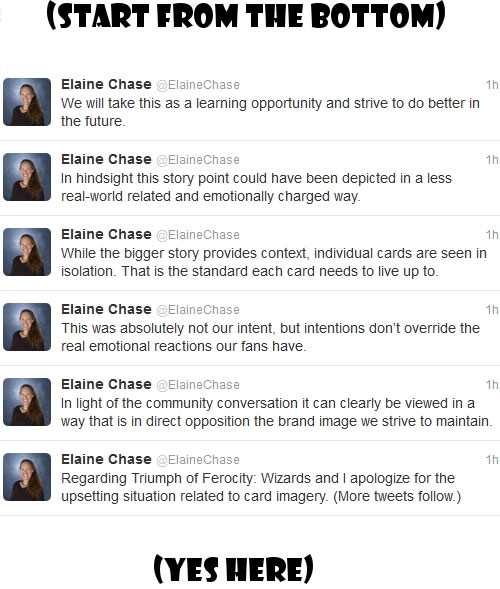 The artistâs intention here is irrelevant because the creator of the art, Wizards of the Coast, who wrote the art description, did not intend the meaning to be anything other than a struggle between two major characters. Whether or not you or I like the artwork, enjoy the technical aspects, or see the meaning matters little; what matters going forward is that if art doesnât live up to expectations, corrections will be made.

Triumph of Ferocity was given new art in the digital game Duels of the Planeswalkers and will be Kopinskiâs art going forward. Iâm not trying to be flippant in diminishing the impact, importance, or negative connotations that the original depiction had, but I only need to say that Magic canât be heedless in writing art descriptions, proofing sketches, or approving final artworks for even a second. Even the most minor of cards has impact, visibility, and importance to the narrative of the entire Imaginative Realism art field. 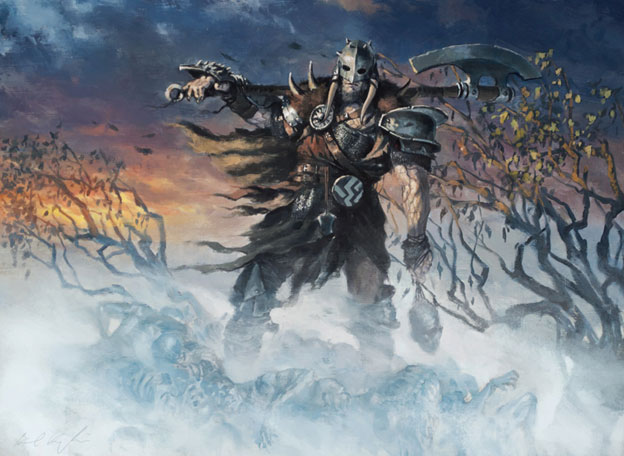 Triumph of Ferocity by Karl Kopinski

This brings us to today: 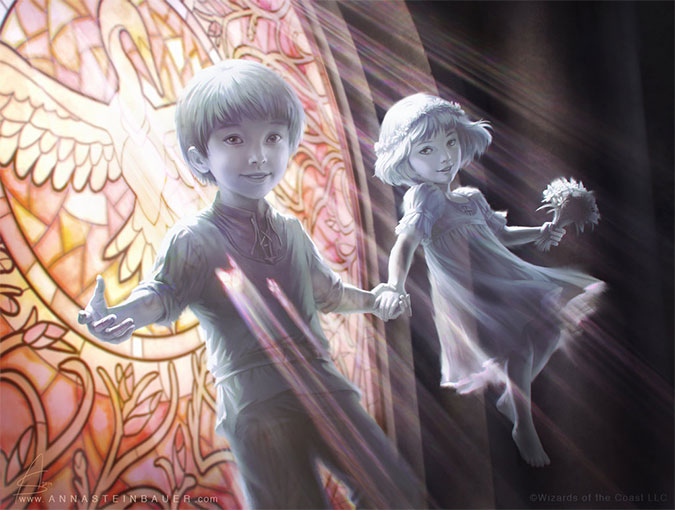 Showing children as ghosts? Alluding to them as martyrs to a cause, of some sort? Is this card also impossible to ignore? Was the intention for dead kids to be shown? Yes. Is that okay in a card game? Is this just a tribute card to someone near Wizards of the Coast and we donât just get it? Jamie Wakefieldâs mare was indeedâa card and also a wife. Did no one realize that saying, âI block with the dead kids,â might be the tamest line people use?

@mtgaaron I'm summoning somebody's martyred innocent kids to go fight for me? This card is wrong.

I think Blessed Spirits has managed to surpass Village Cannibals in terms of art that makes me uncomfortable.

I dislike the art direction on Blessed Spirits. Something about the ghosts of dead children doesn't sit well with me at all.

There's some creepy fucking shit in this game, and that's fine; I do however draw the line at dead kids.

Wizards: "We apologize that Triumph of Ferocity may reflect real world situations poorly... but FU, here's some dead kids!"

Just pointed out the flavor text on blessed spirits to my wife, she instantly started crying hysterically and called me an asshole...

Whether or not you like the art, to say it isn't important is laughable.

Nearly anything can be art with mere intention, so said Duchamp, and this is true of much of the âbad artâ you hear about in the news. Good art creates a responseâa visceral, impactful response when you like it, love it, or hate it. The worst it can do is be ignored.

I donât expect Magic to ever cover every atrocity of war or be able to show the full gamut of the human experience, but theyâre pushing at what it means to be the main player in the industry. A black male warrior with natural hair, a trans character, and even ghost kids were thought-out decisions. I hope this trend continues and that we will see more gray areas investigated soon. I hope itâs not to Serranoâs level to merely shock us, but to push the entire genre forward as what is acceptable, wise, and needed.

Art has never been more relevant to Magic than this year. Letâs celebrate it.