All right. Youâve suffered through the holidays, got your friends and family some serviceable gifts, all backed by warm, fuzzy thoughts. You overate and overimbibed (hopefully). You took some time off from the stresses of work and/or school. Maybe you did something nice for someone in need or for a charity. Maybe you were a total selfish !@#$% and only went shopping for yourself, played games all weekend, and didnât get in touch with your friends. Fine. Whatever you did over Xmas, now itâs the real crucible of the holiday season: New Yearâs. Time to face the music, bro.

Was 2012 all you wanted it to be? When you faced down the Mayan Apocalypse, were you going out swinging in a blaze of gloryâor limping out like a doormat? Would you have been happy with your lifeâs legacy? As we look toward 2013, I advise you to not only work on becoming a better version of yourself, but also on becoming a better Vorthos this year.

Vorthos, in spite of his regrettable moustache, represents a visceral connection with fantasy that is nothing short of awesome-sexy. While it makes me ecstatic that franchises like Game of Thrones and The Hunger Games have crossed the mainstream threshold and are schooling millions on the radness of swords, sworcery, and geekiness, it means that we, the mage-elite of dorks, have to step up our game and represent. Here are my humble suggestions for incorporating fantasy into your life in 2013 while having fun being the baddest, most legit nerd on the block.

I donât mean to sound like an old nag on this point, but just get one print. Itâs $15 for a favorite card image that youâll have for life. Trust me: It makes you feel like a million-dollar baller to hang it on your wall. 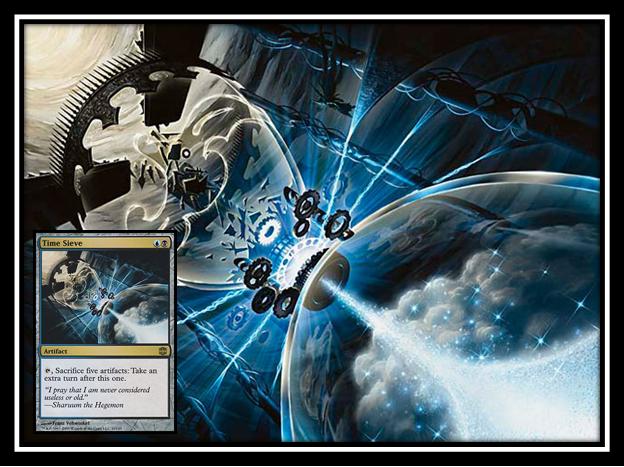 Scale comparison of your favorite Magic card to a standard letter-size print.

Start here for some ideas, or just Google the name you see at the bottom of the cardâmost artists have prints available through their personal websites. Remember that if you buy a print in person at an event, the artist will sign it for you, too.

Choose Unique Tokens/Markers (or Make Your Own)

Yeah, get in touch with your granny-crafty side. Itâs so easy to make your own swag. A couple clicks of the mouse and some printer ink and youâre there. How better to remind your opponent that you turned her Angel into one of your Vampires? 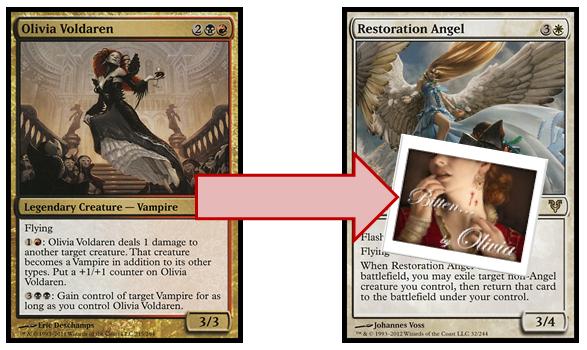 Or find premade stuff that adds a personal twist to your deck accessoriesâJohn Dale Beetyâs Scrabble tiles for Soulbound come to mind, and I have some Schleike toy squirrels to add some 3D chittering action to my Squirrel deck. You do know there are four different 3/3 Beast tokens that can erupt from your dying Thragtusk, right? 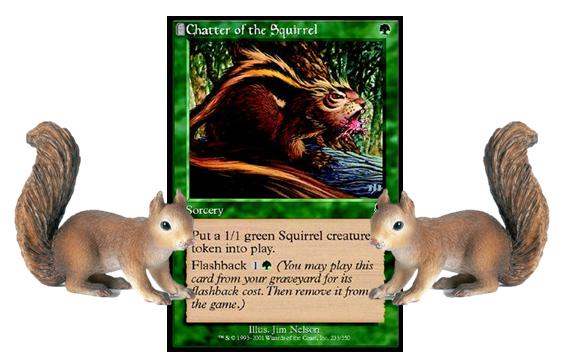 Get a Card Alteredâor Alter Your Own

Scary! But once youâve put brush to card, itâs addictive. Or find an artistic friend to do one for you. Altering cards is a great hobby if you just want to express yourself, and itâs also a great way to support local artists if you want a pro job. There are a ton of resources out there, and many even right here on GatheringMagic to help you either get started as an alterist or to commission a piece, so give it a try!

I was really focused on the American Domestic Shorthair in this deck, but there are a few surprise elements. Stave Off is a longtime favorite because of the fervency with which that leonin is defending his bowl of Meow Mix. At least, thatâs how I saw it. And being a Vorthos is about seeing whatâs possible, whatâs between the linesânot just what weâre told is there or what weâre âsupposedâ to see.

The more we support peripheral creative product, the more great Magic content weâll get. You have a lot to choose from, so you should be able to find something that suits you. From comics to fanfic to podcasts to the Wizards-sanctioned novella, thereâs something for everyone to indulge in. Your input is what will make these products better, so read and listen and give feedback. Everyone can afford the $1.99 price tag on The Secretist: Consider it a high-EV charitable donation toward a healthy future for Vorthos-rich Magic.

There is absolutely no reason the Twilight franchise should be a billion-dollar media monster and Magic fiction relegated to a thing of the past. Bella and Edward donât have anything over Liliana and Jace except more exposure for their frowny faces. MTG has angst, too! And we donât have to rely on being a Romeo & Juliet reboot to appeal to the public. There are so many stories to tellâbut it canât happen without your support. If youâre looking for an easy way out, hereâs one way to knock two Vorthos resolutions off your list at once:

READ ALONG & WIN! moxymtg.com/2012/12/returnâ¦ â¦Q:Who was Sheoldred in her past? Tweet your vote at me to enter drawing for JAOT alter! Please RT :)

There are a few groups/communities you should check out if you havenât already. Of course, get on Twitter if you arenât. Itâs an easy way to jump into the Magic dialogueâGatheringMagic shares breaking news like the new Gatecrash spoiler, and we can always use your help keeping the #vorthos hash tag lively. There is also a major Facebook group of note: Planeswalkers for Diversity. Join. For fun and laughs, check out Modophotos. If youâre a lady looking for casual support from like-minded women, Ladies of MTG is chill and there for you.

This is harder than it sounds. I recently told my restaurant coworkers about my involvement in Magic. One response was, âIsnât that Yu-Gi-Oh!? Donât they share some of the same cards?â Another was, âI donât know what Magic or Wizards of the Coast is.â But a couple other people were like, âThatâs rad!â and were totally down and had some knowledge of the game and its components. I realized that I canât be a true representative of the game if Iâm so private about it in my ârealâ life. So say it loud, say it proud. I like to think of it as âcoming out of the wardrobeâ (a la Chronicles of Narnia).

Sprankle spanks the competition when it comes to cosplay. But itâs not her costuming that gets it done, itâs her conviction. This year, find a costume party and rock it. Or dress up on date night and post pics on Twitter. WHATEVER IT TAKES. Start working on that MTG Halloween costume NOW. You love the game, you love the art, now wear your heart on your sleeve/greaves/loinclothâdressing up is sometimes maligned by the ignorant as the epitome of ridiculousness. It is, in reality, the epitome of having huge, humongous, world-shaking balls. 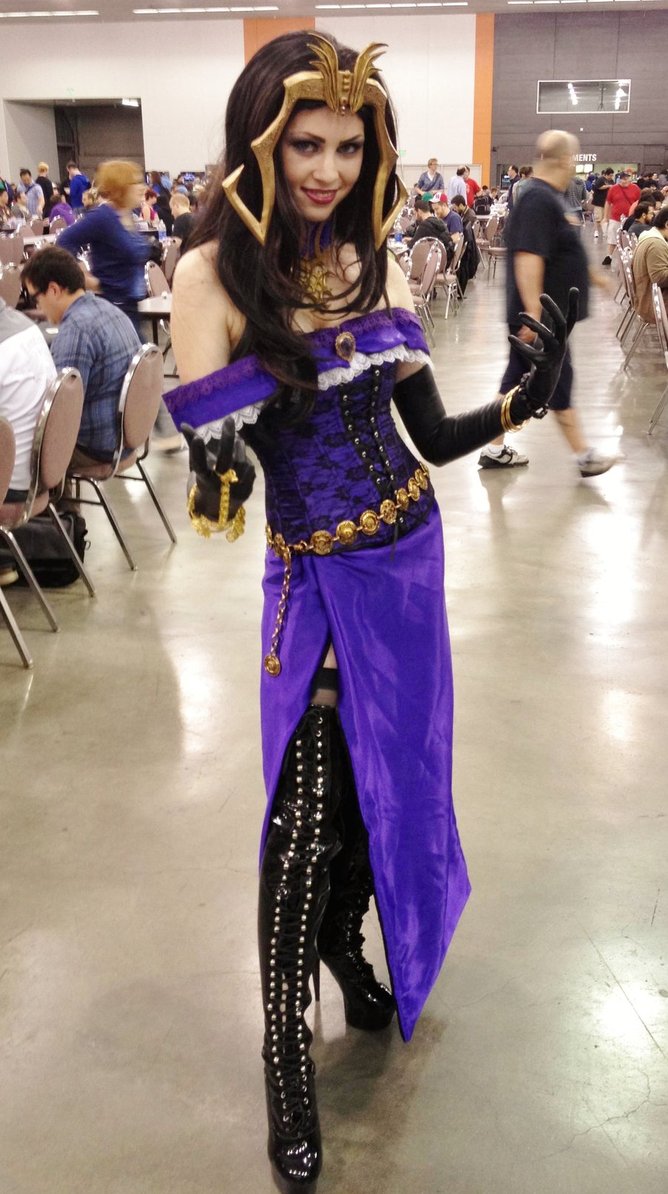 Get the t-shirt, wear a color-coordinated outfit, or for the really insane, get a permanent mark of loyalty. Tifa Meyen, Assistant Brand Manager at Wizards, recently posted pics of her totally committed Simic tat. Considering the quality of MTG art and the guild insignias, using this stuff as tattoo fodder isnât a bad idea. Itâs one million times better than âWinona Forever,â a barbed-wire tribal bro-armband, or a butterfly tramp stamp. 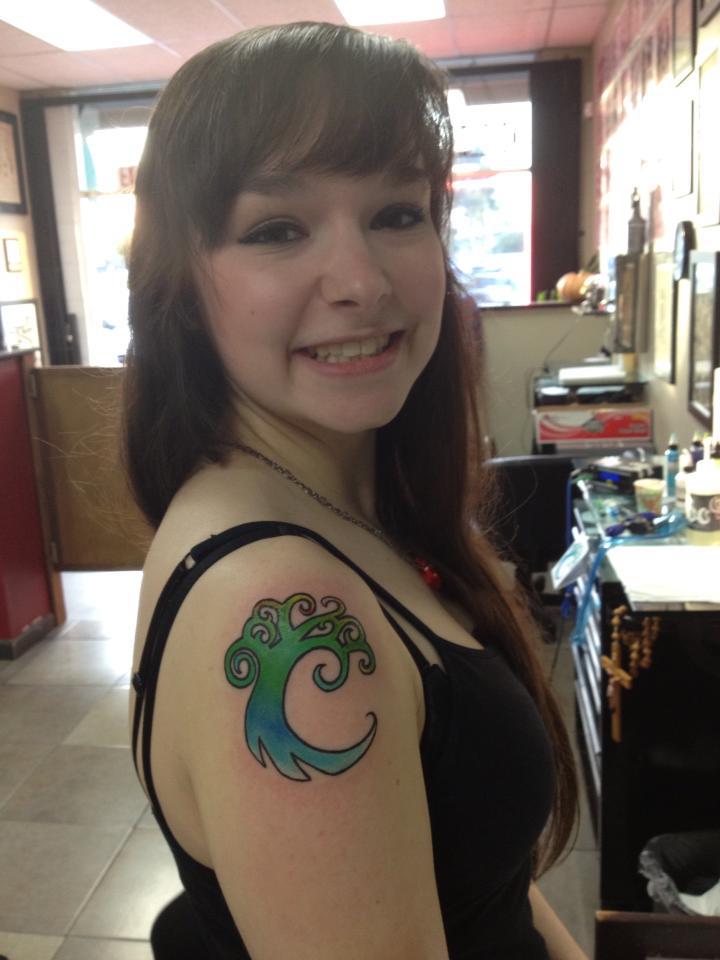 You only live once. Well, if you believe in reincarnation, you might live several timesâbut who knows if itâll be as a grasshopper or mushroom or parameceum. And they canât get Magic tats. This year, expand fantasyâs reach in your life. Rock your Magic with conviction. Make every day Mage Pride Day.