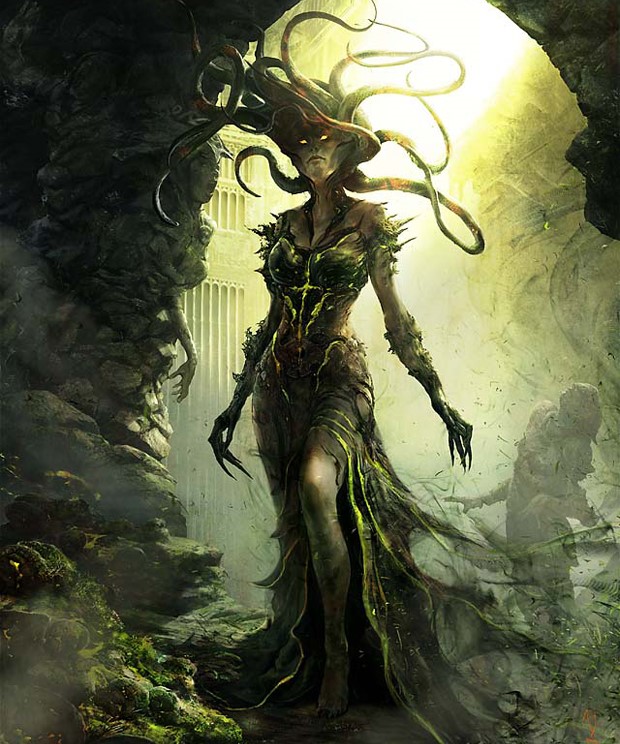 Finally on my way. Made mistake of trying to talk to my parents when I dropped off my son for his day with them.

Stop 1: Ross Dress for Less. Not impressed with selection of gowns at $25 and under. Made mistake of going shopping for attire w/out picture, like a total newb.

Stop 2: Toys âRâ Us. Bought new train toy for my son because he pooped three times in the toilet. Found rubber snakes that look awesome for $9.99 each.

Stop 3: Jo-Ann Fabrics. The devilâs playground. Discover there are such things as bulk packages of preserved moss that are perfect for Vraskaâs details. As usual, thereâs an insane line. Apparently, there was a coupon sale I missed out on because I donât get the little crafty lady mailer. Oddly enough, in line with me I see a statuesque black woman dressed in Shivan brights who had just also been at Ross Dress for Less in the same section as I was. I couldnât be mistakenâsheâs six feet of hard-to-miss. Is she stalking me? She must be a Dimir spy! I donât make eye contact and hurry to my car.

Got home and cracked a cheap tall boy. Time to get to work. 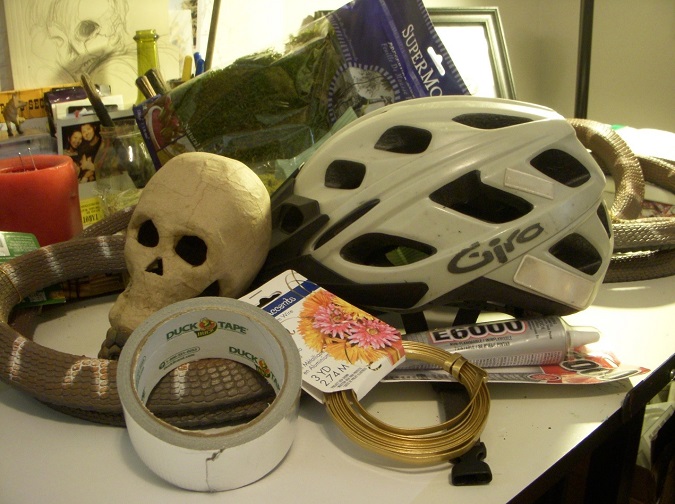 Took an hour-long break from Vraska here to turn in a freelance writing job applicationâfor some kind of travel/destination review site. Ate an avocado.

Now. Time to get a little crafty!

Duct tape is the name of my game. I am pleased to find that the first snake attaches easily to the bike helmet. Dismayed to find the gauge of wire I purchased is not strong enough to use as sculpting form for the rubber snakesâ.â.â.âhave to come up with solution leveraging just the duct tape.

Thought about creating âsnakesâ with fabric then stuffing with polyfill and inserting wire to shapeâwould take too long, and âweightâ of tendrils wouldnât look correct.

Decided to rely on placement of snakes and using their built-in arcs to create illusion of height/size. Vraskaâs headdress is very imposing, so flat, lifeless snakes wonât do for her âdo.

Found that snakes could be looped to gain some height. Held in place with duct tape. Connected snakes together with wireâthe malleable gauge was perfect for this function.

Concerned with weight of headpiece. I already have a headache from wearing it for thirty seconds. Must tighten bike helmet straps to keep in place.

Adjusted snakes to be more balanced on crown. Added premade cardboard skull to front of headdress to act as a lift for smaller tentacles I might add in the future. Also, a flavorful addition that added to the look of âcompletenessâ for the costume.

Painted helmet with black, washable poster paint. Great thing about Golgari is that its style identity is rough around the edges, so no need for extreme neatness. No finished edges required, and I can paint outside the lines! The more organic it looks, the better. 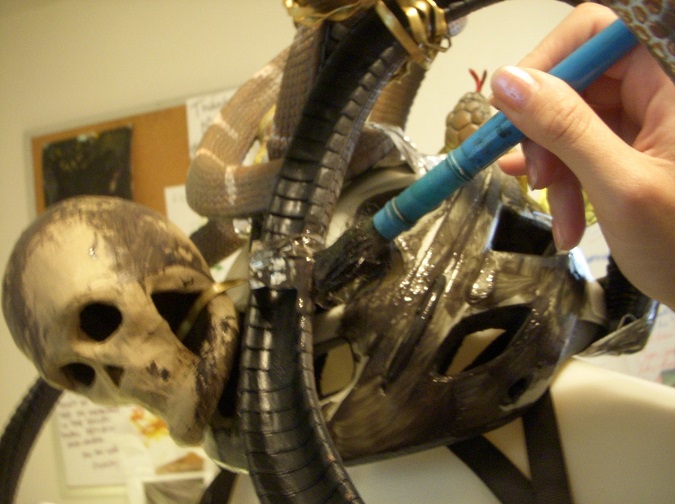 Asphyxiating from the superglue.

Found the paint Iâm using has a distinct blue cast to the âblackâ and flakes when I do double coats. The flaking isnât bad in terms of flavor, but it may prove impractical. Iâm using the washable poster paint because I didnât have time to search out real theatrical full-body makeup. So, I plan to dip myself in paint.

Painted details on the bra Iâm using to give structure to the top. I like building off a good bra because while I hate a super-obvious bra silhouette IRL, in costuming, it photographs well and adds that strong fantasy/sci-fi line. 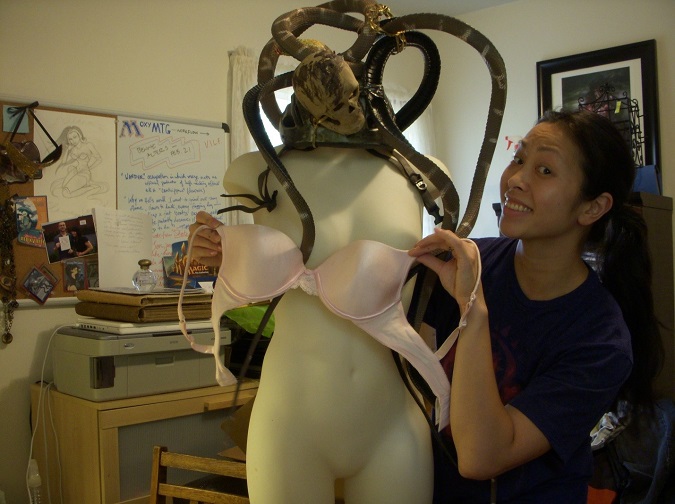 Added dimension to bodice using stapler that my husband borrowed from work. Swingline!

Finally settled on a way to handle Vraskaâs neckpiece and shoulder detail. I have an old cardigan that I think can rig to stand up around my neck. Itâll also help blend in the headdress to the bodice.

Added another layer of paint to the helmet, this time mixed in yellow to the black.

Feeling tired but the dress is almost done. All details added with glue and stapler. Vraskaâs look is deconstructed coutureâvery Derelicte from Zoolanderâso even though itâs organic in feel, I have to make sure it has some strong structural high-end elements to retain that elegance she exudes. 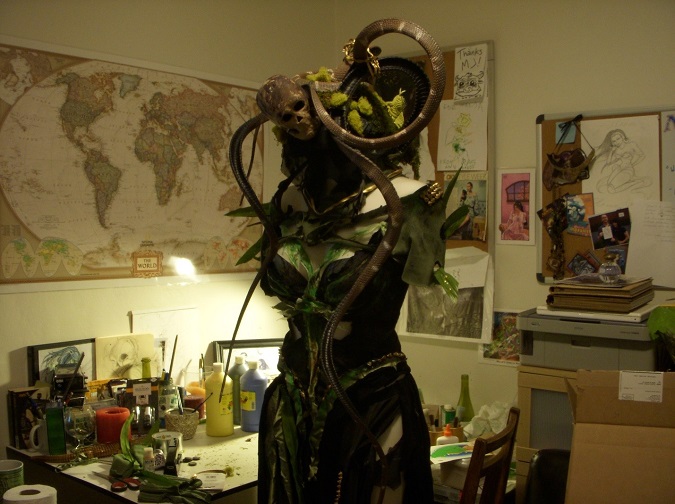 Rethinking my decision to take the visor off the helmet.

Pretty sure good ole Hackworth is going to be upset with meâI havenât been following the ventilation rules on the superglue. THIS PRODUCT KNOWN TO THE STATE OF CALIFORNIA TO CAUSE CANCER. 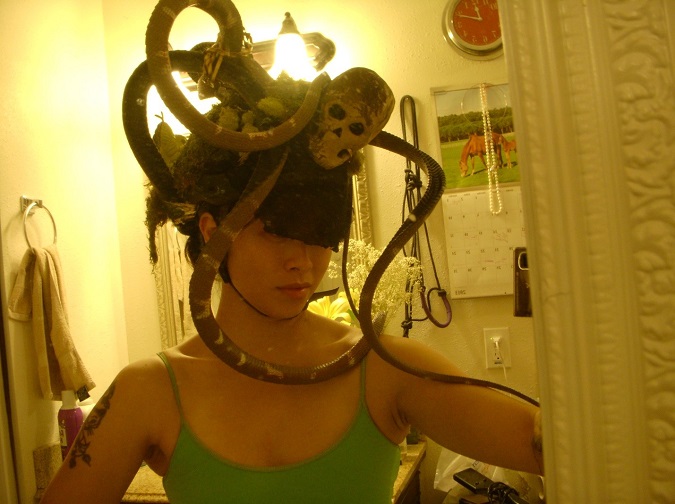 Couldnât resist doing more. I think I avoided another Jo-Ann trip by using some acrylic paint as highlights instead of acquiring new stuffâgold and mixed some Kelly green. I added a Golgari guild symbol to the back of the shrug in Sharpie. I also found some items in the basement that would be great for a Vraska night on the townâ.â.â.âyou know, like when she goes on OkCupid dates in Tin Street Alley. 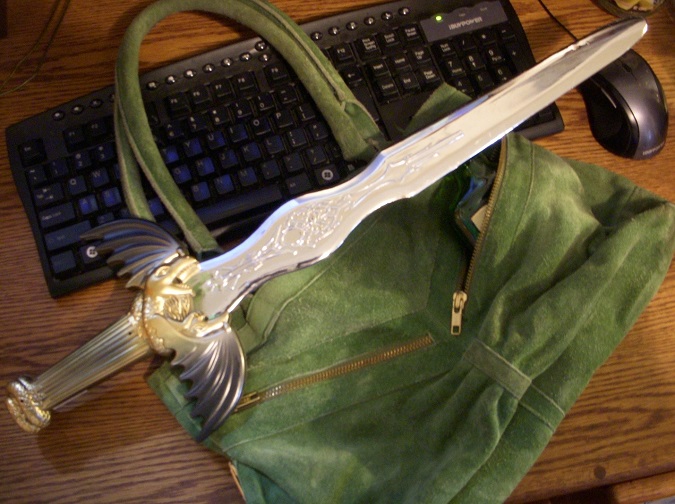 Time to assemble and photograph.

I used a mix of poster paint, black liquid eyeliner, Revlon eye shadow, Nars highlighter, and costume makeup crayons to achieve the Vraska glow. Vraska is very thin, so I duct-tape my torso viciously to add definition. I used to model and am used to suffering for fashion, but I admit I, at this moment, regret eating all that fried chicken on Thursdayâsort of. Maybe weâll solve that with my Theros Fitness Makeover, coming soon!

The costume is way-uncomfortable, and parts of my âskinâ are flaking off. This does, however, have the silver lining of adding a really, really cool marbled/cracked stone look to my getup. Gorgon realism.

The makeup oddly photographs brown. Iâm looking in the mirror, and Iâm green. Then, I look at my cameraâs viewfinder, and Iâm brown. Huh. Iâm sure professional makeup artists are aware of this kind of discrepancy. Iâm frustrated at the momentâbut I just need to find the right lighting in the house.

The kitchen window provides the answer. 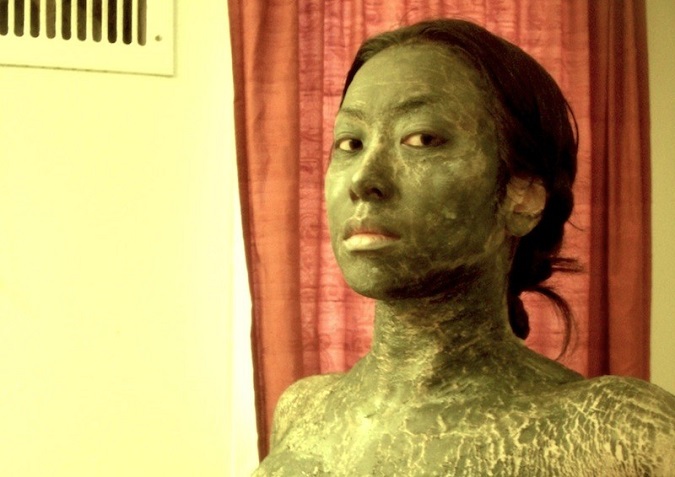 My actual entry to the contest:

I love the power and elegance of gorgons, and overall, I am pleased with how the costume turned out. Obviously, this was for a photo shootâas I wouldnât have been able to go to an event or even walk down the street without my hide disintegrating. Thatâs flavorful, though.

Analysis of My Results 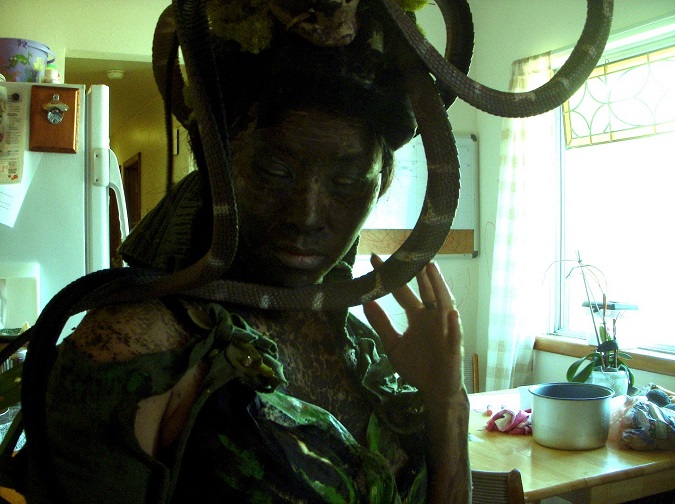 âTill next time, may Magic be your HEAD FULL OF TENTACLES, son. Hope you enjoyed the pictures. Keep an eye out for more #vraska in days to come.