With Double Masters on the horizon leaning heavily on nostalgia and reprints, it is easy to look back fondly at Magic's long and storied history. For many of us, Magic has been a large part of our life for a long time. As a 36 year old Magic player, I've been playing for over half my life, which is quite a bit to look back on! Today's nostalgia-trip article is inspired by a birthday present given to Sam Pardee (@Smdster) by Carolyn Kavanagh (@MightyLinguine):

Got a sick birthday present from @MightyLinguine: my spellbook! I'll do a quick hit on why each card is on the list. Cards are: Thassa, Teferi, A mirror-hating goblin, Shivan Dragon, Hardened Scales, Grim Flayer, Finks, Birthing Pod, and Thought-Knot Seer. pic.twitter.com/nOOGIH2gba

Aside from just admiring what a sweet present and presentation it is, it got me to thinking about what the "Signature Spellbook: Jim Davis" would look like. (For those who are unaware, the Signature Spellbook series is a set of eight cards based around a particular planeswalker. For example, Signature Spellbook: Chandra has Cathartic Reunion, Young Pyromancer, and more).

Each of these eight cards has special significance to some aspect of my Magic playing career. The goal was not only to pick cards that I have done well with at events, but also to showcase cards that help to define who I am as a Magic player and what kind of decks that I like to build and play.

Where else to start but with a goblin!

I often think about how fun it would be if life had a "stats window" we could load up and see our lifetime stats on certain things. How many slices of pizza have I eaten in my life? How many total steps have I taken? How many times have I hit the "J" key on my keyboard? Of these stats however, I am fairly certain I hold the lifetime record on one of them:

I have been playing Goblins forever, since before Mogg War Marshal was printed, and have played the card in every format it was legal in. I also love to get full value out of my cards, and in many of the more grindy matchups paying echo was a great way to do that. And even when you're not paying the echo, Mogg War Marshal is still a fantastic enabler for the Goblin deck.

Sure, it's not as flashy as Goblin Lackey or Goblin Ringleader, but Goblins is a synergy deck that needs it's parts to work together to form something great. From providing bodies for Gempalm Incinerator, to helping fuel big turns with Skirk Prospector, to just giving you a free block to pad your life total, Mogg War Marshal is the blue collar goblin who gets the job done.

Venerated Loxodon is such an awesome Magic card. By itself it's just a mediocre Limited card, but when surrounded by the proper tools it can lead to unbelievably powerful openings.

This is a common thread you will see among all the cards today - I like Magic cards that need to work together with other cards to become more than the sum of their parts. Give me Mulldrifter or Ninja of the Deep Hours any day over Baneslayer Angel or Oko, Thief of Crowns.

Venerated Loxodon has a lot of tournament pedigree. It has been at times a dominating force in Standard, powering out a monstrous amount of power as early as turn three. The awesome part about Venerated Loxodon was also how well in diversified your battlefield. If your opponent played Deafening Clarion? There was the 4/4 elephant ready to battle the following turn. How about Ritual of Soot? Same story.

However, it was Modern where I really enjoyed Venerated Loxodon, forming the backbone of my Loxobots deck. If you though 1-drops into Venerated Loxodon was fast in Standard, zero-drops were even faster! I'd bring the deck to a decent finish at an SCG Tour Invitational, but ultimately the banning of Mox Opal killed the deck.

If you know me you know I love a control deck, but not just any control deck; I love pure draw-go control decks. All instants, all counterspells, and some sort of incidental win condition. These sorts of decks need to draw cards and it is rare that a card like Sphinx's Revelation is legal.

Another real blue collar Magic card, Jace's Ingenuity is the "fixed" Ancestral Recall. All it took was to add four more mana to the cost and you've got a fair Magic card! Nothing about Jace's Ingenuity is exceptionally flashy or powerful, but it fits the draw go strategy perfectly. "Medium power level card draw instant" is definitely my type, as cards like Glimmer of Genius and Chemister's Insight are also cut from this mold, but Jace's Ingenuity is the one that really stands out. We've had Precognative Perception legal in Standard for a while now, but the Teferi, Time Raveler, Narset, Parter of Veils, and Mystical Dispute format is a pretty hostile one for Blue card draw instants.

Jace's Ingenuity should be evergreen!

Magic has changed a lot for me in the last few years.

While it used to be late night Magic Online grinding in the quiet of my bedroom to practice and prepare for whatever Grand Prix or Pro Tour was coming up, now I mostly play with the lights and camera on for my stream or YouTube. Content creation has been the name of the game for the last few years for me, putting a renewed focus on fun and entertainment over pure tournament results.

One of the really fun mixes of both was my jaunt with Angrath, the Flame-Chained. 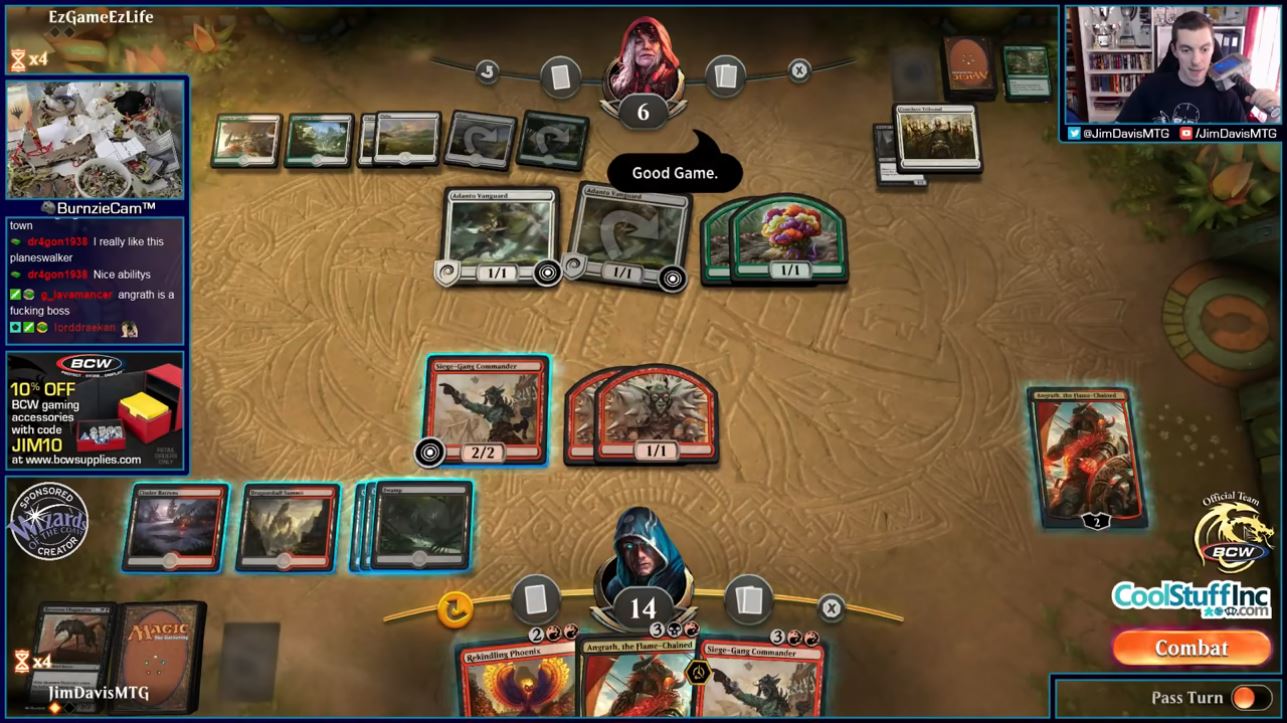 Aside from being a sweet card I played in a number of decks while it was legal in Standard, as well as taking it to a 6-2 Standard finish at the SCGCON Winter 2019, Angrath was also a huge hit on stream. I stole my stepson's toy Mjolnir (Thor's hammer) and would wield it aggressively whenever we cast Angrath. Angrath was happily described as "the most metal planeswalker ever" and many good times were had.

It's not always just about results and playability, making Angrath a memorable stream and content memory.

Okay look, not every card is going to be from a tournament, great stream moment, or even from this century. The first deck I ever built that actually did something (rather than just be a pile of cards) was a big Blue creature deck when I was in high school and was still very new to the game. I had been given some old cards by a friend and constructed a Mono-Blue monstrosity that had a very specific plan:

Can't be targeted, can't be blocked... it's unstoppable! To help cast our 8-drop I was running cards like High Tide, Apprentice Wizard, and various counterspells. You better believe both Polar Kraken and Leviathan were also in this deck.

It's funny to look back at, but everyone's gotta start somewhere! And no, there's no decklist for this one. You'll just have to imagine it for yourself.

Ah yes, "the best card ever printed." I have an SCG Tour Open win with Tireless Tracker, which helped to spark the flame of Team MGG, but it goes deeper than that.

This is why I've always hated Merfolk Looter effects... I just want to keep my lands and play them! I want to play the lands I draw, so I can use the mana to draw even more cards. This, of course, is a thing when you're playing control decks, but is so with other decks as well. I lean toward mana hungry decks that always have something to with the extra mana.

Back in 2014 I was a regular on the SCG Tour and had made a name for myself playing Sphinx's Revelation control decks whenever possible. However, I took a big risk at the SCG Tour Open in Providence with my

Control list, moving away from the stock Detention Sphere and to a bulk rare in Planar Cleansing. Abrupt Decay was everywhere as people looked for a removal spell that was still good against control, while people were also turning to even more planeswalkers that were difficult to handle for the Supreme Verdict deck.

I made the switch to Planar Cleansing and was instantly reward, first by destroying a board of Xenagos, the Reveler, Elspeth, Sun's Champion, and many assorted tokens from a seemingly unwinnable position in my very first game of the tournament, all the way up to the top 4 where I took a very close loss to Ross Merriam.

The Planar Cleansing tech would catch on, eventually winning the upcoming Pro Tour in the hands of Ivan Floch.

The best for last!

There probably aren't too many people who can say that a planeswalker ultimate changed their life, but when I activated the -10 on my Ugin, the Spirit Dragon to seal the deal against Todd Anderson in the 2015 Starcitygames.com Player's Championship, it was a life altering experience.

$20,000 is no joke, but more importantly the influx of attention plus the financial means to give full content creation a shot put me where you see me now - an extremely lucky man who gets to do what he loves playing games for a living.

The best part was, I had to de-sleeve two of the four Ugin, the Spirit Dragon from my Standard deck to put them into my Modern Tron deck for that match! It was all Ugin all the time that weekend and it paid off big time.

Perhaps the most elegant and beautiful thing about Magic is how personal it is.

With so many different ways to play and types of cards and strategies, players get an opportunity to find the things that really resonate with them. If you compiled the Signature Spellbook of ten thousand Magic players, I doubt that any two would be alike.

So, what about you? What would your Signature Spellbook look like?