There have been sixteen StarCityGames Open tournaments since Standard rotated last October. This chart recaps the first- and second-place decks and the creature and removal cards with the most copies played in the Top 16 of each tournament.

2 #SCGSD was a tie between Diregraf Ghoul, Falkenrath Aristocrat, Geralf's Messenger, Gravecrawler, Hellrider, Huntmaster of the Fells, Knight of Infamy, and Thragtusk.

Here are the most-played creatures in the Top 16 decks since rotation by both total number of copies played and the percentage of decks in which the card appeared. 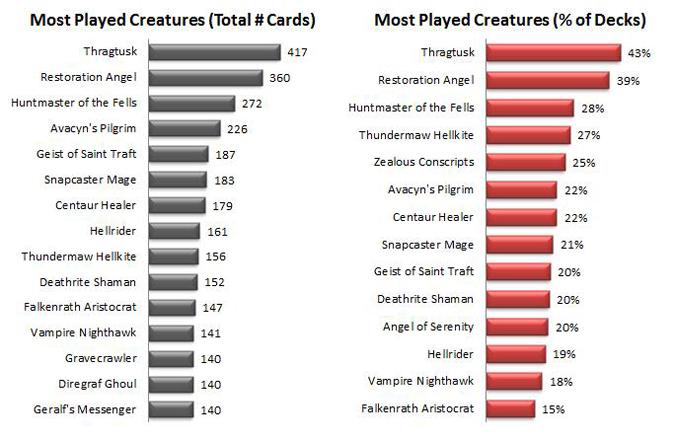 Note the gap between the top two creaturesâThragtusk and Restoration Angelâand the rest of the pack. Both creatures have appeared in many successful decks:

The following graph shows the trend in number of Top 16 decks key creatures appeared in tournament-by-tournament this Standard season. 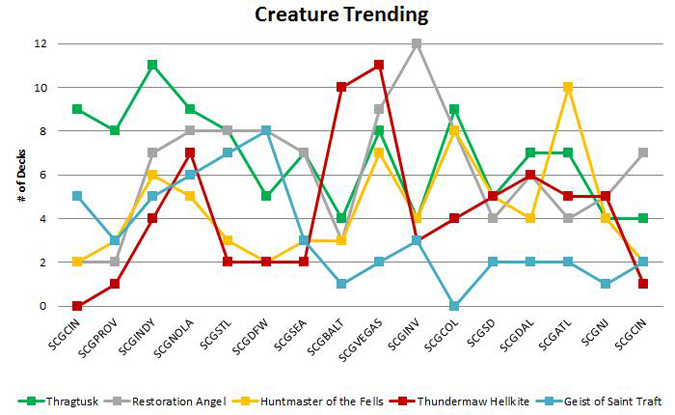 Thragtusk has been a steady presence, appearing in an average of 6.8 decks per tournament and never dropping below 4. Thundermaw Hellkite has been much more volatile. It peaked at 11 decks in Vegas but averaged 4.3 decks per Top 16.

This chart shows the average number of copies played per deck in each tournament.

Removal of the Top 16

We turn now to removal spells played in the Top 16 decks since rotation: 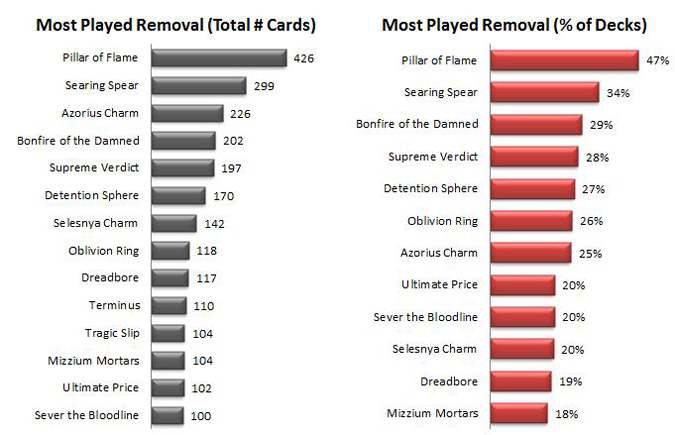 Pillar of Flame was played in more decks than was any other card in Standard, and it had the second-most copies played after Mountain (444).

Here are the trends for some key removal spells: 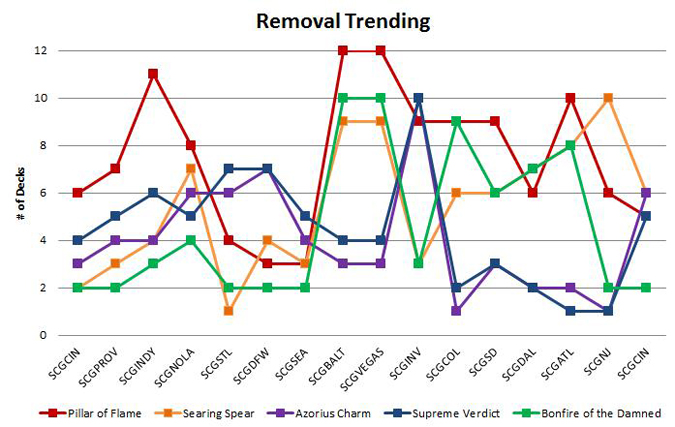 Pillar of Flame and Searing Spear were played side by side in many decks but not in all of them. You can see the tension between players wanting better Zombie mitigation (Pillar) versus instant-speed answers (Spear).

This chart shows the average number of copies played per deck in each tournament.

The targeted spells averaged between three and four copies per deck, while the sweepers were close to three per deck.

Counterspells and Cavern of Souls

An interesting story in Standard has been the rise and fall of counter magic. Here are the trends for the most used counter spells and their arch nemesis: Cavern of Souls. 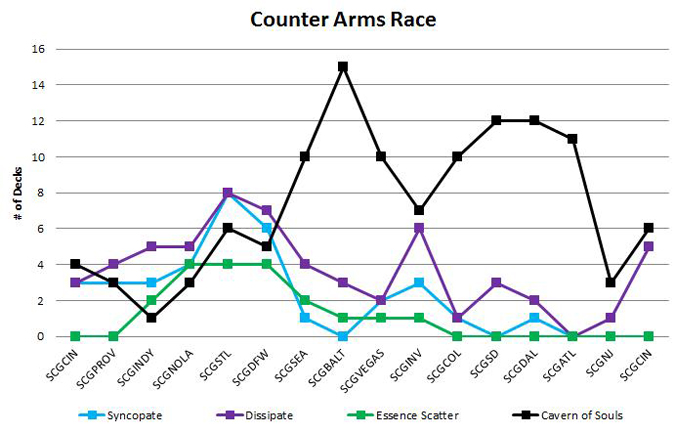 It became clear very early in this Standard season that Thragtusk was the dominant creature of the metagame. One of the best ways to mitigate the impact of the Beast and other high-value creatures was countermagic, and you can see the rise in the use of counters to a peak at SCG Open: Saint Louis.

In response, most creature-based decks began using Cavern of Souls, making it among the most popular cards in the metagame. It has appeared in over 46% of Top 16 decks. You can see the sharp increase in Cavern of Souls around SCG Open: Seattle in mid-November and a corresponding decline in counters as control and tempo decks sought different answers to creature threats.

The Color of Magic

Blue-based decks dominated the Standard metagame prior to the arrival of Return to Ravnica. The following graph reviews the number of decks that played each color in the Top 16 of SCG Open Standard tournaments since rotation. 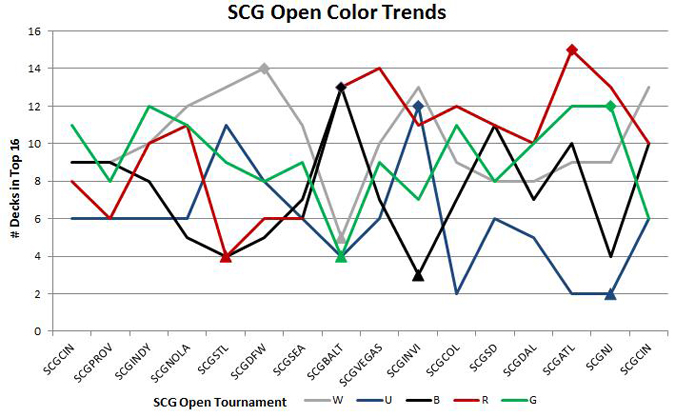 Standard has been an aggressive, creature-driven metagame thus far. Aggro and midrange decks have made up a combined 73% of the SCG Open Top 16 decks. Here is the breakdown by strategy: 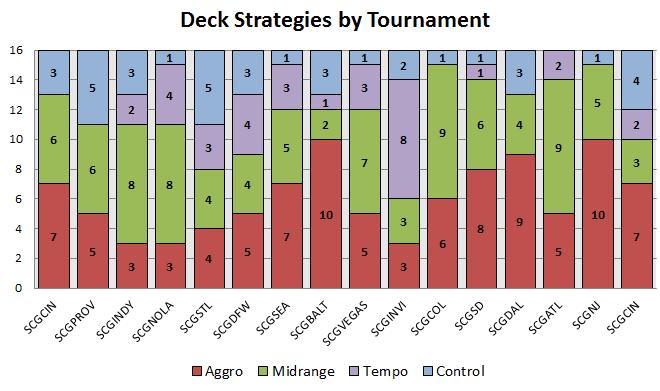 Rotation happened almost five months ago, and we have seen twenty-three major Standard tournaments since then. Here are the deck archetypes with the most Top 16 finishes to date. 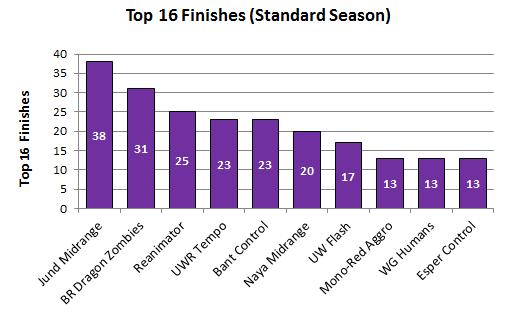 The following graph takes a more recent view and displays the deck archetypes with the most Top 16 finishes over the last month.

Boros Reckoner might be getting all the press, but Jund decks continue to place well in major Standard tournaments. Since being shut out of the Top 16 at the SCG Invitational in Los Angeles, Jund midrange has been on a roll.

Jund aggro has also heated up in the last month.

The overall rankings of Pro Tour: Gatecrash were based on the total points scored between Standard and Booster Draft play. Six of the top seven players with the most points scored in Standard did not make the Top 16 and therefore were not represented in my Pro Tour breakdown last week.

This week, Iâll focus on the best Standard decks of the tournament. Letâs start with the top nine Standard Point earners and the decks they played.

Jund colors make up over half of these decks, with three midrange and two aggro decks. Digging deeper, we can examine the types of decks played by the forty-three players who earned twenty or more points in Standard. 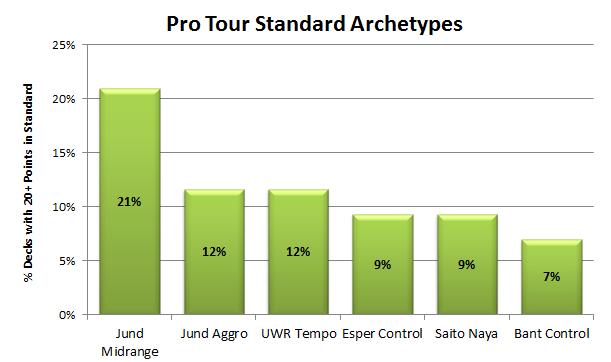 Jund decks make up a third of the top point earners, with nine Jund midrange and five Jund aggro. Boros Reckoner has fueled the return of R/W/U tempo, with five decks each playing the full four Minotaur Wizards.

Gatecrash has been Standard-legal for several major tournaments: Pro Tour: Gatecrash and SCG Opens: Atlanta, Edison, and Cincinnati. Here are all of the new cards that saw play in the Top 16 decks from those tournaments.

What Do You Think? Standard Expense

Magic can be an expensive game. Booster packs, singles, tournaments, and many other expenses compete for your cash. The average cost of a Top 16 deck has hovered between $500 and $600 for much of the current metagame. This brings us to my poll question for this week:

In last weekâs article, I asked, âWhich creature will see the most play in the SCG Open: Cincinnati Top 16?â You answered, and here are the results of the poll: 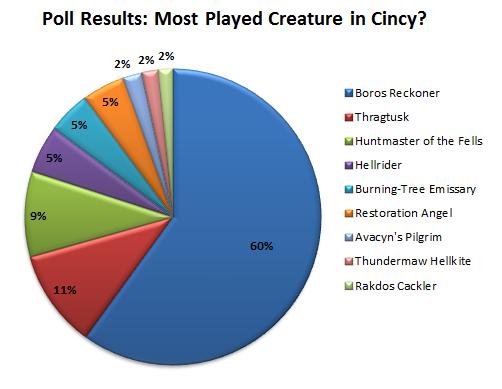 The correct answer, predicted by 60%, is Boros Reckoner, and by a wide margin. 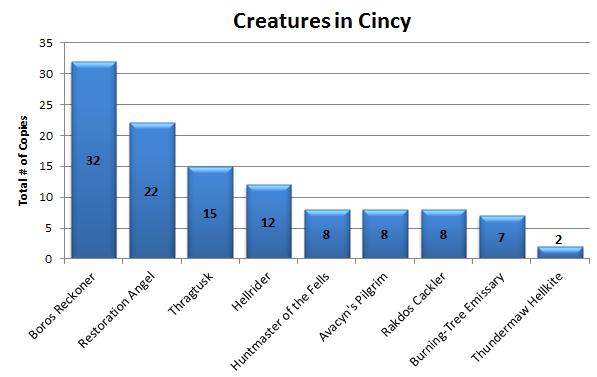 That concludes the Standard Almanac. Join me next week when I review the results of SCG Open: Las Vegas and check in on the state of the Standard metagame. Thanks for reading!