Here are the Top 16 decks from StarCityGames Open: Kansas City. I determined the average mana cost of the main deck and prices in dollars and Magic Online tickets by importing each decklist into the Decked Builder app. Dollars are from CoolStuffInc.com and tickets from MTGOTraders.com. The graphs display the strategies, colors, and most-played archetypes of the Top 16. 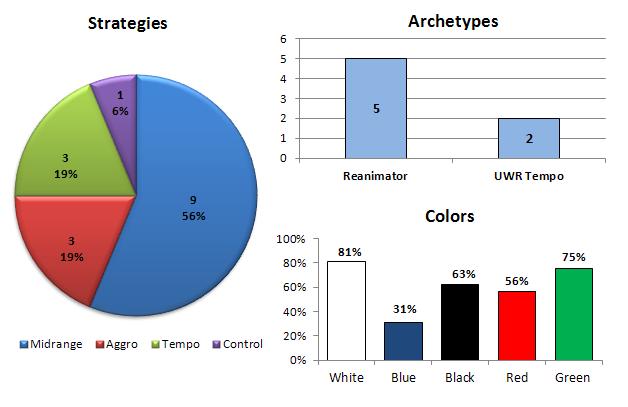 Blue continues to be the least-played color in Standard as Junk and Jund battle for supremacy at the top tables.

The following charts and graphs display the most-played creatures in the Top 16 decks of the tournament. 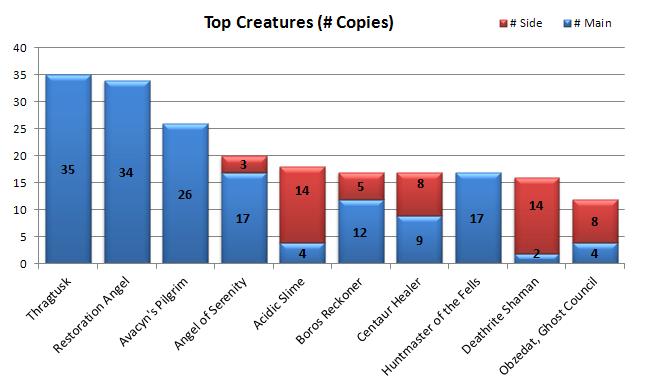 Restoration Angel was played in eleven of the Top 16 decks, the most of any card in Kansas City.

Where might you find these creatures and need a plan to deal with them? Here are the decks they appeared in this week:

The following charts and graphs display the most-played removal spells in the Top 16. 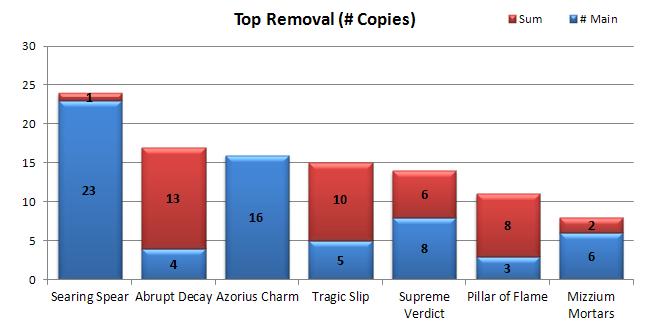 When should you look out for these removal spells and potentially play around them? Here are the decks they appeared in this week:

Here are the cards that have made their first Top 16 appearances at the tournament or that have had only a couple copies played so far.

Slayer of the Wicked

Somberwald Sage has been in a couple Top 16 decks way back in mid-November 2012 at Grand Prix: Bochum and at Grand Prix: Charleston, but it quickly fell off the radar. William Lies resurrected that successful Craterhoof Reanimator deck, finishing ninth, and played the full four Somberwald Sages in KC.

The following graphs track the deck archetypes with the most Top 16 finishes at major Standard tournaments. They include results from not only SCG Open: Indy but also GP: Verona and GP: Rio. 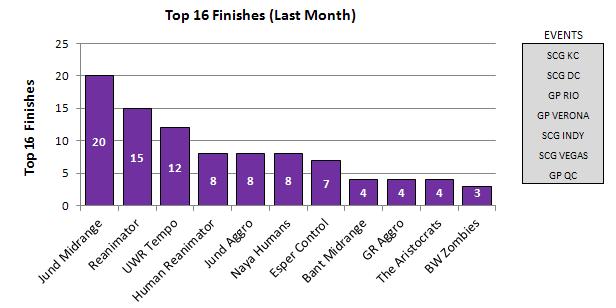 Reanimator continues to steadily gain on Jund Midrange with five more Top 16 finishes this week. Letâs take a look at its recent return to dominance in Standard.

This Standard Season (since rotation) 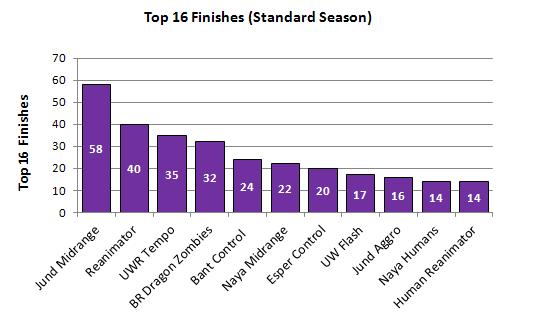 The Reanimator archetype is no stranger to success. As you can see, it is second only to Jund Midrange in total Top 16 appearances since rotation.

By the Numbers: Land Versus Enchantment

Wizards of the Coast has kicked off You Make the Card 4 and asked players to vote to decide what type of card to make. The first vote was a virtual tie between land and enchantment, and last week, they had a run-off vote that was narrowly taken by enchantment. The battle is over, but hostilities remain high between Team Land and Team Enchantment. Part of the community debate, on Twitter and elsewhere, has been on playability: What type of card is most likely to see competitive play? The conventional wisdom seems to be land, but is that true? I can help answer that for Standard!

Here is the total number of each type of card to have been played in at least one Top 16 deck this Standard season:

Land may look like the right answer, but most of theseâtwenty-five in totalâare strictly mana-producing lands such as Temple Garden, Clifftop Retreat, and Rakdos Guildgate. Only thirteen are utility lands such as Kessig Wolf Run and Moorland Haunt. If land wins the run-off vote, this is the kind of land most likely to be created. Factoring this in, there are more enchantments that have been played in competitive Standard than lands.

A sizable chunk of both categories have only seen minimal play, appearing in a very small percentage of the overall Top 16 decks since rotation. Only eleven enchantments and eight utility lands have appeared in 3% or more. Here are the top five of each. 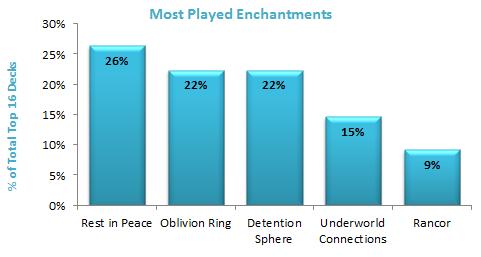 Enchantment won the vote, and a surefire way to see play in competitive Standard seems to be to hose one or more deck strategies or serve as catchall removal. Auras are generally not played due to the unappealing risk of a two-for-one, but building in some kind of resiliency to removal could do the trick. 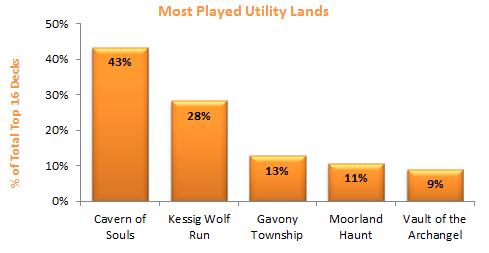 As for what could have been, a utility land needs to change or outright win the game through an impressive activated ability to see play. Cards like Kessig Wolf Run are so valuable because they allow you to play a pretty powerful combat trick stapled to a land. Nephalia Drownyard, in 6% of Top 16 decks, has been the sole win condition in some fairly successful strategies.

What Do You Think? Impact

Thatâs it for this weekâs article on SCG Open: Kansas City. Join me next week for more Standard tournament results, metagame review, and Magic analysis. Thanks for reading!