Here are the Top 16 decks from StarCityGames Open: DC. I determined the average mana costs of the main decks and prices in dollars and Magic Online tickets by importing each decklist into the Decked Builder app. Dollars are from CoolStuffInc.com, and tickets are from MTGOTraders.com. The graphs display the strategies, colors, and most-played archetypes of the Top 16. 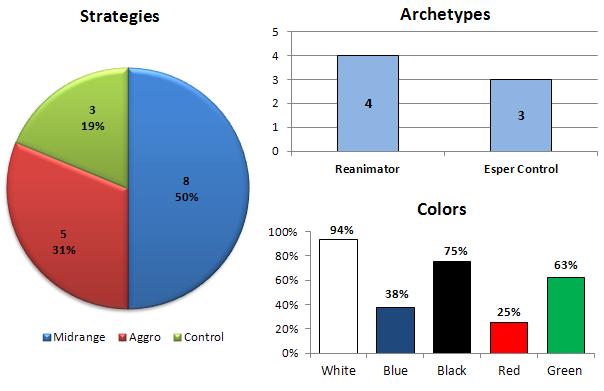 The following charts and graphs display the most-played creatures in the Top 16 decks of the tournament. 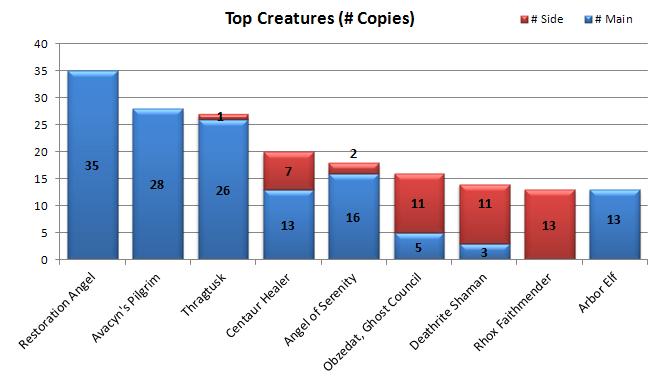 White and black were the two most-played colors in the Top 16 and were usually played together, which made Obzedat, Ghost Council a popular creature in DC, appearing in nine decks.

Where might you find these creatures and need a plan to deal with them? Here are the decks they appeared in this week:

The following charts and graphs display the most-played removal spells in the Top 16. 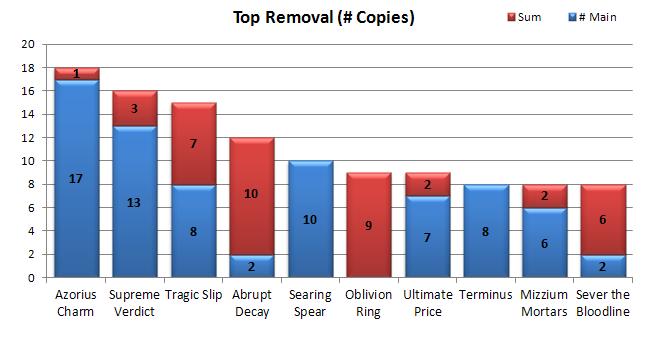 Esper-based decks propelled Azorius Charm, Supreme Verdict, and Ultimate Price onto this list. Esper and Junk decks made Tragic Slip a popular choice as well. Overall, 40% of the removal spells in the DC Top 16 were in a sideboard.

When should you look out for these removal spells and potentially play around them? Here are the decks they appeared in this week:

Here are the cards that have made their first Top 16 appearances at SCG: DC. Are they the next hot tech? You be the judge.

The following graphs track the deck archetypes with the most Top 16 finishes at major Standard tournaments. They include results from not only SCG: Indy but also Grand Prix: Verona and Grand Prix: Rio. 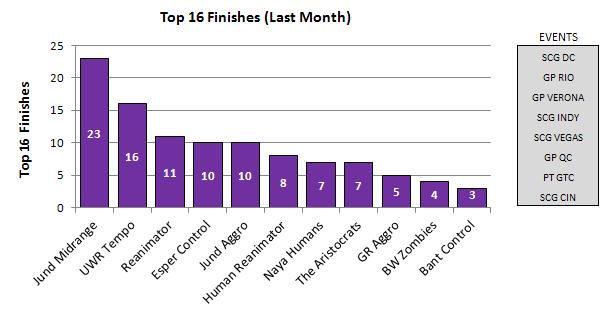 Jund Midrange is still the big bad of the last month, but Reanimator is gaining fast with three Top 16 finishes at SCG: Indy and four in DC. Esper Control is also surging with two at Indy and three in DC.

This Standard Season (since rotation) 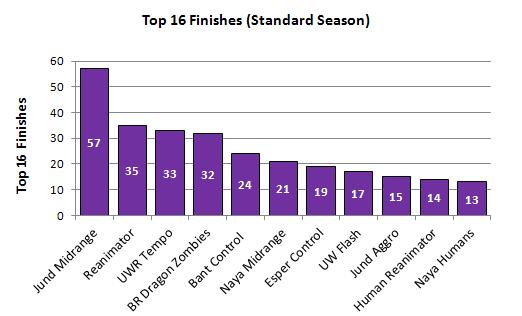 Letâs take a closer look at a deck that is coming on strong in the Standard metagame. Here are the cards played in 50% or more of the Reanimator Top 16 decks over the past month:

By the Numbers: Competitive Reprints

Of the three hundred sixty-four cards that have seen play in a Top 16 deck this Standard season, seventy-two are reprints. This excludes cards that have only been reprinted in special products such as Duel Decks and From the Vault: Legends. A good chunk of these reprints, twenty-three in total, are lands: basics, shock lands, M10 dual lands, Evolving Wilds, Reliquary Tower, and Ghost Quarter.

Here are the most-played nonland reprints since rotation: 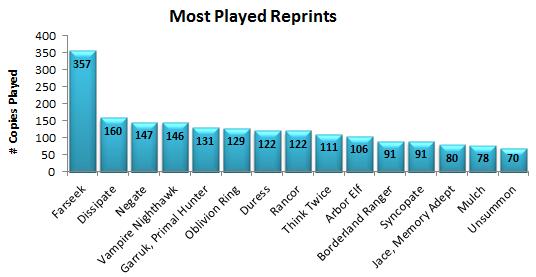 Here are the cards that have appeared in the most sets and expansions: 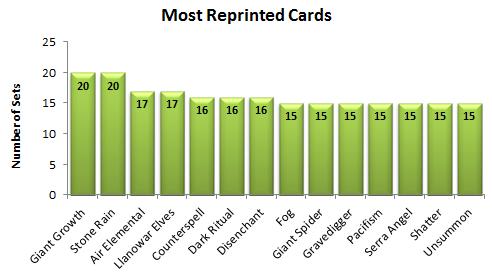 Unsummon is the only overlapping card between the two graphs. Giant Growth and Fog have both been played in Top 16 decks this season, but only a couple copies each. Birds of Paradise has been printed fourteen times, and a fifteenth showing would most likely land it on both graphs.

What Do You Think? M14 Reprints

Thatâs it for this weekâs article on SCG Open: Washington DC. Join me next week for more Standard tournament results, metagame review, and Magic analysis. Thanks for reading!