In my last article I talked about the Duel Decks series, particularly the awesome masculinity of pirates. The feedback on that deck have been very good, with a lot of people contacting me to let me know precisely how much fun they've been having. This week I hope to placate those of you who are fans of the stealthier element, Ninjas.

In the interest of full disclosure I find myself firmly entrenched in the pirate camp, but I can see how ninjas might appeal to some players. Ninjas are stealth personified, preferring crafty schemes over brute force, cannons and lusty wenches. That is fine however it takes a completely different mindset to accomplish.

The best way I could find to prepare myself was a combination of watching Ninja Assassin trailers and perusing the original decklist that WotC put forth. Here is the list originally previewed:

As is the problem with most EDH decks we need to come up with a General. Notice that the deck is four colors... again. Pirates were four to five colors by necessity but I don't think we need to go four colors with ninjas. Green is barely in the original deck, only showing up in the form of a single forest and an Argothian Boars. While I do respect Argothian Boars I think we could easily find an in-color card to serve the same purpose (which if you read the original article was simply subterfuge!) 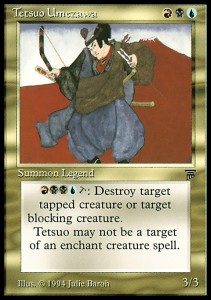 Having pared the deck down to a mere three colors we now need to find a suitable general. As is the case with Pirates, functionality is really less important than flavor. Though there are a few tempting legends at our disposal, Sol'Kanar the Swamp King for example, I think the ideal legend is Tetsuo Umezawa. Tetsuo has a useful ability, fills the flavor of the general and most importantly the art shows a person with a samurai sword! Though Tetsuo is now a human archer as a creature type I feel he's still a ninja at heart.

Having selected our general we need to fix a few problems with the main deck. Again "Un" cards are fun to have but we want to abide by the rules of EDH which means they need to go. There are two Ass Whuppin! that need to go and a single copy of Kill! Destroy! that we need to cut as well. Compared to pirates there are considerably fewer un-cards that cause us headaches.

Unfortunately there are a few other cards that need to disappear to preserve format legality. Walker of Secret Ways, Throat Slitter, Skullsnatcher, Okiba-Gang Shinobi, Ninja of the Deep Hours, and Mistblade Shinobi all have multiple copies which need to be dealt with. Additionally, though I love the flavor of five copies of Sudden Death (5 copies!) we need to go ahead and make that a single copy. This almost gives us a legal deck for the format but there's another problem to be dealt with.

There are currently cards in the deck which are not allowed. With Tetsuo only being three colors any green cards need to be removed as well. With that we bid adieu to Argothian Swine who violates the color restrictions. The single Forest is not a colored card but it also needs to be removed from the deck since it technically has the green mana symbol on the card.

A mere fifteen cards have been removed! That was me being sarcastic, ninjas have been much more difficult to work with than pirates, though maybe it's their mystical ways. With fifteen cards having been removed and only a single card having been added we have a total of forty-six cards giving a mighty big fifty-four spots to fill. That number might be a bit misleading though, since there are also lands to be added. Since lands are the least fun aspect of the deck (usually) we turn to the rest of the deck first.

Assuming that we want 40 lands we get to add thirty-seven non-land cards. Being forced to cut so many creatures causes things to be a little light on the offensive. Though I know that ninjas received a fair amount of coverage during Kamigawa block, the number of creatures with the actual type of ninja is surprisingly lacking. I've decided to offset that void of ninjas with an assassin subtheme. Assassins also thrive on night and trickery and if recent major motion pictures are any indication then they actually go hand in hand. 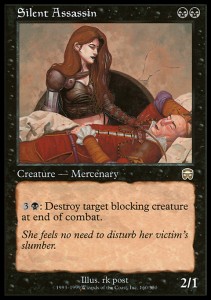 Fortunately there are a great number of assassins who are also in color. Royal Assassin, Garza's Assassin, Suq'Ata Assassin, Nightshade Assassin, Stalking Assassin and Silent Assassin all have comparable abilities while keeping scurvy pirates at bay. Additionally, Nekrataal and Orzhov Euthanist are assassins with great enter the battlefield abilities. Murderous Redcap is certainly less reliable than the other two "enter the battlefield" assassins, yet has a more flexible ability. Finally, there are two legendary assassins with very relevant abilities in the form of Kiku, Night's Flower and Thraximundar.

There are a few non-assassins who will be entering the deck. Nezumi Ronin has a fearsome ninja-esque look and so I've added him to the mix. Scarblade Elite certainly plays well with the subtheme and as such is absolutely necessary. Finally, Shadow Guildmage gives us some much needed combat tricks since we are usually happy to have some ninjas in hand. Ok, so Shadow Guildmage isn't the last creature added. Zodiac Pig gives us an in color alternative to Argothian Swine. Trickery is still alive!

In addition to the large number of creatures added to the deck I've tossed in some great flavorful cards. Assassin's Blade and Doom Blade both get the feel of a great effective killing stroke. There are also a few pieces of equipment that should be in the deck. Tatsumasa, the Dragon's Fang is a sword! How can you not have a sword in a ninja deck? Same goes for Umezawa's Jitte, a ninja staple. Now that we've appropriately armed our ninja clan we need a place for them to dwell.

Lands are a big issue for every deck and ours is no exception. Having cut the single forest we drop to twenty-three lands, meaning there is room for seventeen more. Most of the great flavorful lands have already been added, but I have found a few more that are both effective and full of flavor. 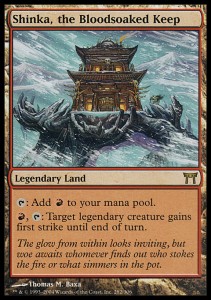 Shizo, Death's Storehouse and Shinka, the Bloodsoaked Keep help give our legends various useful abilities while staying in the whole Oriental theme. Shizo makes ninjas particularly powerful since it enables a great many creatures to attack unblocked. Urborg, Tomb of Yawgmoth also ties in with the whole death and darkness theme with the added benefit of smoothing out any swamp issues. River of Tears smoothes mana issues while providing some art that feels right at home with what we are doing.

The final three non-basic lands being added are of a hiding/treachery theme, Temple of the False God, Ancient Tomb, and City of Traitors. All three lands let us ramp up mana while representing various ninja aspects rather effectively. In order to round out the mana base and finish the deck up we add four Islands, five Mountains and one swamp. It's worth noting that the reason I went light on the swamp is partially due to the extra non-basic lands tapping for black and partially due to Urborg ideally making the extra swamps irrelevant.

So let's take a look at our finalized list:

Despite my best efforts the ninja deck is considerably more efficient than the pirates deck. I can't say it's too much of a surprise since ninjas were a legitimately supported tribal mechanic, but with any luck we might see some more love for pirates in the future. I felt like it would be a little unfair, but if needed one could add some changeling cards to either deck to play off both themes and subthemes.

That's it for our exploration of Wizards' April Fool's joke. I hope you have fun playing these decks and I encourage you to post your results in the comments section! I want you to tell me who you think should win the ultimate battle: Pirates vs. Ninjas!

Until the next time this is Benjamin McDole giving you a hundred reasons to play Magic!