Sometimes it feels like Magic sets come and go a little too quickly. Last year was no exception. It seemed like we just jumped from one set to the next with hardly any chance to breathe or take in the world we were just on. This was especially the case with Kaldheim. It was my personal favorite set of last year, as someone who both really loves Norse mythology and the heavy metal aesthetic that Wizards leaned into with the set.

With so little time on the plane before moving onto the next set, though, I didn't get to cover nearly as many commanders as I wanted. Kaldheim was like a goldmine for me, a place where I could deep dive and talk about the rich lore and the various mythological allusions. Today, I want to take a moment and go back to this time last year when we first saw Koll, the Forgemaster.

Koll was one of the cards that had me losing it with how much I loved the card and character when he was first revealed. Dwarves on Kaldheim are known for their skill and craftsmanship. Unlike most dwarves, however, Koll had the ability to craft tyrite, the mystical sap of the World Tree. This was because his hand turned into tyrite itself when he touched some in a battle between Halvar and Sarulf, who had attacked Koll initially. Grateful to Halvar for saving his life, he crafted the Sword of the Realms for the god before Tibalt, disguised as Valki, killed Koll and stole the sword from him.

This simple story was told in what was actually my favorite card in the entire set: The Trickster-God's Heist.

This simple card tells a tale in one card that basically parallels a famous tale of Norse myth. The myth starts with Loki, the trickster god, pulling a prank on the goddess Sif by cutting her long, beautiful hair. Enraged, she lashes out at Loki, who promises to seek dwarven craftsmen to create her new golden hair. He then goes to the sons of Ivaldi who craft hair for Sif but also make Skidbladnir - Freyr's ship - and Gungnir - Odin's Spear. Loki, with his mischievous cunning, believes that he can manage to do more. So, he goes to the dwarven brothers Brokkr and Eitri. 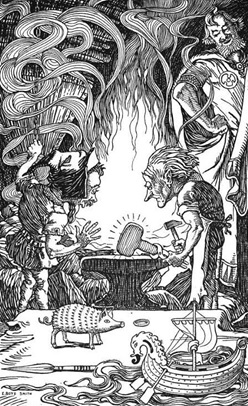 He makes a bet with the dwarves that they would not be able to make items that equal the quality of the ones that the sons of Ivaldi made. If they could, then they could claim Loki's head. The dwarves got to work and began crafting more gifts for the Aesir gods. They started with Freyr's boar Gullinbursti and the ring Draupnir for Odin - which is represented in Magic as Replicating Ring, a ring that would drip eight new copies of it every ninth night. Finally, they set to work on a mighty hammer Mjolnir for Thor.

As the dwarves worked, Loki made efforts to attempt to hinder their efforts in making these items. He did this by turning into a fly so as to distract them and cause them to mess up. His attempts the first two times failed, but with Mjolnir, he bit one of the brothers - Brokkr - on the eye, causing blood to be drawn and for Brokkr to take a moment and wipe the blood away. This inadvertently caused the hammer's handle to be short - the only flaw in the weapon. This did not deter the gods, however, who determined that the dwarves won the bet. Loki got the best of them in the end, however, when he declared they did not lay claim to his neck, which they would need to injure to get his head, and thus he survived.

The Trickster-God's Heist is a perfect allusion to this, showing how a dwarf was crafting a mighty tool for a god and the involvement of Kaldheim's Loki parallel. Here, the ending is different, with the dwarf perishing and the trickster god taking the weapon for himself. But the story is unmistakably the tale of the Treasures of the Gods, and I adore it. It gave me a lot more respect and love for Koll as a character - brief as his time in the story may be - and his excellent card as well. As such, I couldn't help but make a deck around him.

Koll caught my eye not only as a great character parallel to Norse myth, but also as a wonderfully fresh new take on an equipment commander. Most commanders that tend to utilize equipment tend to end up somewhat boring or do the same thing - often relying on attacking or voltroning. Koll seemed to do something a little different, allowing you to keep getting creatures back if they're equipped while also powering up your equipped tokens. This seems great for keeping your army going and encourages going wide and using a variety of creatures and abilities.

Now, make no mistake - Koll is still an equipment commander first and foremost. That means all your staples for those decks are here. Stoneforge Mystic, Puresteel Paladin, Kemba, Kha Regent - they're all here. And so are the best kinds of equipment you can imagine, though you can make some budgetary swaps with plenty of other ones not in this deck. Many come with tokens built in, which work excellently with Koll's second ability. If all else fails, you can re-equip these cards to your other creatures and pump them up.

Koll's ability makes him great for come-into-play abilities. The thing is, though, the best way to utilize Koll here is actually with a little bit of combo shenaniganry. You see, having Goblin Bombardment and Impact Tremors can give you a ridiculous number of damage dealing from repeatedly getting creatures onto the battlefield or sacrificing them. This works especially well thanks to the card Shuko, which has an equip cost of zero, but can also be done with the help of Puresteel Paladin or Sigarda's Aid.

With these, you can repeatedly equip creatures like Memnite, Ornithopter, or Rograkh and sacrifice them. When you sacrifice them, they come back to your hand thanks to Koll's ability and you can do it over and over again, causing tons of damage and taking down your opponents' life totals. This also works with Impulsive Pilferer thanks to the treasure token it makes (you can also use Dockside Extortionist if you have access to it and feel particularly mean). Finally, even though it's more limited to the amount of mana you have available, Mogg Fanatic can also dish out some serious beats without the need for having Goblin Bombardment on the board.

If you need another combo too, there's always the Godo and Helm of the Host combo. This combo makes a new Godo at the beginning of your combat phase, attacks, and makes another combat phase. When this happens, you get to make another Godo token from Helm of the Host, and the cycle repeats. With any luck, you should be able to take out your opponents, and any that are left will likely fall if you get another chance to untap.

Even without these combo finishes, however, there's still tons of ways to just beat face and have a good time. I love the options and foresee that Koll will have plenty of utility in the years to come as more excellent cards get printed. The brand new Spirited Companion from Kamigawa: Neon Dynasty is probably right at home here, for example, as a card you can repeatedly cycle through to draw cards in a pinch. The Forgemaster rules, and should make a fine fun time at your next Commander night. Give him a try, and just be wary of the tricksters amongst your group!