In September, Wizards of the Coast introduced a new regime for ranking players and giving invites to Pro Tours. At that point, we had no idea how the new system would affect the makeup of Pro Tours. While Wizards had announced the removal of invites from the Top 16 of Grands Prix, nothing had been said about the Top 50 of Pro Tours, and they had not announced the disbanding of the Pro Players Club in its current form. Wizards did, however, give us access to Planeswalker Points data from the previous two seasons.

With just that data, I did some initial analysis into how Pro Tours Nagoya and Philadelphia would have been affectedâand it turned out not to have much of an effect. There were some notable players who would not have been invited (Toshiyuki Kadooka, second-place in Nagoya, and Jesse Hampton, Top 8 in Philadelphia, for example). To make up for this, a number of well-known players such as Edgar Flores and Caleb Durward, primarily stars of third-party tournament series, would have been invited to those events. What I found encouraging was that English non-pro and PTQ regular Thomas Duignan was also in the Top 100.

Now we have more details from Wizards on the system. Pro Tour Top 50s no longer qualify, the Pro Players Club is going away, and most importantly, we can see the effect of player behavior now that Planeswalker Points are public.

For Pro Tour: Dark Ascension, we are in a transitional period. The old system of Grand Prix Top 16 invites, Pro Tour Top 50 invites, and the Pro Players Club still appliesâalong with Planeswalker Points. There were also two Pro Toursâwhereas next year, the World Championships won't count toward PWPs. Fortunately, Wizards has published a PWP list without the World Championships, so we can look at that list while ignoring any invites that are going away in order to see how the system is likely to work for subsequent Pro Tours. For this article, I have taken the PWP rankings from after the World Championships, which means they include all the GPs in the season. There are a few remaining events, but most of them have a Ã3 multiplier or lower, so they shouldn't have much of an effect on the results.

How has player behavior changed the PWP race? Wizards justified removing GP invites by giving them a Ã8 multiplier, so those doing well at GPs will get the most points. How well does this work? Since the results of all the GPs, PTs, and SCG Opens are public, we can see how these contributed to players' points. We cannot see the sources of other events, although some educated guesses can be made.

The number-one player in PWPs is Alex Bertoncini, SCG Open poster-boy. He has played in a PT this season, and he made Day 2 in two GPsâin addition to finishing in the Top 8 of two of the twelve Opens in which he played. That's a record no one can argue with. It's worth noting, however, that only 25% of his points this season came from the PT and GPs, with another 25% coming from Opens. At third and sixth places respectively, PWP grinders Melissa DeTora and James Searles have attended six of the seven GPs in this season. While Melissa did make the Top 8 of GP Santiago, it was one of only two Day 2 finishes, and James's best finish was a Day 2 at GP: Brisbane. These GP results made up 48% and 45% of their PWPs, respectively. We have to look as far as eighth place to find a player with more than 50% of his PWPs from Pro eventsâHall-of-Famer Shuuhei Nakamura, whose PT Top 50 and four Top 17 GP finishes contributed to 88% of his PWPs. Only seventeen of the Top 100 players have more than half of their points from Ã8 and Ã12 events.

Looking at the other players in the Top 5, however, it is less clear where their points came from. Thomas Johnson has 21% of his points from FNM, but he has played no GPs, PTs, or SCG Opens this season. Carlos RomÃ£o was probably helped by his eighteenth-place Nationals finishâthe only Nationals to be in this seasonâbut he also hasn't competed in anything else notable, and along with PWP-second-place Hemant Patel, is not among the Top 500 FNM scorers. Hemant has played in one GP (missing Day 2), but no other published events. This is a common theme among the PWP Top 100: a lot of points, but not from big events.

This chart shows everyone in the Top 100 and how many of their points were from pro-level events (GPs and PTs): 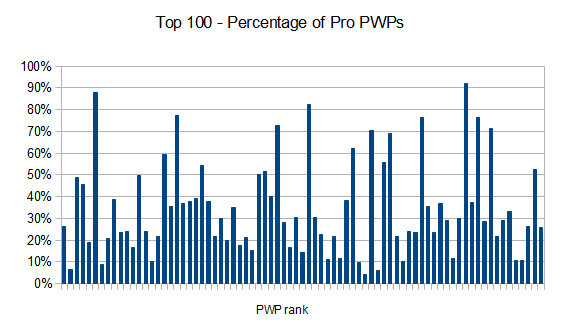 Obviously, among the Top 100, there are a number of players whom no one would begrudge a place on the Pro Tour. Shuuhei, of course, but there are other players who have scored well: Sam Black, PT winner Samuele Estratti, GP winner Martin Juza, and Worlds and GP runner-up Richard Bland. However, there are seven players for whom over a third of his or her points have been earned at FNM. Over 40 of the Top 100 didn't make Day 2 of any pro events this season. You may say, âBut they have a reasonable overall win rate, even if they didn't do well at a specific event.â Looking at GP results (which I have, though sadly, I don't have details from any other events they may have played), while there are 60% and 70%âand even an 80%âwin rate among the Top 100, there are also many 50%, 40%âand one 33%âresults.

We can also take a look at those people who have invites under the old system to see how many of those highly-placed players in high-multiplier events have managed to earn a PWP invite. The Top 50 of PT: Philadelphia have invites under the old system. A full thirty-six of those players didn't manage to make the Top 100 PWPs and wouldn't be invited under the new system. We can compare this to the numbers for the previous two PWP seasons to show the effect of player behavior on results. Sixteen Nagoya Top 50 players would have lost invites to PT: Philly, and twenty-one Paris Top 50 players for Nagoya. Good Pro Tour results are clearly having less of an effect on PWP finish than they used to. Indeed, Jesse Hampton, Max Sjoblom, and Josh Utter-Leyton all fall short of the Top 100 listâall of whom were in the Top 8 of PT Philly. In contrast, none of the Top 8 from Nagoya failed to make the Top 100 PWPs in that season, and only Shintaro Ishimura from Paris's Top 8 failed to be in the Top 100 PWPs for Nagoya. It is likely that this is because the Paris GP overlapped with the Pro Tour, and Ishimura, having made the Top 8, did not play in the GP.

For GP Top 16 players, the scene is even bleaker. Forty-five of the fifty-six Top 8 slots were taken by players who aren't in the Top 100 PWPs and wouldn't now be invited. Ninety of the one hundred eight Top 16s who are invited under the current system are out. Four players even made multiple Top 16s without earning enough PWPs. Compared to the previous seasons, that's 80% of the GP qualifiers losing invitesâcompared to 55% for PT: Nagoya and PT: Philadelphia. It's a good job that Wizards has announced that GP winners will receive an invite (a change to the original policy)âonly two of the seven GP winners have a PWP-based invite for PT: Dark Ascension.

So far, I've compared players who've earned good finishes (which previously were rewarded with invites) with those who have accrued the most PWPs this season. It seems now that players know about PWPs, their behavior has shifted so that good finishes at big events are not rewarded as highly as they used to be (relatively speaking). I don't have any data about where the majority of the PWPs for the Top 100 have come from, but it is not a stretch to say that many have come from the Ã5 multiplier of PTQs and GP and PT side events. It may be good that the PT is now accessible to more playersâas long as they are willing to play a lotâbut is this true for all players? One thing that many people are worried about is the geographical distribution of PWP opportunities. 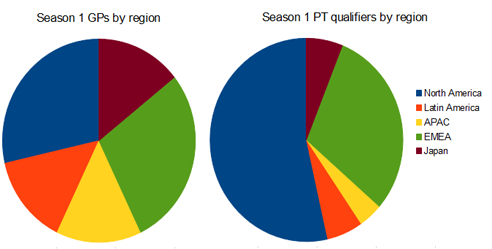 For this PWP period, fifty-three of the Top 100 were from the North America region, thirty from Europe, and fewer than ten from each of the other regions. This is not surprising when you compare it with the number of GPs in the second graph. The US also has the SCG Open series, which had six legs (twelve events) in this PWP season.

Wizards has already announced the distribution of GPs for the whole of next year, so we can use this to make some predictions about the availability of PWPs in each region. These three graphs show the GP distribution in the PWP seasons for the subsequent three Pro Tours. The weighting toward the US dramatically increases:

This GP distribution is justified on the basis of player distribution in the various regions, which at first seems reasonable. However, when you consider just qualification based on PWPs, the relevant figure is how many GPs one person can attend, not how many players there are for each GP. It seems clear that it will be very hard for non-US players to qualify without traveling outside their regions. On top of the GP distribution, it's also worth noting that the SCG Open series is rising from six weekends to twelve next season, and as of yet, there is nothing similar in other regions.

Looking beyond Pro Tour invites, PWPs are also used for byes at GPs. PWPs issue a fixed number of byes, whereas the Elo system issued byes based on a fixed score. How have PWPs changed the number of byes given out? With PWPs, three hundred players each receive three byes, two thousand players receive two byes, and fifteen thousand players receive a single bye. Comparing this to Elo, the three byes cutoff was at a 2050 rating, with (currently) one hundred twenty-nine players with that score. Two byes was at the 1950 rating under Elo (twelve hundred eighty-five players), and one bye was at a rating of 1850 Elo (ninety-one hundred nineteen players). Given that Elo ratings include players who do not play regularly anymore, whereas PWPs byes are only given to current players, many of whom play GPs, I anticipate at least twice as many players receiving byes at any given GP, particularly in the US. It's unlikely that any players will complain about this, but it might make some of the early rounds a little strange with so many byes, and it certainly devalues the prestige of having byes.

It seems clear from this season that PWPs in their current form are not rewarding good play in high-level events more than they reward just playing in many events. For PT: Dark Ascension, this may not have a large effect, since all of the old qualification methods still apply. For PT: Barcelona, however, only the fact that 2011 Players' Club benefits are still being honored keeps the majority of the top players qualified. If Wizards of the Coast wishes the Pro Tour to be for the top players of a skilled game, they are going to have to make the promised announcement of the replacement very compelling. Otherwise, I worry that it will be relegated to the US grinders and the odd, lucky players from other regions, leaving many of us other Magic players with nothing to aspire to.