I was on the verge of quitting magic around two years ago and then I was brought into the glory that is EDH. As much as I enjoy EDH sometimes it can be hard to get a group of people together for a proper game and that's where other alternative formats can enter into the equation. In the upcoming weeks I'll be writing about some more fun formats that you might not see all the time. Today I'd like to start with rainbow stairwell. Just like with EDH today will be a primer for the format with a nice sample list to kick things off.

Rainbow stairwell has a less codified system of rules so we'll discuss the different variants but there are a few consistent elements. Your deck should be sixty cards. Note that this isn't like the common restriction where sixty is a minimum amount, this is where sixty cards is the firm number you need to have a legal deck. No more, no less.

Let's get to precisely why the format is rainbow and stairwell. Each deck needs to be all five colors and contain artifacts. Additionally, each deck needs to have one card of converted mana cost from one to six inclusive. So an example of the green portion of the âstairwellâ could be:

1 Call of the Herd

1 Kodama of the North Tree

Notice that each mana cost from one to six is present and there's no restriction on the number of mana symbols themselves. A common question is, "Does the green card with converted mana cost two need to literally have two green mana symbols?" That is not the case. 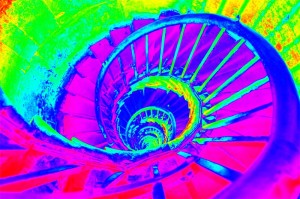 Another frequently occurring problem is the question of gold cards. There are conflicting schools of thought on gold cards. Some groups favor allowing gold cards to count as one of the gold colors. For example a Sharuum the Hegemon could count as a players black, blue, or white six mana cost card. With that rule in place it can be fairly difficult to keep track of the various costs and colors and it also causes a large question about hybrid cards. The group that I play with has a simple solution to hybrid cards and gold cards.

Gold cards are not allowed and hybrid cards are fine but they need to count as one of the two colors. Under this system something like Gaddock Teeg is not allowed, a card like Creakwood Liege is legal, but it needs to count as either your green or black four converted mana cost creature. I think this system simplifies the possible problems which can happen with the rules above.

Another mana cost issue is that of X-spells. A spell with X in the mana cost has value X is zero in all zones other than the stack. Once the spell is one the stack then X is whatever has been paid for it. In order to avoid this ambiguity X-spells are also banned. Additionally, split cards are banned to avoid the great difficulties already presented.

The advent of colored artifacts also adds a new wrinkle to deck building. It's not difficult once we recall that a card is whatever colors are in the upper right hand corner (with a few small exceptions). So Sanctum Gargoyle is perfectly legal! Just make sure you count him as a white card and not an artifact and you won't have any trouble.

With the main problems in constructing the main deck having been addressed it's time to discuss the mana base. The original iteration of the format called for two of each dual land and for decks to be fifty-six cards. That's just crazy talk. First of all it is entirely too cost prohibitive, especially for newer players. Second of all, it is a little counter intuitive to be playing a singleton format and allow two of each land type.

There is one suggestion which calls for three of each basic land type, one of a "cycle" of lands of your choice (i.e. the Onslaught fetch lands), and then four other lands of your choosing. Again this seems to go against the idea of the format, forcing people to run basic lands they don't want to run seems difficult and discussions on what constitutes a cycle of lands can get tricky. Even worse lands such as Library of Alexandria and Mishra's Workshop can again push the format out of the price range of most players.

I would like to propose a more modest solution instead. I see no reason the EDH land system can't be used with a minor modification. If a land has an activated ability that does not produce mana then it cannot be used. This rids the problem of the majority of the heavy price tag lands. Gone are Library, Workshop, Bazaar and even Diamond Valley. The Tabernacle at Pendrell Vale is still around, but hey, nobody's perfect! It's also worth noting that Urborg, Tomb of Yawgmoth is also still legal since it has a static ability and not an activated ability.

There are a few periphery rules. Cards that target nonbasic lands are typically sort of taboo. Magus of the Moon, Blood Moon, etc are usually frowned on, with some rules systems banning them outright. I personally have no objections to them and I run a lot of nonbasics. And I do mean a lot! So to each their own!

[/caption]Rainbow Stairwell offers a fun alternative to your regular formats and can be just as popular as EDH. Additionally, it's more difficult to "break" the format since not every tutor and combo can be packed into the same deck. I would recommend giving Rainbow Stairwell a shot and next week I'll be putting together an interesting little stairwell concoction and outlining another rogue format which has really caught on at Armada, Pack Wars!

Until then this is Benjamin McDole (usually) giving you a hundred reasons to play magic!