My story starts three years ago. I had incredibly mild success on the Open series and Dig Through Time and Treasure Cruise had started making their way into Legacy. At a tournament in Columbus, I was set with another brew of my own creation for Legacy. I was ready to show everyone that I could be relevant and I could build a deck.

That deck was terrible and it didnât take many matches with some friends to figure it out. Joe Bernal told me to just play Stoneforge Mystic. I had a long and contrived love affair with the card and had a ton of success playing it. I was sold. Fast forward to 10pm the next day and I was attacking Kazu Negri for lethal in the finals. I felt content doing well until a conversation I had with Patrick Sullivan after the tournament.

âSo are you going to try for the Playerâs Championship now?â

The real answer was âno, Iâm not good enough to do thatâ. I just got really lucky all weekend and everything seemed to pan out. That conversation gave me confidence. I just demolished an Open after all. I didnât lose a single match and 2-0ed each opponent in Top 8. Maybe I could perform after all.

I have long struggled with my confidence in this game. Things are easy when youâre good at the game and youâre a likeable person. Iâm certainly not the easiest person to deal with. I can be rude, crass, hard headed, and obnoxious. Friends you surround yourself with attribute to this. I constantly surrounded myself with people who would belittle and attack me, who pointed out my every flaw and mistake along the way. I wasnât strong enough to deal with it. I couldnât separate myself from those people and allowed them to hurt me and influence my feelings.

I made it my mission to compete in the 2015 SCG Playerâs Championship. While I loved competing and had a desire to do more; my attempt to qualify really lit a fire under me. I was ready to buckle down, do the work I had to do, and try to perform well in every event.

And things started off well. The first half of 2015 I was able to Top 8 several opens and miss out on Top 8 in a few others. Despite this, I always seemed to be outpaced by players who were attending IQs. It didnât matter that I traveled to an Open when other players were able to rest their laurels at home and play in a couple IQs. I kept getting pushed out of Top 16 and my goal felt further and further away.

At this stage it felt hopeless. Every Open was worse than the one before. I was irritable and depressed. Traveling had become a chore. A drain both financially and emotionally. I hated what I was doing and felt miserable doing so. I felt committed though. I felt like I had to trudge along. Eventually I committed to traveling to every IQ that I could. I lived in an area where this meant an easy four IQs a week. Every single week. For 4 months straight. The drain was real.

At the end of this cycle I was able to qualify. Relevancy attained. Everyone knew who I was and players actively were rooting for me to do well. The messages of support and encouragement along the way meant a lot. But it wasnât enough, I was still empty.

I was so burned out I didnât put much effort into preparing; and, when I got there, I knew I made a mistake. I went through all this trouble and headaches; late nights and close misses; and all for what? To show up to something I didnât have my heart in? I had given up before I got in.

And it showed. I got demolished in the tournament and proved I didnât belong and that I didnât deserve what I had. But I was in a cycle. My cries of quitting and removing myself from the stress fell on my own deaf ears. I was locked in to going to every event.

So, the next year I rehashed a lot of the same poor habits. Sure, I went to less IQs, but I trudged to every event with little to no work put in because I just didnât care. I had this constant feeling I assumed was just that fire I lit the last year; but, it wasnât a fire. It was my depression eating away at me.

What I wanted was recognition. That somehow players messaging me on Facebook or commenting on my articles validated me as a person. I played off the wall decks and traveled to events because it meant there was a chance I spike or get put on camera. Once that happens more people could recognize me and then the hole in my soul will be filled.

I longed for an escape. I suffered from feelings of inadequacy and left myself in a poor position socially, emotionally, and my home life was a mess. I was in a toxic relationship during this time that I allowed to fester. I wasnât happy; and, instead of working on fixing things, I ran away. If Iâm at a tournament with friends then things won't be so bad. Maybe Iâll even spike an event again. Having money and prestige will solve those issues Iâm having at home. 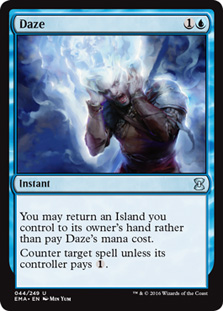 But it was all for naught. I couldnât solve my problems by running away. I didnât care about Magic anymore. I spent the year running to tournaments and trying to find my happiness at the bottom of a match slip. But win or lose it didnât matter. More recently, my lack of empathy and failure to manage my happiness cost me one of my best friends. While heâs not coming back, I still wonder why I donât care more about why what I did or even begin to feel bad about it.

I only really realized recently that my happiness has to come from me. The last several months Iâve trimmed out most of the toxic people in my life. Iâve started working on my happiness, and since Iâve disconnected it from Magic Iâve had a better time playing. I traveled to DC with a friend to play Legacy this weekend and, win or lose, it didnât matter to me. I was there to just have fun.

Fortunately, I was able to do so. I was concerned for a bit I wouldnât, but I didnât seem to mind. I was there to spend a weekend away. It felt different. There was no attachment to how I performed.

I got to experience a Magic tournament as someone who just showed up to play. Viewing the game from the non spike side made me feel differently. Itâs easy to forget Magic can be just a hobby. In general, we like to think of those who donât play competitively as casuals; but, after this weekend, Iâm not so sure. It felt like there was a middle ground that I got to participate in. I actually kind of enjoyed it. I got to decide when I was playing and what I wanted to play or where and it made everything more enjoyable.

Iâm at a stage in my life right now where Iâm making big changes. Magic is less of a focus than ever. Iâm happy to be writing articles and being able to share my thoughts with the readers and Iâll be happy to pick and choose my events from here on out. Iâm working on my own happiness and trying to be a better person. Three months ago I started changing things. I started working out again. Iâve lost 10 pounds and am now starting to put muscle back on. Iâve started eating better and most importantly I stopped surrounding myself with toxic people.

This is important here.

Cut the toxic people out. When your friend does nothing but insult your play and deck choices and offers nothing to you but beatings, thatâs toxic. When the people you choose to surround yourself with keep you down instead of supporting or helping you out, thatâs toxic. It bogs you down and keeps you there. We live in a day and age where we are so connected to everyone that itâs easy to spend a massive amount of time communicating with anyone you know. And because itâs so easy to do that it might be hard to cut back. But itâs important for your health.

You have to make the changes yourself. No one is going to come along and fix everything for you. Thereâs no 30 minute time slot for everything to get resolved in. Thereâs a reason shows like Master of None and Bojack Horseman resonate with people so much. Life doesnât give you much room. So you can either sit around and hope that youâll stop harping on that one situation or person or you can start working toward something new. Itâs not going to be fixed in a day and itâs going to take time.

Iâve started making great changes in my life and Iâm happier for it. Hopefully, Magic will light a new fire for me because as Iâve said before:

âI just want to be relevantâ