Login
0 Item
Advanced Search
Sign In
Create Account
From one perspective, Gideon's decision to participate in the Trials on Amonkhet makes some sense. It satisfies both his need for a leader to followâ.â.â.â and his deeper, less acknowledged need to see the truth for his own eyes, to put his faith to the test. That's the Watsonian view that I dug into last time, the idea that Gideon, treated as a real person with a coherent inner psychology, would make the decision to run the trials. The Doylist explanation, the out of world analysis, is that Gideon doing the trials serves a narrative purpose for the Creative Team of having a Gatewatch character witness the reality of Amonkhet first hand, in the form of the brutal Trial of Ambition.

Here the Watsonian and Doylist approaches to reading seem to work together. Out of world, there's a purpose served by this character choice; in-world, we can understand Gideon's motivations. Butâ.â.â.â what if those two models are in conflict?

What if Gideon's arc doesn't make as much sense as it appears?

Last time I talked about Gideon as he first appeared in The Purifying Fire: strong, confident, and assured â the way we see him now â but also cautious, not prone to getting involved in fights that don't concern him, not really a crusader or paladin. Gideon is cool and collected, more interested in reasoning with Chandra than dragging her before Walbert in chains.

Gideon elsewhere has beenâ.â.â.â not that. I think probably the furthest departure from TPF! Gideon is the one we see in Homesick, where he comes off, somewhat bizarrely, as a boisterous jock, which is a far cry from his reserved and somewhat aloof persona in TPF, and his tortured hero shtick in some of the other stories we'll look at, but there's a pretty wide bell curve of Gideons throughout Magic's storyline, and the Gideon that marches excitedly off with Oketra to do a bunch of trials to glorify the plane-enslaving millennia-old dragon that he's ostensibly there to fightâ.â.â.â well, let's just say that even as I defended this Gideon's character and thematic consistency last time, I get why some folks would be a bit confused at this point.

And then there's the question I started last week with: why does this keep happening to Gids, why does he keep ending up as a follower for people handing out questionable orders? I think we can explain it in-world as a result of his character conflict, sureâ.â.â.â but he's gone through this exact same loop arguably four times now by my count. Shouldn't he have, you know, learned? Even a little?

Watsonian analysis is seductive because it'sâ.â.â.â kind of how we read? Part of the reading process is constantly being confronted with the unexpected, things that don't fit our existing understanding of the text, and reasserting the illusion that the text's world is consistent by filling those gaps ourselves. That's the basics of reader-response theory! But because it's something we're somewhat naturally inclined to do, it can also lead to overly tortured justifications for things that really make a lot more sense out-of-world. And, for that matter, it's easy to miss something crucial I mentioned last time: that texts might have meanings that impact OUR world, meanings maybe not intended by their creators! So, Watsonian analysis can be helpful for our enjoyment of a thingâ.â.â.â but it can also, I think, cloud our ability to judge the media we consume.

It might be helpful to look at Gideon's development after Laura Resnick created him. Gideon's first appearance was in Zendikar, when he showed up (to the delight of the storyline community â it's awesome when book characters finally get a card!) just in time to fight some Eldrazi. I think this choice made a lot of sense. Gideon had a reason to be on Zendikar â he was following after Chandra â and he provided a perspective on the ground, in Jenna Helland's The Battle of Fort Keff, much the same way he serves as a window into the Trials on Amonkhet. It's a decision that makes sense in and out of world.

Well, mostly. See, the demands of the card game are such that Gideon has to sort of be involved in the conflict of the plane even though I'm not sure it makes a ton of sense for him to get drawn in. But, ok, probably when you're faced with the calamity that is the world-devouring Eldrazi swarm, if you've got indestructability, a magic whip, and a belief in Justice, you're gonna get a little caught up in events. Gideon is relatively aloof in TPF â in part because, to jump out of world again, he's playing second bill to Chandra who has to drive the plot â but he still is someone who wants to do the right thing. Protecting innocents on Zendikar? That seems reasonable.

But these same demands create a weird conflict narratively when Gideon next appears. See, he shows up on Ravnica searching for the Infinite Consortium following the events of Rise of the Eldrazi, andâ.â.â.â promptly gets sucked into guild squabbles, teaming up with the Boros to smash some faces.

I'm going to beg you to accept for the sake of this article that Aurelia, commander of the Boros at the time, is a morally dubious character, if only because randomly writing a whole article on Aurelia and the Gateless Movement on Ravnica NOW in the midst of Amonkhet previews seemsâ.â.â.â pretty dumb, from a strategic promotion standpoint? I'll just note that the block wasâ.â.â.â well, kind of a mess, narratively speaking, constantly revealing the Guilds as morally questionableâ.â.â.â while also ultimately casually discarding the Gateless and their rebellion against the Guilds. 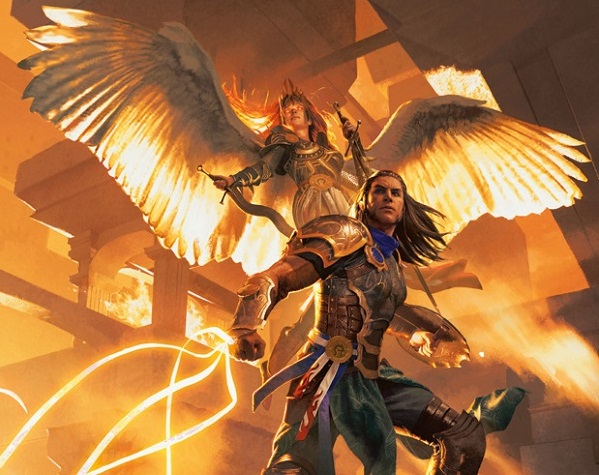 Why was Return to Ravnica so jumbled? Marketing. Ravnica is associated with the Guilds, so the stuff we saw in Agents of Artifice of a post-Guild Ravnica had to be retconned and the Gateless rebellion couldn't go anywhere, for the same reason Mirrodin had to be repopulated and the Cursemute had to fall. Status quo, as they say, is king, at least when the status quo is what you want to sell a set with.

The result, among other things, is that the cards show the Boros massacring goblins, the overall arc of the block effectively excuses them, and the Secretist and short stories themselves mostly just sorta blow this plot point off. The result I think is the sense that, well, it's ok that the Boros are militarized police cracking down on civilians because the Gruul and Rakdos and goblin gangs are violent, fundamentally irrational thugs. Not a great look back during the set's release, and certainly not a great look in 2017.

I don't think this law-and-order subtext is intentional, but that doesn't erase it, and I think it's important to consider how it occurred and the impact it has on Gideon's narrative. Most egregiously, on the cards the Boros violently repress the Gateless, while in the story Gideon vows to protect the Gateless.

This makes some sense when you consider that the creative team of the day was much smaller, had less resources and time, and was still scrambling to figure out how to tell (and sell) the story in the wake of the Novel Line collapsing for the first time. The novel line, by the time of Scars of Mirrodin, was in deep trouble, and killed off completely by the dual failure of Quest for Karn beingâ.â.â.â less than positively received in the fandom, and the failure of Curse of the Chain Veil â which was commissioned, paid for, and then ultimately scrapped due to being (for reasons no one at WotC has ever disclosed beyond implication) not publishable. (One of these days I'll dig up Brady Dommermuth's veiled â ha ha â statements about CotCV for posterity).

The result was that the novel line was unexpectedly ended completely, which is why Innistrad had, weirdly, little accompanying story material. Return to Ravnica was one of two short lived experiments in selling ebooks before the novel line finally died for good, and I think it's clear that RTR suffered in many ways due to the transition pains of Magic's storyline. This was also a period where they were still trying to figure out how to weave Planeswalkers into set stories while using them to sell sets â a problem that I think is still ongoing â so, that probably explains a lot about why Gideon is there to begin with.

It's not that Gideon's narrative makes no sense whatsoever in-world, though, and that, to me, is interesting. I think if we're trying to suss out an interesting arc for Gideon (an important goal if, say, we're on the Creative Team writing these stories) it makes some sense to look at his in-world motivations. And undeniably what we see here is another instance of Gideon allying with an authority (or authoritarian) figure because he wants someone to give him orders (run with THAT, fanfic writers!) and then there's that flavor text suggesting that Gideon becomes a bit more disillusioned with the Boros, which, hey, it might not appear in the story but I guess we can use it. And Gideon's narrative of dragging himself back and forth between Ravnica and Zendikar is fascinating from a character perspective, even if it also kinda feels like a bit of a patch job on the part of the Creative Team, an attempt to shore up this dubious decision to have Gideon prioritize goblin gang wars over the death of an entire world. Does it click with his character in TPF? Not really. But we can read it in a way that does give him something of a compelling arc.

It's that overall arc we'll be looking into next time as this mini-series of articles concludes with a look at Magic Origins and, finally, the end of Gideon's arc in Amonkhet (and where his arc might be going in the future). What I hope this has made clear is that even as we enter back into that arc and try to understand what Gideon's character says for us, for our own lives, we should keep in mind that not every discrepancy can or should be pasted over, because the process of creation in any context, let alone that of a shared world narrative that is told in several different media and is subject to all kinds of forces and business decisions (not to mention the mechanical and balance decisions that underlie all of Magic!) pulling in different directions.

If there's one thing to take away from this, it's that Gideon's creation is just as fraught with contradictions as he, himself is. And it's that tension we'll try to understand next time.