Login
0 Item
Advanced Search
Sign In
Create Account
With Ravnica Allegiance on the horizon, your local game store has brought out a blast from the past in the form of throwback drafts! You're now winding your way through an original Ravnica block draft, and so far you've discovered one thing: You're apparently not as good at card evaluation as you think you are.

Fortunately, your opponents are probably in the same category. When Lenka blew up one of your Mountains with her Barbarian Riftcutter, you didn't think much of the move. Considering that the Riftcutter was standing in the way of your Gleancrawler at the time, it was probably to be expected.

A few turns later, however, Lenka came up with a Seismic Spike to take out your other Mountain, and her plan became a lot more obvious at that point. This made the game a bit more concerning for you, particularly as your Gleancrawler had become the victim of a Condemn by that point.

That said, your opponent hasn't done much since then, and you've established a couple of convenient mana sources in your Verdant Eidolon and Wild Cantor. Lenka has merely stopped you from activating your Scorched Rusalka and casting the Taste for Mayhem in your hand, and you're not in a hurry to do either.

You draw the third and last source of Red mana in your deck - a Blood Crypt - and immediately play it tapped. With your life total running low, and you can't risk throwing away a couple of life points for little gain. On top of that, you're not able to get past Lenka's defenses at this time: Her Souls of the Faultless and Stoic Ephemera are major obstacles for you, and her newly-cast Ostiary Thrull is also about to come online.

You pass the turn, wondering if your opponent is going to deal with the Blood Crypt as well. To your surprise, she does - with a top-decked Angel of Despair!

You glance at Lenka, but her expression is unreadable. Whatever the case, she's cut you off from one of your colors, and you now have the added bonus of having to deal with a 5/5 flyer. Your suite of relatively small creatures doesn't look like it'll be able to help much, so a lot is riding on your next draw.

Unfortunately, that next draw is a mere Street Savvy, which helps against a completely different type of evasion. You only dumped it into your deck as a sideboard option against Lenka's two Sewerdregs, and considering that neither of those Sewerdregs are in play right now, you're now feeling a little silly at the moment.

From the way it looks, you might be destined to lose this match. Or you can take this the other way and start looking for some means by which you can turn the tables against your Mountain-destroying opponent. Admittedly, you're not feeling too good about your chances... but you've gotten yourself out of worse spots before.

It is the start of your first main phase. Defeat Lenka before the beginning of her next combat phase. 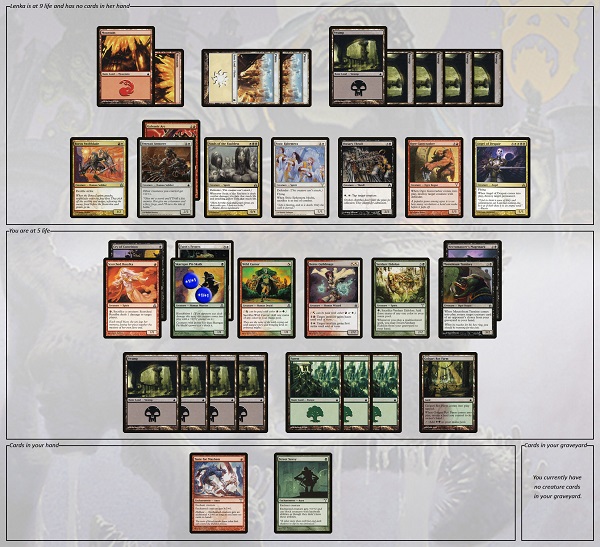 You currently have no creature cards in your graveyard, due to Lenka's Sewerdregs.

Lenka is at 9 life and has no cards in his hand. She has the following cards in play:

If you think you've got a great solution in mind, don't put it in the comments! Instead, send it to puzzles@gatheringmagic.com with the subject line "Puzzle - Depths of Despair" by 11:59 P.M. EST on Monday, January 7, 2018. Sean's on vacation right now, so the solution to this puzzle will be posted in a couple of weeks once he gets back!

Because Sean is currently on vacation, this section is empty at the moment. We'll update this in mid-January with the solution to the previous puzzle!