Login
0 Item
Advanced Search
Sign In
Create Account
The seat at the table is empty, and you look around. "Where's Mari?" you ask.

"If you're looking for that lady I'm supposed to be playing," her opponent says, "she left just a minute ago. I think she said something about meeting up for a package."

"Ah, okay. So you haven't finished your game yet, erâ.â.â.â"

"Likewise," he says without smiling. "No, we haven't finished yet, but we're on our third game."

"We've been at a standstill for a while, but my Celestial Force should change things. Your friend headed off shortly after I cast it last turn. She already started her turn and drew a card, though."

"She'll be back," you assure him. "Mari never leaves a game just like that."

"Let's hope so. I've got enough of a headache trying to figure out this Unabridged Cube draft. If I have to process one of each card ever printed for much longer, I'll need to pass by the pharmacy."

You glance at the two face-down cards sitting behind Mari's untapped lands. "Is that her hand?" you ask.

You carefully flip the cards over, making sure no one else can see what they are: a Compelling Deterrence and a Piracy Charm. Together, they don't exactly make the best hand in the world. But maybe Mari has something in mind.

"And you're at twenty?" you ask, feeling like you've been in this situation before.

Hearing this makes you even more certain that Mari has something up her sleeve. As if to coincide with that thought, Mari chooses this moment to walk through the store entrance and sit herself down at the table.

"Sorry about that," she says. "My aunt called and said she wanted to drop off something for my mom." She pushes a plastic bag toward you.

"So are we ready to continue?" Kent asks.

"Yup," Mari says, glancing at you. "I don't know if my friend here noticed, but you'll be glad to know that we won't be stalemated that much longer."

It is the start of your first main phase. Defeat Kent before the beginning of his next combat phase. 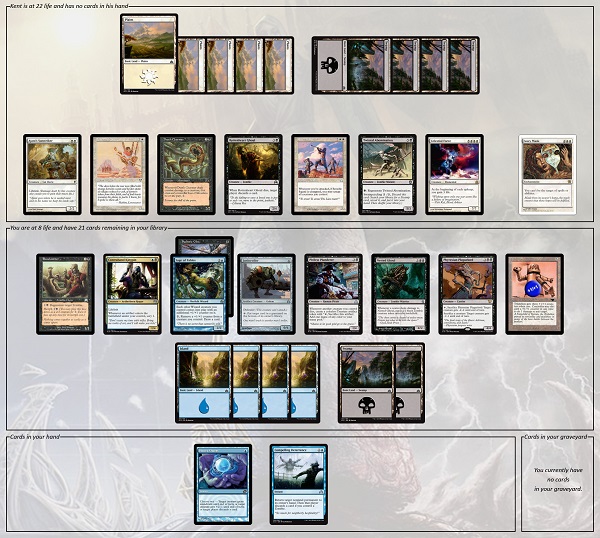 You have not yet played a land this turn. You have 21 cards remaining in your library, although you do not know the identities or order of any of these cards.

You currently have no cards in your graveyard. ("I was using Junktroller's ability a lot," Mari explains.)

Kent is at 22 life and has no cards in his hand. He has the following cards in play:

Kent has no relevant cards in his graveyard.

If you think you've got a great solution in mind, don't put it in the comments! Instead, send it to puzzles@gatheringmagic.com with the subject line "Puzzle -- Beyond Your Grasp" by 11:59 P.M. EST on Sunday, February 11, 2017. We'll include the best ones in next week's article along with the next puzzle!

"It looks like the best we can do is 14 damage in the air, which doesn't get it done," Subrata Sircar remarks."Our path to victory thus lies through Revel in Riches."

"As much as we want to just win on this turn," Ryou Niji admits, "we simply don't have enough resources to do so. We only have three creatures that can attack, and even though we can give all of them flying and remove both of our opponent's flying blockers, that's only 14 damageâ.â.â.â and if we try to get more damage by recurring Buccaneer's Bravado, we can't remove both blockers. The Primal Amulet would get us there if we can transform it and cast one more spell, but that would require that we cast Spell Swindle, and we need all of our other spells to resolve.

"Hence, we need to survive. Expel from Orazca can ensure that our opponent doesn't draw anything relevant for a couple of turns, but we still need to do something to prevent us dying to an alpha strike. At this point, the alternate win condition on Revel in Riches becomes attractive. Spell Swindle can give us a large number of Treasure tokens, but since the opponent will not necessarily help us, it will be very expensive to do so, even with Primal Amulet. Unlessâ.â.â.â we let Spell Swindle counter itself?"

Ryou's solution involves a lot of forward planning, as well as a couple of unorthodox moves. Even if you don't know what Qian will do, you still have some certainties to work with. One of these is the fact that Relentless Raptor will inevitably have to attack or block:

It's worth noting that this solution requires you to cast One With the Wind on Qian's Relentless Raptor, or otherwise your double-striking Dire Fleet Hoarder will kill it without dying itself.

"After a lot of consideration," Simon Lazarus writes, "I thought of using a copied Spell Swindle on itself to gain as many Treasures as possible. But I thought that we needed to flip our Primal Amulet before we could attempt the 'cast a spell, then cast Spell Swindle on it, then use the copy of Spell Swindle on the first one' plan, and only later did I realize that we could use the spell that starts this plan to flip the Amulet.

"I first thought that this 'Swindle plan starter' spell was going to be Buccaneer's Bravado, and finally I realized that the only way we could absolutely guarantee that our Dire Fleet Hoarder and an opponent's creature both die (so that we get enough Treasure tokens) was to cast One With the Wind on the Raptor and use the Bravado when it blocks. And obviously, we have a lot of freedom as to when we cast the second Expel from Orazca."

One variant of this solution, in fact, involves holding the second Expel from Orazca and first seeing what your opponent does. Assuming that you do so, Qian draws her Captain's Hook on her next turn and moves to her combat phase. From there, we go into Russell Jones' analysis:

Casting Expel from Orazca at this point will be your fourth spell for Primal Amulet, so you can then execute the Spell Swindle / Spell Swindle copy maneuver before your Expel resolves. Treasure tokens for everybody!