You and Nox are in the third game of your Unabridged Cube match. You've managed to get Nox down to a scant four life, but that was before his

deck closed ranks and started shutting down your attacks. On top of that, Nox now has two flyers on his side... and you took more than a few hits before you finally drew a Giant Spider to stand guard.

Unfortunately, Nox is grinning at you right now. You don't like that grin; it brings to mind the cat that's discovered that the birdcage is open.

"Tap five, Blessed Light on your Spider?" he asks.

Your hand freezes above your two untapped swamps. You could feed the Spider and one other creature (probably your Discordant Piper, you think) to your Rusalka and try to take out either of your opponent's two flyers. Or you could hold back in favor of the nasty surprise you've been saving in your hand.

After a moment, you decide to go for broke. "No responses," you announce, pushing your Giant Spider off to the side.

You lick your lips. Something about this situation feels wrong, but this is hardly the time to back out. You tap your last two swamps and slap a card onto the table.

"Nemesis Trap!" you cry out.

Nox gives you that grin again. "Remaaaaand," he says, drawing the word out like chewing gum. "On your Nemesis Trap, seeing that it's the only other spell on the stack and all."

That makes you slump in your chair. With no open mana left, you're obviously taking the damage. Nox's comeback might as well be complete now.

"Go to my second main phase," Nox announces, "and I'll play the Island I drew from Remand. So... you're at one life?"

Nox gives you a suspicious look. "How could you be at three?" he asks. "Wait, I'll get a judge."

"Just hold on first," you say, going over the numbers on your notepad. You're pretty sure you've taken down every single instance of damage correctly, so the only possibility that remains is... there.

"You pinged my Highland Game with your Stinging Barrier," you explain. "But Highland Game gives me two life when it dies. Did you take that into account?"

Nox considers this for a while. Then he mutters something about the stupidity of playing a Cube with one of each card ever printed, and leans back.

"So I guess I'm not dying to your Stinging Barrier this turn. At least, not yet anyway."

You untap your permanents, feeling more than a little grateful at the opportunity. You still have the Nemesis Trap at your disposal, so all you need to do is draw a bit of support to round out your defenses.

Naturally, your deck refuses to cooperate and gives you a Swamp.

"That sounds a lot like a concession," Nox says, without even looking up.

"In your dreams," you say, glaring at him.

He might be right, though. Your chances to get back into this game are slim, although you've been in tighter spots. To be completely fair, Nox is probably going to beat you one day and never let you hear the end of it. But you'll be darned if this game will be the one where he does.

It is the start of your first main phase. Defeat Nox before the beginning of his next combat phase. 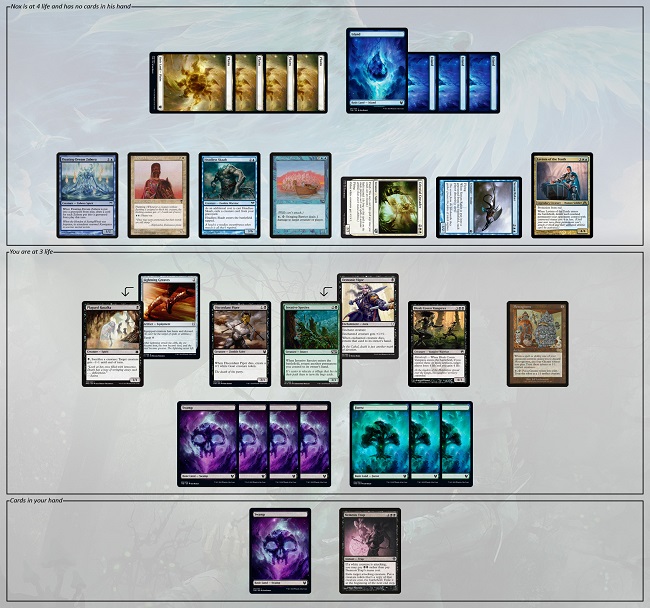 Nox is at 4 life and has no cards in his hand. He has the following cards in play:

Instead, if you think you've got a great solution, you can send your solution to puzzles@gatheringmagic.com with the subject line "Puzzle - Your Own Worst Enemy" by 11:59 P.M. EST on Monday, March 23, 2020. We'll include the best ones in next week's article along with the next puzzle!

"So, two things are immediately known about this puzzle," Max Bernstein writes. "You can't get enough combat damage through to win (but you have an enchantment that can), and you need to get rid of your Wormfang Behemoth somehow. As always, it's a lot trickier than that to do, but do it we shall!"

"Having initially forgotten about the Strider Harness," Jay Sweitzer-Shalit notes, "I immediately focused on giving the opponent Delusions of Mediocrity and then destroying it. I thought about using Legerdemain to give it to them, but as the only way to get it off the battlefield is Triton Cavalry, I had to get creative:

"After finding a way to trigger Heroic on the Cavalry with Walk the Plank," Jay notes, "I got stuck for a day on the last two life. I then remembered the Changeling Outcast and Strider Harness, and used those for the kill."

That said, this puzzle has a lot of flexibility, and there's a slightly more efficient way to set up the win. Sean Patrick Keatley's solution points out that if you need to change Triton Cavalry's creature type in order to use Walk the Plank on it, you might as well make the change work for you:

"You could win even with Bonnie at 14 life," Jonah Comstock observes, "since you could still cast Changeling Outcast, equip the Strider Harness, and tap it for 2 more damage. We even have the mana to do so."

"This puzzle required me to dive into the comp rules and learn something new," Jonah continues. "Unless a type-changing effect specifies that a card retains its original type, it doesn't." Considering that this puzzle requires you to give merfolk a fear of water, that's probably good.