"I don't know," Cécile admits. "I try not to think about it. Impending Doom on my Fledgling Dragon?"

"Yeah, sure," you say. "I guess I shouldn't have worried about whether or not you had enough room for us here. If there was any place where I'd want to self-isolate, it would probably be this one."

"Yes, the twins have it quite good."

"Where are the twins, anyway?"

"Somewhere on a wildlife tour with their parents," Cécile says. "They're halfway around the world right now, I think. I just know that their flights got cancelled and they need to stay where they are, so they're not going to be back anytime soon."

Knowing the twins, there's probably a 'wildlife' joke in there somewhere. "When you said you were house-sitting," you say, "I thought that meant you were also babysitting. That's... good, I suppose."

"At least they're getting some family time," Cécile says, nodding. "Their parents were the ones who suggested that I get a few friends to stay over, in fact."

"Hey, you said it yourself," Cécile says. "This place is too much house for one person. Attack with my Fledgling Dragon?"

"Whoa, hold on. Are you at threshold?"

"I've got eight cards in my graveyard; I was at threshold a couple of turns ago. You're not paying attention."

"I was distracted by the size of this place," you say dryly. "So how big is the Dragon?"

"I'm obviously blocking that with my Heir to the Night," you say, dropping the Vampire into your graveyard.

"I'll finish my turn with a Dazzling Ramparts," Cécile says, dropping the 0/7 Wall into play.

You chuckle. "It's not exactly the Unabridged Cube experience," you point out, "but I'll take it."

"Renata and Raffaela have a good-sized collection, but not quite one of each card ever printed," Cécile notes. "What's shocking is how well they've organized it. I'll show you their playroom later."

"They have a playroom?"

"They have a playroom for their cards," Cécile says, emphasizing that last bit.

"I feel so inadequate now."

"It helps if you start your turn," Cécile says. "I think your friends are due to arrive very soon, so we need to set aside some time to help them settle in."

You untap your permanents and draw a Grim Contest. The game isn't looking too good for you right now, and for a moment you consider throwing it in and putting another pile of cards together. That said, there's not much else to do before Mari and CJ arrive, so you might as well make the most of the next few minutes.

Cécile seems to be thinking along the same lines, though. "If you're going to take a while longer, maybe we should pack up."

"I just need a couple of minutes," you say.

"Why would the twins have to travel around the world to see a bunch of animals, anyway?" you ask in jest. "They could probably hold their own safari in here, if they wanted."

It is the start of your first main phase. Defeat Cécile before the beginning of her next combat phase. 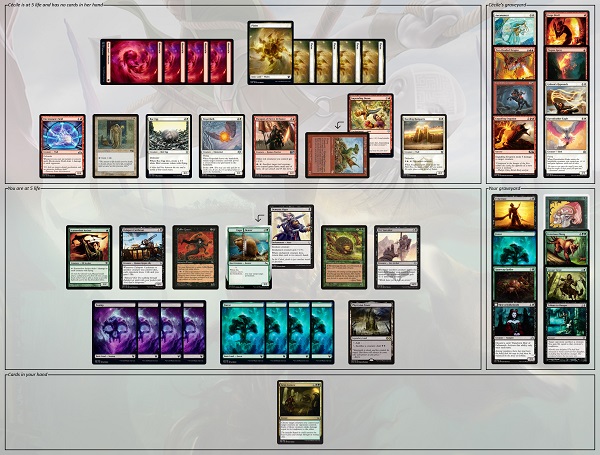 Cécile is at 5 life and has no cards in her hand. She has the following cards in play:

Cécile has the following cards in her graveyard:

Instead, if you think you've got a great solution, you can send your solution to puzzles at gatheringmagic dot com with the subject line "Puzzle - Red in Tooth and Claw" by 11:59 P.M. EST on Monday, March 30, 2020. We'll include the best ones in next week's article along with the next puzzle!

"This puzzle is pretty easy if you work backwards," Hyman Rosen notes, "because the steps just fall into place. The thinky-tricky bit is realizing that while having a White creature attacking reduces the cost of Nemesis Trap, you don't have to target the White creature itself to get the cost reduction."

"The solution is actually quite simple," Jonah Comstock writes. "We need to trigger Bleak Coven Vampires' ability. How do we do that? Well, we need to get one more artifact on the board, and we need to either bounce and recast the Vampire or make a copy of it with

Nemesis Trap. Option 1, however, is going to cost way more mana than we have.

"And what about that artifact? It would be nice if we could just activate Metrognome's ability, but if we do that, Nox's Stinging Barrier will wreck our day with the Metalcraft trigger on the stack. So we'll have to get a smidge more creative."

You don't want to target Floating-Dream Zubera with your Plagued Rusalka's ability for one reason: It allows Nox to ping his own Zubera to death, and draw a card. A Force Spike, for example, would be really bad for your Nemesis Trap.

"The title for this puzzle could run both ways," Michael points out. "You may be the one that created an antagonist out of a trap for one of your own creatures, but it was Nox's creatures that led to his own downfall. Without Serum Raker's discard or Celestial Crusader's bonus, you would have been unable to snatch victory from the jaws of self-defeat."