Login
0 Item
Advanced Search
Sign In
Create Account
Vedalia drops another +1/+1 counter on her Fretwork Colony. "That puts me at 10 life," she says.

"I'll tap six to attach Skinwing to Fretwork Colony," Vedalia continues. "That makes it a 9/9 flyer."

"And your Germ token dies," you point out.

"Not really," you admit. "It doesn't take a genius to know that you're putting that Skinwing onto your largest creature and sending it into the red zone at some point. In fact, I would have expected you to do that last turn, but you didn't have enough mana then."

"You sound like you've seen this kind of thing before."

"You see a lot of crazy things when you draft our Unabridged Cube," you tell her, "but some things remain the same. We might have to work with one of each card ever printed, but big flyers are universal."

"That doesn't seem to be bugging you."

"I figure that the Abzan Skycaptain can still buy me a turn," you say. "I won't be able to get it past your Stingerfling Spider anyway."

"Well," Vedalia says, tapping two more lands, "you might want to think about that."

"I drew my Visions of Brutality," she says, placing her aura on your Skycaptain. "Attack with my Fretwork Colony?"

You glance at your board and suddenly realize that you're in trouble. "Iâ.â.â.â guess I'm taking nine damage," you say.

It's painfully obvious that the Colony's going to crush you like a gnat if you don't find a way to deal with it very soon. You untap your permanents, knock the top of your deck twice, and drawâ.â.â.â a Blasphemous Act!

"Good draw," you say, nodding. Now you just have to figure out what to do with your unexpected stroke of luckâ.â.â.â

It is the start of your first main phase. Defeat Vedalia before the beginning of her next combat phase. 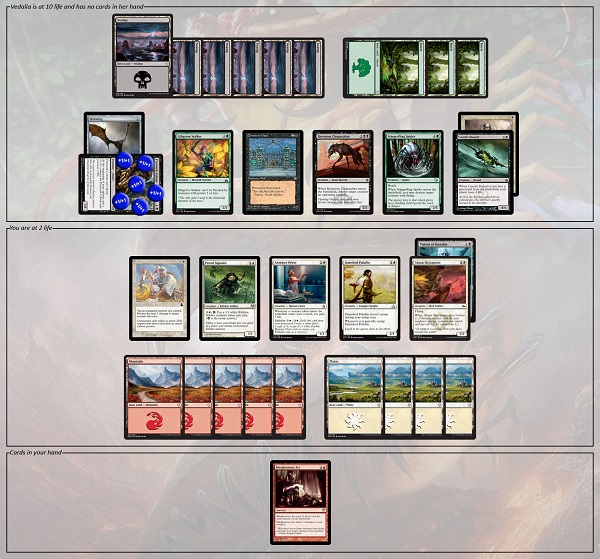 Vedalia is at 10 life and has no cards in her hand. She has the following cards in play:

If you think you've got a great solution in mind, don't put it in the comments! Instead, send it to puzzles@gatheringmagic.com with the subject line "Puzzle -- Pest Control" by 11:59 P.M. EST on Sunday, May 13, 2018. We'll include the best ones in next week's article along with the next puzzle!

"We're thoroughly gummed up on the ground," David Edelstein writes, "but at least we have essentially unlimited mana. Because of the situation on the ground, our win will probably have to come through our Serra Disciple, with its flying and (critically, as we'll see later) first strike abilities.

"Unfortunately, the Disciple is too small to kill Enrique, being only a measly 1/1. We have two historic spells in hand with which to pump it (and no way to get more), but that will only get it up to 3/3, and our opponent is at 4 life. One of those historic spells is Triumph of Gerrard, which can provide pumpâ.â.â.â but only to a creature that's already our strongest one. Even with playing both Sagas, Evra and our Dubbed Bloodstone Goblin seem much more hero material. Heck, Evra is an avatar of the same forces as made up one of the weapons Gerrard did use in his triumph!

"So Serra Disciple needs to prove that it's the most promising hero by eliminating the competition. Bloodstone Goblin falls easily -- we have a Skirk Prospector that can just turn it into mana. Evra, however, is trickier. She's not a goblin, and trading our life for her power will only make her stronger, which doesn't help. But what happens if we trade, lose some life, and then trade back?"

With that said, there's only one card on the table that allows you to lose life: Slimefoot, the Stowaway. All you need to do, then, is to kill a Saproling token. As Joshua Hupp writes:

It must be acknowledged that Pyromantic Pilgrim is exclusive to planeswalker decks, so it's the odd card out here. You're sure that you opened it in one of your booster packs (as strange as that might seem), but at least that explains why your judge is watching your game at the moment.

"On second thought," Ryou Niji observes, "wouldn't the Slimefoot activation have helped our opponent here? If our opponent didn't cast Untamed Kavu, the ability to make two more Saproling tokens on demand turns out to be a deal breaker: Our opponent could make two Saprolings in response to Chapter I of The First Eruption, go up to 7 life from the Slimefoot triggers, and leave us with no way to deal lethal damage. As these puzzles have shown from time to time, it can be dangerous to have no instant-speed options, because that would give the opponent free rein to do any number of fancy things for the kill."

Still, it could be worse. "I guess Evra was just looking back longingly on those halcyon days when mana burn still existed," Russell Jones writes."Then you wouldn't have even needed to play Firefist Adept: instead, you could mana burn for 5 during your draw step, only pay for Evra's ability once, and wouldn't need to sacrifice the Goblins. Plus, by not giving Enrique a Saproling, you'd even be able to cause overkill damage in the end if that still worked! Can I get a (halcyon) witness?"

That said, it might still be worth it just to see you win this game with a 1/1 creature. "There's nothing like telling the bird disciples stories about the old days to get them pumped up," David Arnold remarks.