Login
0 Item
Advanced Search
Sign In
Create Account
Your game against CJ has been marked by some extreme swings. His

deck started off quickly with several small creatures, but the initial rush died down as you added some defensive creatures and a Zuran Spellcaster to the table. CJ then shored up his side with a few lifegain cards, capping things off with a Leyline of Sanctity that's prevented you from pinging him for one each turn.

The real event of the game, however, involved you casting Kozilek, Butcher of Truth off an Irencrag Feat. Having an Anger in your graveyard allowed you to immediately attack with Kozilek and force CJ to lose five permanents - four to the big Eldrazi's annihilator ability, and one to the chump-block. CJ, however, countered with a massive Congregate to keep his life total stable (if a bit high for your taste), then proceeded to tie down Kozilek with a Sky Tether on his next turn.

Now you're both suspended in stalemate. (Or you would be, at least, if CJ didn't have the only flying creature on the table.) And considering that this is one of the more exciting things to happen in the last week, Mari and Cécile can't help busybodying themselves at you.

"I'll hit you for four more with my Swans of Bryn Argoll," CJ says, turning it sideways.

"Yeah, well, that's obviously getting though," you say. "I'll ping it with my Zuran Spellcaster first."

"It's just going to prevent the damage," CJ points out.

"It's for the extra card," Mari says. "Read the Swans again."

You draw a Merfolk Secretkeeper and shrug. "Nothing good," you say, "so it connects for four. I'll go to four life."

"This is such a strange board," Cécile says, shaking her head.

"Well, obviously there are no words in the vernacular that can describe this great event," you say.

"I'm serious," Cécile says. "I mean, you've got a Zuran Spellcaster that can't ping much of anything. You've got a 12/12 creature that's doing its best impression of a wall. You've got an Oversoul of Dusk that can't attack. And you've got a Hornet Nest that's just waiting for something to disturb it."

"Technically that last one isn't out of the ordinary," you point out. "You could argue that that Hornet Nest is doing its job perfectly."

"I'm going to be in trouble if I don't draw something for your flyer," you note. "That would make this a really anticlimactic end to this game."

"It's not much of a game if all you're going to do is neutralize each other's threats," Mari says. "Besides, CJ's just going to slow-roll you with a million Elf Warriors if you don't run out of library first."

You peel a Diminish off the top of your deck and show it to Mari. "This is probably going to give me a short reprieve, but it's not going to stop CJ from doing what he's going to do anyway."

"Thanks," you say, hunting for a counter.

"I might have this one already," CJ says. "I'm seeing nine attackers - ten after I activate Imperious Perfect this turn - against your seven blockers. Even if you did draw something that can get rid of my Swans, I'll still have four damage spilling over from an alpha strike."

"That's assuming that you actually make it to next turn," Mari says. "How many cards do you have left in your library?"

"That is interesting," Mari says, getting that look in her eyes. "Do either of you have anything else in your decks that triggers if it hits the graveyard from your library?"

You and CJ look at each other, and then you turn back to Mari. "Okay," you say, "now I really have to ask you to spill the beans." 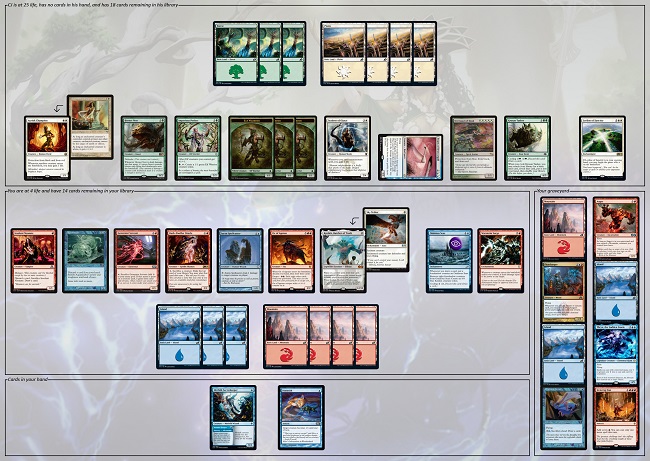 You have not yet played a land this turn. You still have 14 cards remaining in your library, but you know neither the identities nor the order of those cards. You do know that none of those cards has an ability that triggers if it's put into your graveyard from your library, though.

CJ is at 25 life and has no cards in his hand. He has the following cards in play:

CJ has 18 cards remaining in his library, none of which also has an ability that triggers if it's put into a graveyard from the library.

Instead, if you think you've got a great solution, you can send your solution to puzzles@gatheringmagic.com with the subject line "Puzzle - Tentacular Spectacular" by 11:59 P.M. EST on Monday, June 1, 2020. We'll include the best ones in next week's article along with the next puzzle!

"We have a fair number of choices on this board," Jonah Comstock writes, "but our solution hinges on getting as much mileage as possible out of Keensight Mentor and Frondland Felidar's abilities. With the right sequencing, we're going to make two 5/7 creatures with vigilance, get two blockers out of the way, and then make sure all Cécile's blocks are bad."

"You can start by counting your mana," Greg Dreher writes. "You have 10 mana available, which could be spent as follows:

"It's worth noting that we effectively can't tap down Glimmerbell," Jonah adds, "since Cécile has the mana to untap it. Luckily, as the untapped creature with the second-least toughness, we weren't that interested in tapping it down anyway."

"I got the gist of the solution right away," Jacob Butcher continues, "but got stuck for the last 3 points. Mutate is a giant red herring for this puzzle. I kept poring over its rules but couldn't see how anything could mutate.

"Finally I realized that by delaying trample and Solid Footing until after blockers were declared, I could ensure that both Solid Footing and trample avoided Glimmerbell - ensuring that those last 3 points of damage land on Cécile."

As a result, as James Parmenter notes, "We have to be a bit more careful around how our opponent blocks:

Before blockers are declared:

After blockers are declared:

If both Vigilant creatures are blocked:

If one of the Vigilant creatures is unblocked:

Of course, your opponent can also choose to let at least two of your attackers through. In this case, however, you can simply cast Solid Footing on the unblocked vigilant creature for the win!

"The title not only gives us a hint to the solution," Jonah adds, "but also forces us to reckon with the fact that we're apparently resorting to cannibalism to win this game of Magic. They really should have given Bushmeat Poacher that 'non-human' clause..."