Your local game store's Modern Horizons prerelease turned out to be more popular than you anticipated. With most registrations sold out, you ended up settling for the final Sealed Deck tournament of the weekend... and even then youstill found yourself swimming in a dense crowd of opponents.

Unfortunately, you've ended up with a bunch of mediocre cards, and only just barely managed to put together a forty-card deck in Blue and Black. What's worse is that Jono, your first-round opponent, somehow pulled a ton of Slivers in his pool: You know this because you got dogpiled by three or four of them in your first game.

Your second game turned out to be more of your speed, though, and for a moment it felt like you were winning. You harassed Jono with a turn-three Phantom Ninja for several turns before he finally drew a Pyrophobia to kill it, and your Rank Officer was good enough to hold the ground for a little while. You also managed to convert an unblocked Eyekite into a Ninja of the New Moon at some point, although Jono's Cloudshredder Sliver and Cleaving Sliver are now stopping it from attacking.

You glance back at him. "You have something in mind," you say.

"Oh yes indeed," Jono says, tapping three lands and placing a Lancer Sliver on the table. "I'll attack with all three Slivers," he announces."That's a 3/1 and two 4/2s heading your way, and they all have flying and first strike."

You crack your knuckles and check the lone card in your hand. "I'll tap four and cast Rain of Revelation," you say.

You draw three cards: String of Disappearances, Swamp, and Umezawa's Charm. That makes your choice easy, at least. "I'll pitch a Swamp," you say.

"I'll tap an Island to cast String of Disappearances on your Cloudshredder Sliver," you say. "That'll just leave you with a couple of 4/2 non-flying first-strikers."

"So you've got something for the Cancrix," Jono says.

You pause for a moment, and then shake your head. "Ugh, I forgot that you had that in your graveyard," you say.

"I had it fanned out, too," Jono says, smiling. "I'll also tap two and cast Shelter on my Cleaving Sliver, giving it protection from Blue. That should keep it alive."

"On my postcombat main phase, I'll just re-cast my Cloudshredder Sliver and play the Mountain I drew from the Shelter. Although," Jono notes, "I was wondering about something."

"Why didn't you just kill my Cloudshredder Sliver with Umezawa's Charm?"

"Yes it would. I would have cast Shelter to protect it, and you would probably have responded with the String of Disappearances."

You sigh. "You can't get everything right the first time, I suppose."

You glance at your scorepad, noting that Jono's at an easily-reachable seven life. In fact, if it weren't for his Cloudshredder Sliver, your Smoke Shroud-enchanted Ninja of the New Moon could probably just float over and smack him for seven damage. Sadly, a good amount of your removal is now sitting in your graveyard.

What that means, though, is that you have to find some other way to bring Jono's life total to a big fat zero. But can you?

It is the start of your first main phase. Defeat Jono before the beginning of his next combat phase. 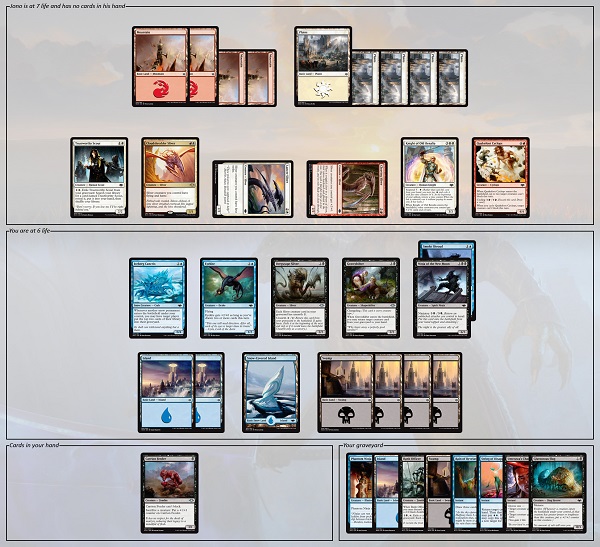 Jono is at 7 life and has no cards in his hand. He has the following cards in play:

If you think you've got a great solution in mind, don't put it in the comments! Instead, send it to puzzles@gatheringmagic.com with the subject line "Puzzle - Midnight Snack" by 11:59 P.M. EST on Monday, June 17, 2019. We'll include the best ones in next week's article along with the next puzzle!

"This puzzle is a little tricky in that we are not only in a 'don't die' situation," Pete Martin writes, "but we also need to kill or be killed as all Cristina is going to need to do is untap, wipe that smug look off her face, and then activate her Thraben Militia to end our suffering. So let's end hers first."

"I spent awhile trying to kill the Ravenous Giant on her end step," Jonathon Skillman continues, "but after running all the ideas it turned out to be impossible. Then I thought I could try living through it - the Vampire Envoy looked possible - but I couldn't find any instant-speed way to tap it. But after checking and re-checking my board, I looked to Cristina's board and saw Court Street Denizen."

"At this point," Philip Belin says, "I had two goals: give Cristina a White creature, and make Court Street Denizen target Vampire Envoy. The first one is easy enough: I just had to kill off her Doomed Traveler. The second one, however, is tricky. Since aside from Ravenous Giant, my creatures had no way to protect themselves, I came to the painful conclusion that I would have to literally boardwipe myself in order to win this game."

Fortunately, your situation effectively gives you two turns to do just that. Even then, though, as Gerard Munoz Soler writes, you come quite close to a loss:

In our opponent's End Step:

"This is a good example of a puzzle where the general idea is fairly obvious," Michael Feldman observes. "You need to force Cristina to activate your only life-giving card, but the sequencing is tricky. Eyeblight Assassin's unusable ability is a nice red herring. It was also not easy to see that you only need Armorer Guildmage's ability once."

Interestingly enough, Cristina may have made a mistake here: Several people wrote in to point out that she could have easily re-equipped the Lobe Lobber to another of her creatures during her turn for the final point of damage. But the more interesting bit is that if you had one more creature in play on your side, then you wouldn't have been able to pull off these moves and survive your Ravenous Giant's trigger. As Gerwin Ruiterkamp writes: "Good thing you didn't cast that Burglar Rat!"