Login
0 Item
Advanced Search
Sign In
Create Account
Cristina draws her card for the turn, and for one brief moment she stops chewing her gum.

"You're not the only one who got a preview card in their pool," she says.

You glance at the Turntimber Sower on your side of the battlefield. "You got one too?" you ask. "What is it?"

"Entreat the Angels," Cristina says, laying the big White sorcery on the table. "I'll pay the Miracle cost with everything I've got."

You remain silent as Cristina scrounges around for some Angel tokens. Eight Angel tokens, to be exact. It takes her a while to do so, but that's enough time to make you regret letting this game go as long as it has.

"Wait," you say. "You're not going to keep any of your lands untapped just in case? Maybe a Swamp to regenerate your Spectral Lynx? That Plains with your Security Blockade on it? Two mana to activate your Felidar Umbra?"

You glance at her cards. "What about your Wretched Anurid?" you ask. "It'll trigger once for each Angel."

She gives you a disinterested look. "Okay then, I'm at eighteen life," she says. "Same difference. You're still not going to be able to take me down in one turn."

"Yeah, yeah," she says, tapping her Razortooth Rats. "I'll attack with the Rats as usual."

"And I'm back at exactly twenty life from the Umbra's lifelink," Cristina says. "Like I said, you're not going to be able to take me down in one turn."

"Unless I draw something to get rid of your Angels."

Cristina shrugs. "I guess you could do that," she says. "This is the Unabridged Cube after all. But I still don't like your chances."

You have to admit that she's right. Even if the Cube does have one of each card ever printed, the odds of you drawing something like an Echoing Truth, an Evacuation, or even something as small as a Constant Mists is unlikely. That's not to say it's even possible in the first place, considering that you don't have any of those cards in your deck.

"I'll tap my Pristine Talisman during your end step to gain one life," you say.

"I'll untap and draw," you say, and flip the top card of your deck into your hand. Your expression immediately deflates: a Feral Prowler is not exactly the saving grace you need.

"Not what you were looking for?" Cristina asks, sounding more than a little bored.

"No," you admit. "But I'm going to try something anyway. What's the worst that could happen?"

It is the start of your first main phase. Defeat Cristina before the beginning of her next combat phase. 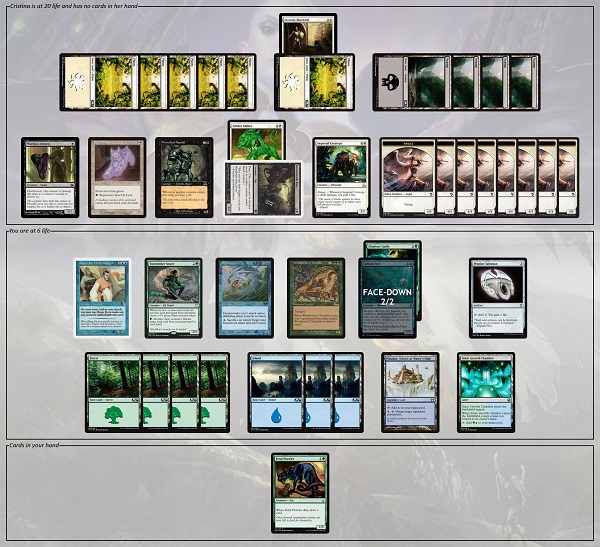 You have not yet played a land this turn. You have 15 cards remaining in your library, but you know neither the identities nor the order of those cards.

You currently have no land cards in your graveyard.

Cristina is at 20 life and has no cards in her hand. She has the following cards in play:

If you think you've got a great solution in mind, don't put it in the comments! Instead, send it to puzzles@gatheringmagic.com with the subject line "Puzzle -- Seeds of Destruction" by 11:59 P.M. EST on Monday, August6, 2018. We'll include the best ones in next week's article along with the next puzzle!

"While it might not be immediately clear how we could reduce the opponent's life total to zero," Ryou Niji writes, "it's still much easier than removing the Platinum Angel. The opponent has access to fourteen Green mana (seven from their lands, one from Steward of Valeron, and six from Karametra's Acolyte). Killing mana producers won't help much because the opponent can just create regeneration shields in response, which will last until end of turn."

"The Platinum Angel must die, obviously," Paul Simpson continues."We will need to create enough death triggers for Gaea's Embrace that Julius runs out of Green mana with which he can pay to regenerate the Angel. The only problem is that there are only eleven creatures and Julius can produce fourteen Green mana.

"So where then do we find the extra death triggers? Jolrael, Empress of Beasts is a good place to start."

Michael Feldman's solution covers this approach, and it turns out that the timing is important: If you're going to activate Jolrael's ability, you'll need to have two cards in your handâ.â.â.â but the only way to get one of these cards is by entering combat.

There are several minor variants to the above sequence, mostly because Julius has a lot of opportunities to draw mana from various sources in an effort to save his Angel. This would be futile, though: Try as he might, he can't overcome fifteen death triggers with only fourteen Green mana!

"For a deck without a lot of good removal," Chris Billard observes, "we actually leave Julius with very little on the board at the end of the game. After all is done, Julius might only have his Steward of Valeron, Karametra's Acolyte, and Acid Web Spider left. Everything else on his side, land included, will have been removed."

Ironically, one more bit of devotion would have changed this outcome entirely. "If only the Colorful Feiyi Sparrow were a Green creature," Greg Dreher notes, "Julius could have survived the turn!"