"So how's that Shapeshifter deck of yours doing?" Tally asks.

You snap your fingers. "That's where I remember you," you say. "You had that deck with all the artifacts."

"And you got me with that really complicated play," Tally adds. "I don't even remember how it worked."

"Sadly, I didn't think that the deck performed all that well overall," you admit. "I think I still have most of it in a shoebox somewhere, though."

"It's still funny how you're playing a Shapeshifter again."

You glance at the Phyrexian Metamorph on your side of the table. "It's a good card," you say.

You wonder if Tally's about to pull off something. The Metamorph has spent most of its short existence as a copy of her Sengir Vampire, and right now it's holding off no less than three flyers by its lonesome self.

Still, Tally does have a way through your defenses. Her Elusive Spellfist is currently in possession of a Silver-Inlaid Dagger, which means that it's attacking as an unblockable 5/3 creature every time she casts a noncreature spell. If she has one in her hand right now, you're going to be in a bad situation very soon.

Fortunately, she doesn't. Instead, Tally taps all but one of her lands to cast a Frilled Sea Serpent. Unfortunately, it doesn't take a lot of time for you to realize that the Serpent's ability still puts you in that bad situation you wanted to avoid.

"This is really cool," Tally says. "Why didn't I try this sooner?"

"The Unabridged Cube, you mean?"

"Yeah! I mean, it's one of each card ever printed! You get to try so much stuff this way!"

You shrug. "I'm glad to see that you're enjoying this."

Tally chuckles. "It's your turn now. And there's always next game, you know."

"In response," you say absently, "I'll pay three to untap my Basalt Monolith."

You find yourself hoping to draw one of the other artifacts in your deck, probably so that you can cheat it into play with your Master Transmuter and still have enough mana up to activate Flamewave Invoker. However, all that you pull is a badly-timed Undying Rage... and you're not thrilled about the prospect of casting it and losing a potential blocker.

Then again, the Undying Rage gives you an idea. Maybe you can figure out a way to kill Tally before she finishes you off; it certainly beats having to sit back and die to either the Spellfist or the Serpent. But with your opponent at fifteen life, do you have the right tools for the job?

It is the start of your first main phase. Defeat Tally before the beginning of her next combat phase. 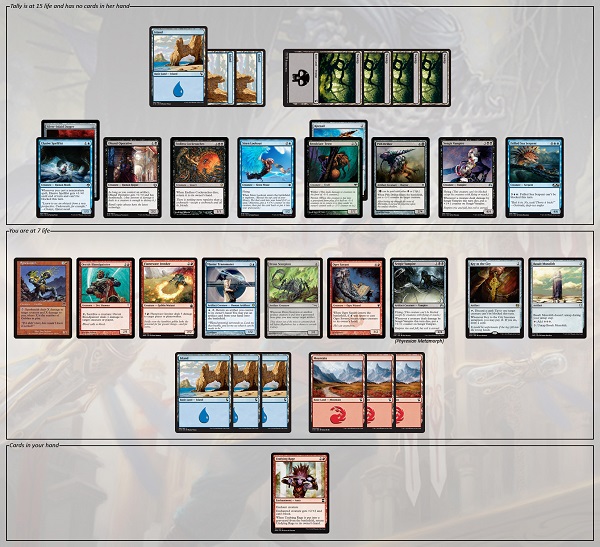 You have not yet played a land this turn. You know neither the identities nor the order of the cards remaining in your library.

Tally is at 15 life and has no cards in her hand. She has the following cards in play:

If you think you've got a great solution in mind, don't put it in the comments! Instead, send it to puzzles@gatheringmagic.com with the subject line "Puzzle - Adjustable Wrenches" by 11:59 P.M. EST on Monday, August20, 2018. We'll include the best ones in next week's article along with the next puzzle!

Marco Majoor hit the head on this one: "This is easy once you figure out that the damage dealt by Sower of Discord is a triggered ability," Marco writes, "so we just need to make sure to deal lethal damage before we croak!"

"This is a tricky one with a fair few red herrings," Addison Fox notes."Military Intelligence, Vial of Poison, and Giant Strength all look like they could be part of the solution, and turn out to be irrelevant.

"The key to solving this one is the word on the Skeleton Key: the keyword Skulk. As a failed experiment for an evergreen evasion mechanic for

, it lets 'irrelevant' things get through walls of beef by being beneath their notice. In our case, though, Ponch's walls tend toward the low power and we need to do some work to fix that."

Notably, the lowest power you have on your side of the table belongs to your Weaver of Lightning (or your Riptide Entrancer, should you turn it face up). This means that you need to deal with at least three potential blockers, but at least it's half of what you would have to handle otherwise. Bradley Dixon explains:

Technically, there's nothing stopping you from attacking with additional creatures. If you do so, however, Ponch has an out - he can block one of your other attackers with his Cabal Paladin, then use Vial of Poison to give your attacker deathtouch. This kills Cabal Paladin and leaves you unable to steal it with the Entrancer.

"These are some nice red herrings," Michael Feldman remarks."Who would have thought that the best way to deal with a bully saying 'Stop hitting yourself' would mostly be to ignore him just like teacher said?"