Login
0 Item
Advanced Search
Sign In
Create Account
You take a seat next to Mari. "So," you ask, "how's it going?"

"Wow, who rained on your parade?"

You glance at the board again. "Huh," you say. "I didn't notice that. Weird."

"Uh," Mari's opponent says from across the table, "I don't want to hold back or anything..."

"I just thought that maybe you should know that."

"It's not like you're attacking or anything," Mari says. "Neither of us are."

Hailey's face falls. "She's not very nice, is she?" she asks you.

"I guess Mari don't like you, when she likes everyone."

Mari punches you in the shoulder. "This Unabridged Cube just gets... uncooperative sometimes," she admits.

"Yeah, well, one of each card ever printed will do that," you say.

Hailey hesitates for a second, then taps a Forest and plays the last card in her hand. "I'll cast False Mourning," she says, "and I'll put my Engulfing Slagwurm on top of my library."

"That doesn't sound good," you remark.

"You don't know the half of it," Mari says. "I had the better draw until we traded one too many creatures, which is when the board stalled. At that point, she got that Jaddi Offshoot onto her side of the battlefield, and from there, she used a Thaumatic Compass to get back to double digits."

"I see that you managed to nail down that Serra's Guardian, though."

"That was a few turns ago," Mari says. "If she can get that Engulfing Slagwurm attacking, then that'll mean more life for her. I mean, I never like to admit that I was wrong, but I may have made some poor decisions here."

You notice a particularly interesting card on Hailey's side of the table. "Is that a card from Throne of Eldraine?" you ask.

"What, where?" Hailey asks.

"Oh, that," Hailey says. "I've been so caught up in my job and all, I didn't even realize there was a new expansion coming out."

"Three mana for a 5/5 is nice," Mari agrees, "but 1/1 tokens don't have much of a lifespan against my deck. Are you done with your turn?"

Mari untaps her permanents, and you're surprised to see Hailey untapping hers as well. "Am I missing something?" you ask.

"I have an Awakening," Hailey points out. "It lets us untap creatures and lands during each other's untap step."

"Sorry, I didn't see what's going on, having just walked in and everything."

Mari draws her card for the turn, adding a Guise of Fire to the Blood Lust and Alexi's Cloak in her hand. "That's not much to work with," she says.

All three of you stare at the board for a while, waiting for Mari to make a move. Finally she puts her hand face-down on the table in front of her, and then sighs.

"I think I can win this before that Slagwurm attacks," Mari says.

You raise an eyebrow. "You mean you can win the game this turn?" you ask.

"I didn't say that," Mari says. "What I meant was that I think I can win this game on Hailey's next turn."

"Okay," Hailey says skeptically. "Now I'm wondering how you can possibly do that."

"Oh, I'm not," Hailey says. "Honestly. I just can't for the life of me figure out how you can get through a packed board for ten damage. I'd be seriously impressed if you could do that."

It is the start of your first main phase. Defeat Hailey before the beginning of her next combat phase the end of her next turn. 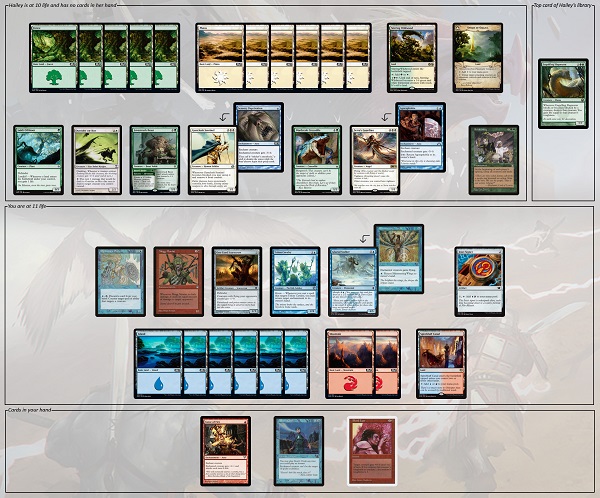 You are at 11 life, with the following cards in play:

Hailey is at 10 life and has no cards in her hand. She has the following cards in play:

Hailey currently has an Engulfing Slagwurm on top of her library.

If you think you've got a great solution in mind, don't put it in the comments! Instead, send it to puzzles@gatheringmagic.com with the subject line "Puzzle - Love Yourself" by 11:59 P.M. EST on Monday, September 16, 2019. We'll include the best ones in next week's article along with the next puzzle!

"In this week's puzzle," Addison Fox writes, "we are able to capitalize on Slim getting a little greedy and going down an extra blocker for the mana. There are a lot of tricky things you can do with Jiang's ability to make White mana, like tucking our equipment with Natural Obsolescence and Stoneforging it back, but as it turns out, we have a clean kill thanks to the power of overlapping evergreen keywords."

"Slim will, in fact, die by the sword," Nick Barone notes:

"Note that we do not attack with the Ghitu Encampment," Nick warns, "because a block by Souls of the Faultless after first strike damage will slip Slim up to 9 life, and his blocks could leave him alive at one. The way this is planned out, Slim goes down with that Souls of the Faultless trigger on the stack."

Dan Wilson has an alternative take on a solution, though. "At first," Dan writes, "I was trying to overthink this puzzle. But then I realized our forces outnumbered theirs:

"When you live by the sword," Russell Jones writes, "life can be really simple. You just charge into battle with a giant sword. And a hammer for some reason. Everything else takes care of itself!"