Slim rolls his toothpick from one side of his mouth to the other, and smiles. "What'll it be?" he asks.

You glance at your scorepad. You really don't want to have to pay life for Slim's Indulgent Tormentor, not when both your life totals are low and you can see the end of this game within reach. But you might not have much of a choice: You'd rather not go down another creature, and giving Slim an extra card isn't a better prospect.

You grab your pen and start scratching out numbers. "I'll lose the three life," you say.

"Fair 'nough," Slim drawls, and draws a card. He studies it for a moment.

"Don't be shocked by the tone of mah voice, then," Slim says, tapping two lands and dropping a Stoneforge Mystic onto the table. Your opponent picks up his deck and starts riffling through it.

You stare at the Mystic for a while. Normally you'd be glad to see it on the table, especially considering that it's just been unbanned in Modern. However, you're not playing Constructed at the moment, and the Unabridged Cube is taking no prisoners as usual. With one of each card ever printed at your disposal, Slim could have any piece of equipment waiting in his deck.

As it turns out, he only has one: Slim taps four lands and adds a Moonsilver Spear to the battlefield. Then he touches the three lands he has remaining, and hesitates.

"You've still got a Manakin," you say, helpfully.

Slim rolls the toothpick to the other side of his mouth. "Yeah," he says. "Just wonderin' if it's worth tapping out."

Eventually he bites the bullet and attaches the Spear to his Indulgent Tormentor. "Can't pay nothin' for anythin' else anyway," he remarks. "Ah'll attack with just the Demon."

That puts the pressure back to you. So far you've had a Qasali Slingers holding back the Tormentor, but even with a Forebear's Blade, it's clearly not big enough to withstand 5 power worth of first strike damage. On top of that, the Moonsilver Spear just gave your opponent a second big flyer - you watch as Slim reaches over and gently nudges an Angel token onto the table.

You shake your head and push your Fire Sprites forward. You hate to lose them, seeing as they've only just recently received the first +1/+1 counter from your Jiang Yanggu, Wildcrafter. However, you're rather not lose your Qasali Slingers yet, and your only other alternative is to take five damage while sitting at three life.

Slim nods, and you drop the Fire Sprites into your graveyard. "Your move," he says.

You untap your permanents and are just about to draw a card when Slim stops you. "Yer Branded Howler," he points out.

"Oh yeah," you say, transforming your Branded Howler back into a Convicted Killer. "Sorry about that."

Slim just chews on his toothpick a little more.

You draw a Natural Obsolescence, which is a little too late for your taste: If it had been in your hand last turn, you would have been able to take down Slim's Tormentor in combat. As it stands, removing the Spear now won't do much - Slim's still attacking with both his Demon and Angel next turn, and you only have the Slingers to block.

You could fall back on your mainstay, though, which is to somehow find a way to win the game out of nowhere. But you've got a lot of obstacles to work through, and you need a moment to consider this.

"Do you think I can still win this one?" you ask Slim, idly.

"What's that supposed to mean?"

"How should ah know? It's not like ah'm supposed to help yeh here. It's yer call."

It is the start of your first main phase. Defeat Slim before the beginning of his next combat phase. 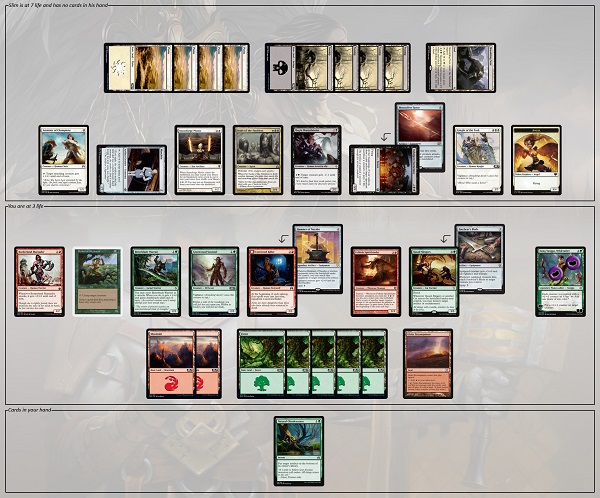 Slim is at 7 life and has no cards in his hand. He has the following cards in play:

If you think you've got a great solution in mind, don't put it in the comments! Instead, send it to puzzles@gatheringmagic.com with the subject line "Puzzle - Die By the Sword" by 11:59 P.M. EST on Monday, September 9, 2019. We'll include the best ones in next week's article along with the next puzzle!

Last week's puzzle ran into an issue where an older version of the article (using Junk Diver) was inadvertently posted. This was quickly corrected with the correct version that uses Myr Retriever - the Junk Diver version has no solution within the requirements!

"The original printing of this puzzle had a very interesting infinite loop," Addison Fox notes, "but not one that led to victory, merely wheelspinning. The current modification (with Myr Retriever) is much more amenable to our victory:

"Note that Worship and Guardian Seraph are useless here," Max Bernstein writes, "since they prevent damage, not loss of life. (Yay technicalities!)"