Youâre giving Adam Styborskiâs Pauper Cube a try today, and after an hour of drafting and playing, you figure that itâs a deeper format than you expected. Now youâre playing against Stybs himself, and much as you would expect, heâs rolling over you.

Youâre playing a decent enough R/W deck; the problem is that youâve run into two pockets of land so far, while Stybs has been hitting a lot of his creature drops. You managed to bring a Sparksmith out, and itâs been doing some work while Stybs searches for removal. But it hasnât been enough to get you past his blockers, and your life totalâs been in danger ever since he stuck a Vulshok Morningstar on his Dauthi Horror.

After you stop the Horrorâs damage this turn by flashing back the Prismatic Strands in your graveyard, Stybs decides to go all-in. He casts Treasure Cruise to put three cards in his hand, and then he plays a land and uses the rest of his mana to cast Dauthi Slayer and Lotus Path Djinn. This puts him in a position to win next turn unless you draw something relevant.

You untap, find out that your draw is a Mogg War Marshal, and plot your course. You have the advantage in terms of cards, but Stybs has more creatures in play and is unreachable at his current life total. Or is he?

It is the start of your first main phase. Defeat Stybs before the end of your turn. 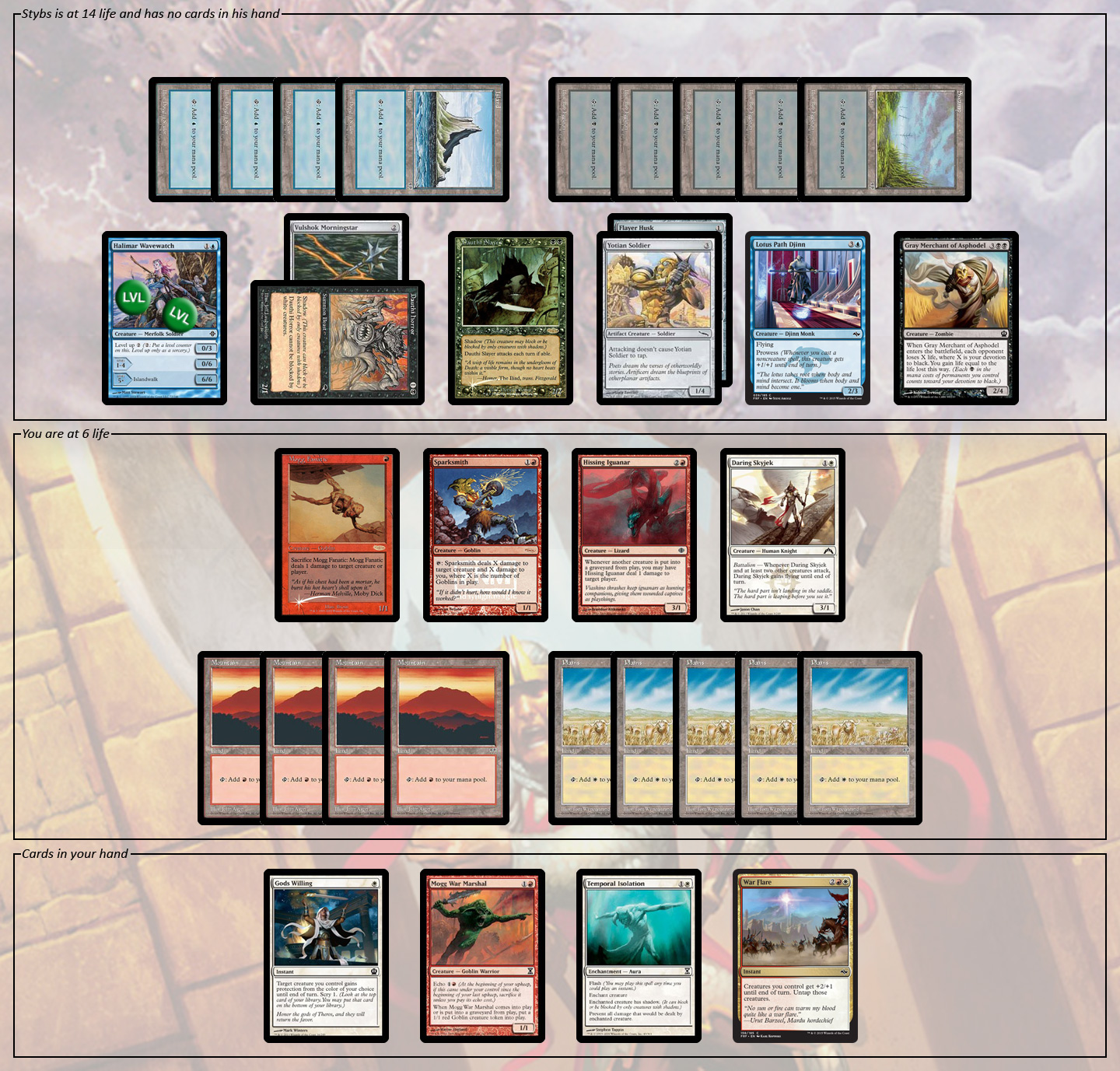 You have not yet played a land for this turn. You do not know the identities of any of the other cards in your library.

Stybs is at 14 life and has no cards in his hand. He has the following cards in play:

If you think you have a great solution in mind, donât put it in the comments! Instead, send it to puzzles at gatheringmagic dot com with the subject line âPuzzle â Tightropeâ. Weâll include the best ones in next weekâs article along with the next puzzle!

âThis is a perfect game,â Martin Bobovsky remarks, âwhere you play your whole hand and use all your possible mana sources.â

Everyone above picked up on the interaction that was at the heart of this puzzle, which involved casting Reclaiming Vines on your own Aligned Hedron Network. But before we get to that, thereâs the matter of assessing the state of the table. Robert Rugart writes:

Our opponent is clearly in a superior position here, and I do not relish the idea of letting him untap and attack next turn, so clearly we have to do something right now.

Fortunately, we have plenty of mana to spend, and just drew the only card in our deck that gives us a hope against his armies. Unfortunately, at the moment, that card only removes one creature on the board, and even with all of his blockers gone, our team can only swing for 8 damage plus 4 from our combat tricks.

âThe key here,â Caleb Yarbrough writes, âis that Tajuru Warcaller, despite appearing spent, is actually very useful. Our pump spells can do more than increase our damage output or let us fight our opponent's creatures successfully: They can make creatures bigger so that they are exiled by Aligned Hedron Network. While the obvious use for Reclaiming Vines would be to destroy the awakened land, the way we can win with it is to reclaim the Aligned Hedron Network.â

There are some numbers involved here, so Iâll defer to Hyman Rosenâs well-organized solution:

Erin-Dixon Gonzalez notes that there are two particular rule interactions that make this solution possible:

Also of note is that quite a few people missed the Shatterskull Recruit interaction (Recruit also is exiled by the Network and comes back as an untapped 4/4 blocker) and/or the Retreat to Hagra interaction (since Ravleenâs Mountain returns to play, this potentially gives her 1 more life to work with).

Reuben Covington remarks: âYou can sacrifice the Hedron Archive, draw two cards, and hope for an Ally, cast that Ally to trigger Tajuru Warcaller, use Reclaiming Vines to kill the awakened Mountain, and swing for lethal, not caring if something is blocked by Endless One.â (Curiously enough, drawing a land would have worked as well, as it would have given your Snapping Gnarlid the extra +1/+1 needed for a direct attack.)

Finally, Quadrangolo Tetra noticed something interesting flavor-wise: âHaving the Shatterskull Recruit be a Kozilek's Channeler and the Blisterpod a Cliffside Lookout would have made the scenario very much Zendikar versus Eldrazi. Itâs not necessarily an objective of the column, but itâs still a nice little extra that could have been.â