Login
0 Item
Advanced Search
Sign In
Create Account
CJ scratches his head. "So how does your opponent's deck work again?" he asks Mari.

"It's a Cleric deck," Mari explains. "It gains life and plays defense to slow down the game. Then, when its life total goes low, it searches up a Transcendence and gains all that life back."

"Won't that just give him another losing condition when he hits twenty life?" you ask.

"He's got control cards. On our first go-around, he got rid of the Transcendence with a War Priest of Thune. Then, after my Wildblood Pack put him back at low life, he just pulled the Transcendence out of his graveyard with a Monk Idealist."

"I can see where that can be a problem."

"I'm still not clear on the win condition, though."

"It's running better than CJ's Werewolf deck, I'll give him that," Mari says.

Your local game store's annual 'Creature Feature' tournament has turned out to be more popular than expected, even with the face mask rules and the physical distancing requirements. With some people still staying at home (at least until this event), you're seeing more than the usual innovative creations for a tournament built around creature types.

"Nothing," Mari says. "It's just that it doesn't exactly do much."

"I'm not saying it's not on theme," Mari says in an even voice. "You've got all the cards that work around werewolves and transforming and everything... but that's it. All your creatures really do is sit around, transform into bigger creatures, and attack."

"But that's how it's supposed to work," CJ complains. "Maybe you just ran into one of its weaknesses."

"You're about to start your turn," Chaney says. "Don't forget - I cast both Avacynian Missionaries and Vito, Thorn of the Dusk Rose last turn, so you'll have to transform some of your creatures."

"Okay, so Moonscarred Werewolf becomes Scorned Villager, and Ravager of the Fells becomes Huntmaster of the Fells. That gives me a Wolf token and gains me two life."

"Wait, you gain two life from Huntmaster of the Fells?"

"That's what it says," Mari shrugs.

"Shucks," Chaney says. "I should have attacked."

"You'll get your chance next turn, I think. Between Vito and that Attended Healer of yours, you might just end this."

Mari draws a card, and then considers it for a while. It's a Malevolent Whispers, but you don't immediately see its relevance to the situation. Maybe Mari's planning something in combination with the Moonmist in her hand.

"I guess what I'm saying is that my deck follows a straight plan," CJ claims. "It doesn't go into complicated combos, but it still works."

"I'm not saying that your deck doesn't work," Mari says, brushing him away, "or that it uses a lot of complicated plays."

"It's boring, that's what's wrong with it," Mari snaps. "But then again, you probably didn't anticipate what I'm about to do here."

It is the start of your first main phase. Defeat Chaney before the beginning of his next combat phase. 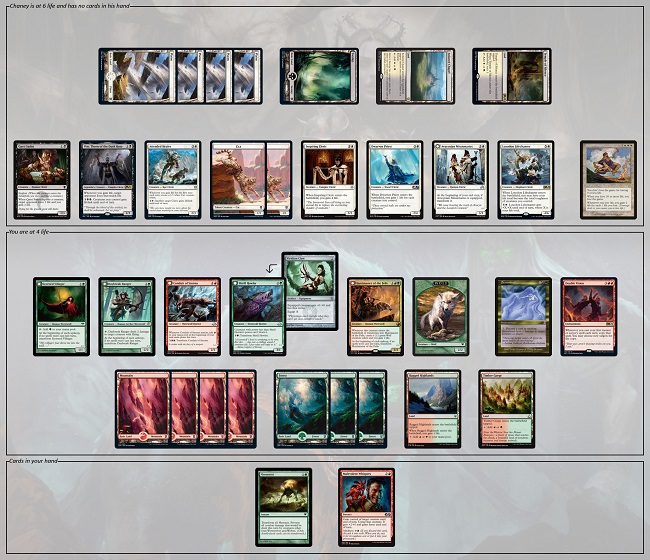 Chaney is at 6 life and has no cards in his hand. He has the following cards in play:

Instead, if you think you've got a great solution, you can send your solution to puzzles@gatheringmagic.com with the subject line "Puzzle - Sheep's Clothing" by 11:59 P.M. EST on Monday, November 2, 2020. We'll include the best ones in next week's article along with the next puzzle!

"With a lot of blockers," Greg Dreher writes, "you're going to need an evasive threat. My first thought is to take Sylvia's Moldgraf Monstrosity, which has trample. If you can give it flying, and then tap her two toughest creatures that have flying or reach, you'll still need to get Moldgraf Monstrosity to 14 power. The numbers there don't add up."

"There are two keys to this puzzle," Jacob Butcher notes:

"The big red herring of the puzzle is Zephyr Scribe," Michael Feldman adds. "A creature that could be used multiple times to put more cards in your graveyard is awfully tempting when you need to exile three graveyard cards for a key spell. Alas, you just don't have the mana for that ability. Besides, he runs exactly counter to the theme - drawing your resources just to discard the same amount is hardly environmentally friendly (and leaves you open to effects like Emrakul, the Aeons Torn):

It's worth noting that Leonin Battlemage's untap ability only triggers whenever you cast a spell. This means that the Battlemage will work off Ray of Command and Sleep of the Dead, but not Gryff's Boon in this case - you're only activating the Boon's ability, after all!

"And of course," Greg adds, "seeing Consulate Dreadnought sailing through the mountains is sure to make Torgle, mountaintop boatmaker once again say 'Who's the crazy one now?'."