Mari slides into the seat next to you. "That's a lot of spiders," she says.

"It's not my fault," your opponent says, shaking her head. "We had a lot of them tabling during the draft. I also have a Gloomwidow and an Ember Weaver in my deck."

"You can imagine how my

deck's dealing with them," you muse.

"It could be worse," Mari says, scratching her head. "You could be facing the more aggressive ones."

deck, you don't look like any flyers. All I see is a Ticking Gnomes with a Gryff's Boon."

"I sided most of the small ones out. They're not going to be able to get past things like Hitchclaw Recluse anyway. I still have some big ones in the deck somewhere."

"You had that Drifting Djinn," your opponent points out.

"I had a Drifting Djinn that ran into her Red Sun's Zenith," you explain. "That's the Unabridged Cube for you: One of each card ever printed. More like one of each answer ever produced."

"At least you've got a Consulate Dreadnought," Mari says.

"I don't exactly have the creatures to spare for it," you say, sadly. "And now that Sylvia's cast that Moldgraf Monstrosity of hers, I might need to hold back the Dreadnought to block."

"I haven't been able to off your Zephyr Scribe, though," Sylvia says. "So, if you think about it, you're still able to loot for solutions."

You're not quite sure what kind of solution you're supposed to be digging for, though, especially as none of your other big flyers are anything to write home about. Sylvia's also displayed a knack for aiming her direct damage spells at your most critical cards, so taking down her life total has been an absolute chore for you.

"Aside from Syr Alin, I mean."

"You could have just told me that you've only started your turn," Mari says flatly.

"Yeah, but you looked so invested in trying to figure that out."

You show her the Ray of Command in your hand. Sylvia shrugs - she doesn't have anything in her hand herself, but it's not like she hasn't been drawing well.

Mari thinks for a little while. "That's interesting," she says.

"That's an even more interesting tone of voice," you say, looking at her sideways.

"What tone of voice?"

"That tone you use whenever you see a good play coming."

"You mean you can tell?" Mari asks.

You shake your head. "I can tell you that it's definitely there."

You sigh. "Okay, I'll make a play. It might not be the good one Mari sees, though."

It is the start of your first main phase. Defeat Sylvia before the beginning of her next combat phase. 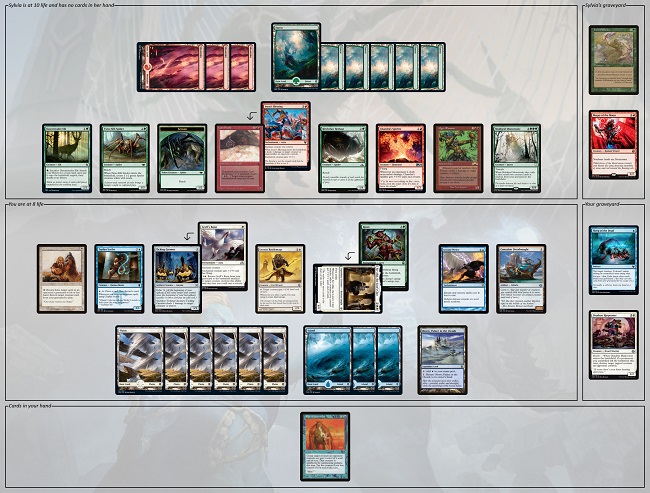 Sylvia is at 10 life and has no cards in her hand. She has the following cards in play:

Sylvia has the following cards in her graveyard:

Instead, if you think you've got a great solution, you can send your solution to puzzles@gatheringmagic.com with the subject line "Puzzle - Reduce, Reuse, Recycle" by 11:59 P.M. EST on Monday, October 26, 2020. We'll include the best ones in next week's article along with the next puzzle!

Solving this puzzle involves some observation of its many moving parts. Experiment Kraj is by far the dominant card, but while this gives you a lot of opportunity for interaction, Kraj doesn't immediately show you how to win this game.

In his submission, Hyman Rosen points out the following:

As it turns out, both of Black Carriage's abilities are relevant here. In fact, to allow for its activated ability, Greg Dreher shows that most of your moves need to take place during your upkeep:

The question of "Should I pay the upkeep cost of Binding Grasp?" therefore has a non-obvious answer: It doesn't matter, as long as you can stack your abilities correctly!